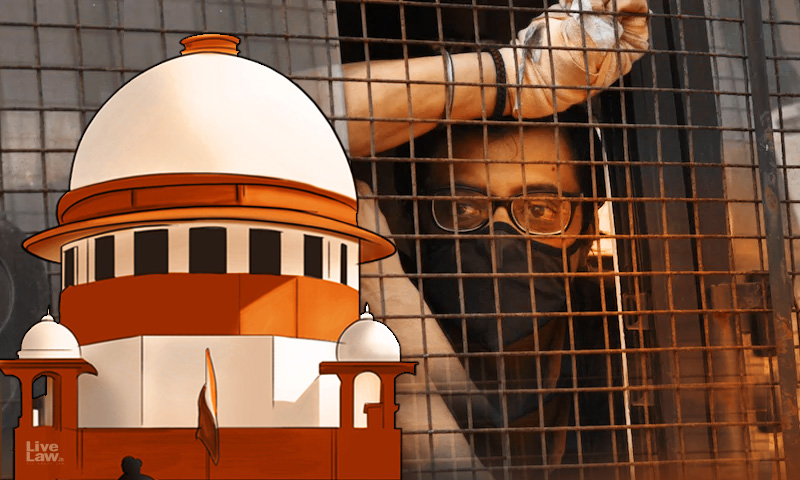 The Supreme Court, in its judgment today, observed that, on prima facie evaluation of FIR lodged against Arnab Goswami, it cannot be said that he was guilty of having abetted the suicide within the meaning of Section 306 of the IPC. The bench comprising Justices DY Chandrachud and Indira Banerjee said that the High Court failed to evaluate prima facie whether the allegations...

The Supreme Court, in its judgment today, observed that, on prima facie evaluation of FIR lodged against Arnab Goswami, it cannot be said that he was guilty of having abetted the suicide within the meaning of Section 306 of the IPC.

The bench comprising Justices DY Chandrachud and Indira Banerjee said that the High Court  failed to evaluate prima facie whether the allegations in the FIR, taken as they stand, bring the case within the fold of Section 306 read with Section 34 of the IPC.

Having noted thus, the bench referred to various precedents and observed:

The FIR recites that the spouse of the informant had a company carrying on the business of architecture, interior design and engineering consultancy. According to the informant, her husband was over the previous two years 'having pressure as he did not receive the money of work carried out by him'. The FIR recites that the deceased had called at the office of the appellant and spoken to his accountant for the payment of money. Apart from the above statements, it has been stated that the deceased left behind a suicide note stating that his ―money is stuck and following owners of respective companies are not paying our legitimate dues. Prima facie, on the application of the test which has been laid down by this Court in a consistent line of authority which has been noted above, it cannot be said that the appellant was guilty of having abetted the suicide within the meaning of Section 306 of the IPC.

In this regard, the bench referred to Amalendu Pal vs State of West Bengal (2010) 1 SCC 707, in which it was held that, before a person may be said to have abetted the commission of suicide, they ―must have played an active role by an act of instigation or by doing certain act to facilitate the commission of suicide. In Madan Mohan Singh vs State of Gujarat (2010) 8 SCC 628, it was observed that the suicide note expressed a state of anguish of the deceased and ―cannot be depicted as expressing anything intentional on the part of the accused that the deceased might commit suicide.  The court also referred to the judgment in Vaijnath Kondiba Khandke vs. State of Maharashtra (2018) 7 SCC 781, in which it was observed that merely because a superior officer assigned work to his junior officer and took actions against him like stopping of his salary, he cannot be held to have a guilty mind or criminal intent, to attract offence under Section 306 of the Indian Penal Code, for abetment of suicide.

The bench, in particular, noted the decision in Praveen Pradhan vs State of Uttaranchal (2012) 9 SCC 734  in which the court had dismissed an appeal against the rejection of an application under Section 482 of the CrPC by the High Court for quashing a criminal proceeding, implicating an offence under Section 306 of the IPC. The court said that, in that case the contents of the FIR therefore indicated that the deceased had been subjected to harassment persistently and continuously and this was coupled by words used by the accused which led to the commission of suicide. Similarly in Narayan Malhari Thorat vs Vinayak Deorao Bhagat (2019) 13 SCC 598 [in which court reversed a High Court judgment quashing FIR u/s 306], the court noted that there was a specific allegation in the FIR bearing on the imputation that the respondent had actively facilitated the commission of suicide by continuously harassing the spouse of the victim and in failing to rectify his conduct despite the efforts of the victim.

The court clarified that the above observations are prima facie at this stage since the petition seeking quashing of FIR is still pending before the High court. The court observed that the Bombay High Court failed to discharge its adjudicatory function at two levels – first in declining to evaluate prima facie at the interim stage in a petition for quashing the FIR as to whether an arguable case has been made out, and secondly, in declining interim bail, as a consequence of its failure to render a prima facie opinion on the first.

"If the High Court were to carry out a prima facie evaluation, it would have been impossible for it not to notice the disconnect between the FIR and the provisions of Section 306 of the IPC. The failure of the High Court to do so has led it to adopting a position where it left the appellant to pursue his remedies for regular bail under Section 439. The High Court was clearly in error in failing to perform a duty which is entrusted to it while evaluating a petition under Section 482 albeit at the interim stage."

In the backdrop of these principles, it has become necessary to scrutinize the contents of the FIR in the case at hand. In this batch of cases, a prima facie evaluation of the FIR does not establish the ingredients of the offence of abetment of suicide under Section 306 of the IPC. The appellants are residents of India and do not pose a flight risk during the investigation or the trial. There is no apprehension of tampering of evidence or witnesses. Taking these factors into consideration, the order dated 11 November 2020 envisaged the release of the appellants on bail.