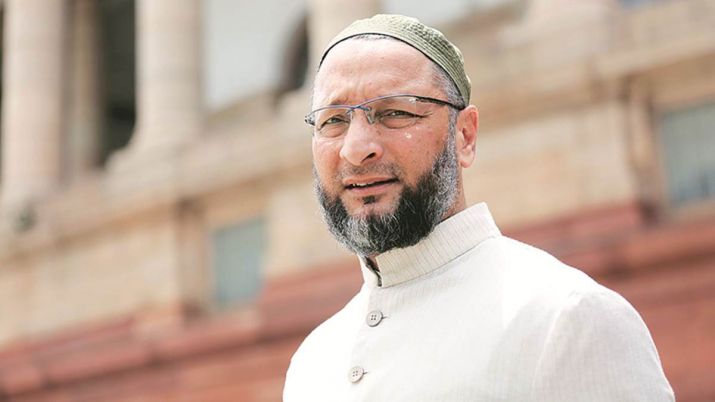 Lok Sabha MP and All India Majlis-e-Ittehadul Muslimeen President Asaduddin Owaisi on Saturday moved Supreme Court challenging the Constitutional validity of Citizenship Amendment Act on grounds that it pushes forcible conversion, discriminates on ground of religion and illegally divides migrants while urging that the court lift the veil and see the "unholy nexus" between the Act...

Lok Sabha MP and All India Majlis-e-Ittehadul Muslimeen President Asaduddin Owaisi on Saturday moved Supreme Court challenging the Constitutional validity of Citizenship Amendment Act on grounds that it pushes forcible conversion, discriminates on ground of religion and illegally divides migrants while urging that the court lift the veil and see the "unholy nexus" between the Act and the National Register of Citizens exercise being carried out in Assam.

In his petition filed by advocate M R Shamshad, Owaisi said the Amendment Act fails to clear the test of reasonable classification based on an intelligible differentia as it primarily aims to alter the current Citizenship Act, 1955 to provide for the acquisition of Indian citizenship for a certain category of 'illegal migrants' from only Afghanistan, Pakistan and Bangladesh, who had been granted certain exemptions earlier under the Impugned Notifications.

Owaisi says the Act is an affront to the doctrine of Constitutional Morality which, he said, can be traced back to B R Ambedkar speaking during the Constituent Assembly debates wherein he said that "in the name of democracy there must be no tyranny of the majority over the minority" as he challenged the "arbitrary differential treatment of immigrants from only the enumerated religions -- Hinduism, Sikhism, Buddhism, Jainism, Zoroastrianism and Christianity -- from only Aghanishtan, Bangladesh and Pakistan".

Act discriminates on basis of religion

The MP from Hyderabad who earlier tore the copy of the Amendment Bill in the Lok Sabha said, the present Amendment Act miserably fails on the touchstone of Article 14 and the parameters for non-arbitrariness provided therein.The Act is primarily focused on establishing a religion-based classification which is, in and of itself, an impermissible classification and therefore violative of Articles 14, 21 and 25 of the Indian Constitution. In other words, the criterion laid down in the Act for acquiring citizenship does not meet the test of 'intelligible differentia'.

"Any classification based solely or primarily on a religious identity ipso facto violates Article 14 of the Indian Constitution, wherein the legislation effectuates discrimination on the basis of the intrinsic and core identity of the individual i.e. religious identity of the individual. In fact, the Act explicitly discriminates against Muslims. The Act extends the benefit to individuals professing the faiths of Hinduism, Sikhism,Buddhism, Jainism, Zoroastrianism and Christianity but excludes the same benefit to the individuals practising Islam on a specious and unsubstantiated ground that they do not experience persecution in these countries. Since the Act discriminates on the basis of religious identity, it cannot form a reasonable classification based on intelligible differentia," says the petition which also challenges the MHA notification amending the passport rules and the Foreigners Order.

He cites the SC observation in Navtej Johar's (decriminalising homosexuality) case and points out that Justice Indu Malhotra had in her concurring opinion held, "Where a legislation discriminates on the basis of an intrinsic and core trait of an individual, it cannot form a reasonable classification based on an intelligible differentia".

Owaisi further said that "even an illegal migrant has the right not be deprived of his/her personal liberty except according to procedure established bylaw".

"After the coming into force of the Impugned Notifications and the Amendment Act, an illegal migrant who is prosecuted under the Passports (Entry into India) Act, 1920 or the Foreigners Order, 1949 will be so prosecuted for being an illegal migrant because he/she does not belong to one of the exempted religions. Ex facie, such a procedure for taking away a person's liberty will be vitiated by unreasonableness,resulting in a violation of his/her right under Article 21," it said.

The petition further submits that the "impugned Notifications or the Amendment Act neither impose any requirement to prove religious persecution or a reasonable fear of religious persecution, nor prescribe a standard for the same. On the contrary, a law that purports to have as its object the protection of religious minorities of certain countries presumes that all illegal migrants from the enumerated religious minorities were persecuted in the said countries and have entered the territory of India to escape religious persecution, without calling upon them to establish or even claim that fact. The very factum of being an illegal migrant entitles persons from the specified communities and countries to citizenship,which is per se unreasonable and arbitrary".

Owaisi further states that with there being no requirement prove or even claim persecution for applying for citizenship, the Amendment Act clearly appears to have an unholy nexus with the National Register of Citizens "NRC" exercise,aimed at identifying "illegal migrants" residing in India. While the NRC exercise that is ongoing in Assam and is sought to be initiated in the rest of the country, at its logical culmination, would result identification of persons as "illegal migrants", the Amendment Act seeks to simultaneously offer illegal migrants who are Hindu, Sikh,Buddhist, Jain, Parsi or Christian citizenship on the presumed ground of persecution. This Hon'ble Court must lift the veil and see the nexus between the NRC, the Impugned Notifications and the Amendment Act as part of one seamless chain and set the Amendment Act aside as vitiated by political mala fides, ex facie discriminatory and manifestly arbitrary".

Stressing that the Act violates Freedom of Religion under Article 25, the petition highlights that, "The Amending Act, particularly Section 6, offers an incentive to persons from Afghanistan, Bangladesh and Pakistan to change their faith so as to avail the relaxed requirement of only five years of residence for obtaining Indian citizenship, down from eleven years prescribed under the Third Schedule to the Citizenship Act, 1955.

"Forcible conversion" has been defined in various statues in India as the offering of any allurement for converting from one religion to another, and its prohibition has been upheld by this Hon'ble Court as constitutional in Rev Stainislaus v. State of Madhya Pradesh, (1977) 1 SCC 677. The offering of incentives by the State to any category of persons following one or more specified religions and not to persons of other faiths in the same category would amount to violation of the freedom of religion available to "all persons" under Article 25.

"The effect of the Amendment Act must be seen in conjunction with the Long-Term Visa scheme introduced for Hindus, Sikhs, Buddhists, Jains, Parsis and Christians coming from Afghanistan, Pakistan and Bangladesh in 2016. The present legal regime is that a Hindu coming into India from a war-torn country like Afghanistan will be granted long-term visa and will be put on the fast track for citizenship to be granted after 5 years of residence. Whereas a Muslim from the same country seeking refuge will not be eligible for long-term visa and will have to reside in India for 11 years before he/she can apply for citizenship. This is nothing short of incentivizing conversion by the State in gross violation of Article 25," says the petition.

Congress MP TN Prathapan also alleged that the Act violated the foundational principles and moral fabric of the Constitution; blatantly contravenes the provisions of Article 14, 21 & 25 and also the basic structure of the Constitution.

Petition contended that the the idea of religious persecution or forced migration is not necessarily linked with the group's religiosity alone. Any group or individual including atheists irrespective of their affiliation with minority or majority groups may be subjected to persecution or forced migration from their country if their views do not conform to the dominant sectarian clergy norms enjoying the support of the ruling establishment.

A serious lacuna in the Citizenship Amendment Act, 2019 based on Article 14 that grants right to equality and against discrimination based on religion, is that the Act provides differential treatment to illegal migrants on the basis of their country of origin, religion, date of entry into India, and place of residence in India. Therefore, it must be opposed by all those who continue to believe in a plural, egalitarian, and democratic India, where religion is not a brand that can condemn individuals to perpetual second class citizenship. And it must be opposed in the courts, as a flagrant violation of equality and the rule of law.

The petitioner submitted that the text of the Act not only undermines that objective, but also renders the plural fabric of the Indian Constitution. In its careful listing of protected communities, it explicitly and intentionally leaves out Muslims. The message it sends, thus, is one of discrimination, exclusion and second-class citizenship based on religion. Article 14 prohibits the state from engaging in irrational classification of persons, from arbitrary action, and from treating people unequally for no legitimate reason. This Act manages to violate each of these three principles. Its exclusion of Muslims from the list of protected communities in Pakistan, Afghanistan, and Bangladesh in the teeth of the documented persecution of the Ahmadiyyas is an irrational classification if the goal is to protect persecuted minorities. The restriction of the to just these three countries is entirely arbitrary, as there is no underlying principle that connects them.

The petitioner also submitted that the act does not pass the test of reasonable classification because it discriminates and arbitrarily excludes Muslims from its compass The act, by distinguishing illegal immigrants on the basis of religion settles the concept of equality, a fundamental right and basic structure of Constitution. Power to pick and choose as proposed in the bill has been discarded as arbitrarily and against Article 14 in several landmark cases of Supreme Court.

The Petition was filed through Advocate Suvidutt.MS