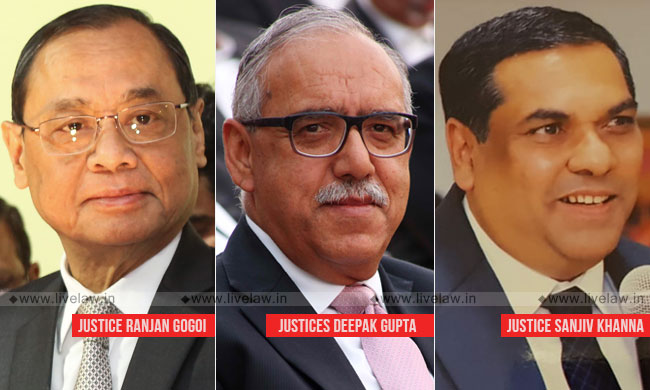 x
"If a police officer is given the power to seize immovable property it may lead to an absolutely chaotic situation."

The Supreme Court has held that the expression 'any property' appearing in Section 102 of the Code of Criminal Procedure would not include 'immovable property'. The bench comprising Chief Justice Ranjan Gogoi, Justice Deepak Gupta and Justice Sanjiv Khanna observed thus while holding that a power of a police officer under Section 102 of the Criminal Procedure Code to seize any property,...

The Supreme Court has held that the expression 'any property' appearing in Section 102 of the Code of Criminal Procedure would not include 'immovable property'.

The bench comprising Chief Justice Ranjan Gogoi, Justice Deepak Gupta and Justice Sanjiv Khanna observed thus while holding that a power of a police officer under Section 102 of the Criminal Procedure Code to seize any property, which may be found under circumstances that create suspicion of the commission of any offence, would not include the power to attach, seize and seal an immovable property.

This provision deals with the Power of police officer to seize certain property. It provides that "Any police officer may seize any property which may be alleged or suspected to have been stolen, or which may be found under circumstances which create suspicion of the commission of any offence."

The majority judgment of the Full Bench of Bombay High Court had held that the expression 'any property' used in sub-section (1) of Section 102 of the Code of Criminal Procedure does not include immovable property and, consequently, a police officer investigating a criminal case cannot take custody of and seize any immovable property.

While considering appeals filed against this judgment [Nevada Properties Private Limited Vs. State Of Maharashtra], the Apex Court bench had referred the case to larger bench observing that the issues have far reaching and serious consequences.

Tapas D. Neogy Judgment did not deal with this issue

The minority judgment of the High Court in this case had relied on the Supreme Court judgment in State of Maharashtra v. Tapas D. Neogy to hold that the provision would include 'immovable property' also.

The Apex Court, while answering the reference, noted that in Tapas D. Neogy, the issue considered by the bench was whether a bank account of an accused or any relation of the accused was 'property' within the meaning of Section 102 of the Code and if so, whether the Investigating Officer has the power to seize the bank account or issue a prohibitory order restraining operation of the bank account. In the said judgment, it was held that the bank account of the accused or any of his relations is "property" within the meaning of Section 102 of the Criminal Procedure Code and a police officer in course of investigation can seize or prohibit the operation of the said account if such assets have direct links with the commission of the offence for which the police officer is investigating into.

Money is not an immovable property

Explaining the purport of the said judgment, the bench observed:

Elaborately referring to the discussion made in Tapas D. Neogy (supra), the bench concluded that it did not decide the issue in question; whether or not an immovable property will fall within the expression 'any property' in Section 102 of the Code.

Explaining the Scope of Section 102 CrPC, the bench observed:

Disputes relating to title, possession, etc., of immovable property to be adjudicated in Civil Courts

The bench further noted that disputes relating to title, possession, etc., of immovable property are civil disputes which have to be decided and adjudicated in Civil Courts and that the Courts must discourage and stall any attempt to convert civil disputes into criminal cases to put pressure on the other side

Taking note of the expression 'circumstances which create suspicion of the commission of any offence' in Section 102, the bench observed that the same does not refer to a firm opinion or an adjudication/finding by a police officer to ascertain whether or not 'any property' is required to be seized. It said:

The word 'suspicion' is a weaker and a broader expression than 'reasonable belief' or 'satisfaction'. The police officer is an investigator and not an adjudicator or a decision maker. This is the reason why the Ordinance was enacted to deal with attachment of money and immovable properties in cases of scheduled offences. In case and if we allow the police officer to 'seize' immovable property on a mere 'suspicion of the commission of any offence', it would mean and imply giving a drastic and extreme power to dispossess etc. to the police officer on a mere conjecture and surmise, that is, on suspicion, which has hitherto not been exercised.

Justice Gupta explained this with a couple of illustrations as follows:

To give an example, if there is a physical fight between the landlord and the tenant over the rented premises and if the version of the appellant is to be accepted, the police official would be entitled to seize the tenanted property. This would make a mockery of rent laws. To give another example, if a person forges a will and thereby claims property on the basis of the forged will, can the police officer be given the power to seize the entire property, both movable and immovable, that may be mentioned in the will? The answer has to be in the negative. Otherwise it would lead to an absurd situation which could never have been envisaged by the Legislature. The power of seizure in Section 102 has to be limited to movable property.