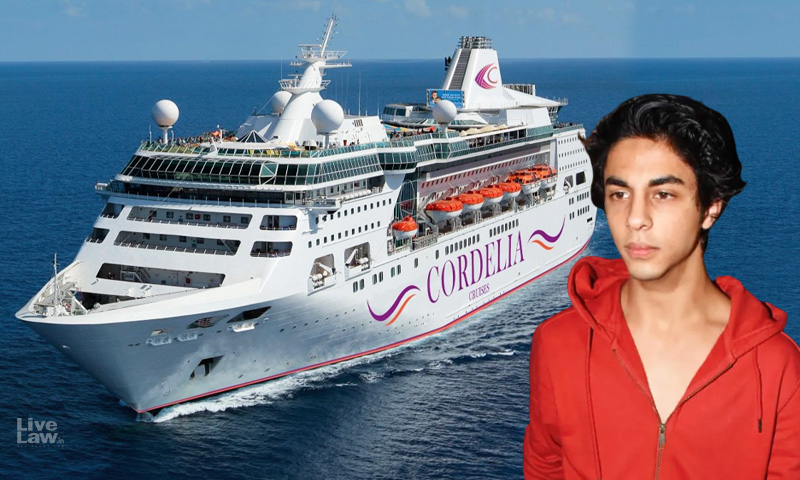 The Narcotics Control Bureau (NCB)'s SIT dropped Aryan Shah Rukh Khan and five others from its charge sheet submitted in the Sessions Court on Friday in the October 2021 cruise ship drug bust.

The Special Investigations Team (SIT) that took over the case after allegations of corruption and false implication emerged against officers of the NCB, cited lapses in the investigation like no formal seizure of Khan's phone, non-recovery of drugs from him, absence of a medical test to prove consumption as some of the reasons to drop charges against him.

Aryan Khan was arrested on October 3, 2021, and spent nearly a month in prison before the Bombay High Court granted him bail on October 28, 2021.

It may be recalled that while opposing bail to Khan, the NCB had relied heavily on WhatsApp chats to claim his involvement in "international drug trafficking" and to invoke stringent charges of conspiracy.

The NCB had also cited alleged voluntary disclosures by Khan and his friend Arbaaz Merchant to allege that the six grams of 'charas' seized from Merchant were meant for their "consumption and for enjoyment." The court had rejected Khan's bail plea prima facie citing "conscious possession."

Over seven months since, the NCB has cited the following reasons to drop charges against Khan. As for Merchant, the NCB has dropped stringent the section pertaining to conspiracy.

1. Drugs Were Not For Aryan- Voluntary Statement

NCB's Mumbai team had initially claimed that Arbaaz Merchant had admitted to consuming charas with Aryan Khan, adding that they were going inside Cordellia Cruise "for a blast." This was also reflected in the duo's initial voluntary statements.

However, after analysing all their 'voluntary statements' recorded under section 67 of the NDPS Act, the SIT says that neither Merchant nor Khan claimed that the six grams of drugs were meant for Khan, as well. In fact, Khan had warned Merchant against carrying Narcotics on the cruise.

"Merchant in none of his statements, claimed that the 6 Gm Charas recovered from his possession was meant for consumption by Aryan Khan. Aryan Khan also vide his voluntary statements never accepted that the recovered charas was to be consumed by him."

Khan told the SIT that he had refused to give out his phone's password to NCB officials after which they unlocked his phone using his Face ID. When his drug chats were shown to him, Khan said the chats were from his time in Los Angeles, America.

"Though, the mobile phone of Aryan Khan was not formally seized, also none of the chats recovered from his phone connects him to the present case," the NCB said in the charge sheet while reproducing several of Khan's chats.

Earlier, Khan's lawyers had repeatedly argued during his bail hearings that the WhatsApp chats could not be relied on as the phone was not formally seized, however, the court said it was a matter of trial while also citing NCB's argument that the phones were voluntarily surrendered.

3. No recovery of Drugs

Former Zonal Director NCB Sameer Wankhede had searched Khan in his capacity as a gazetted officer but no drugs were found on him. However, the agency tried to make out a case of conscious possession, claiming that the drugs allegedly found on Merchant were meant for both of them. Moreover, no medical tests were conducted to ascertain if the duo had consumed drugs.

Charges of conspiracy under section 29 of the NDPS Act against Khan and others was one of the primary reasons the sessions court denied Khan bail. The court said that since the accused are part of the conspiracy, each of them is liable for the entire quantity of drugs seized and that the case of each accused cannot be segregated from each other and cannot be considered in isolation.

However, in the charge sheet the SIT cited "non-availability of any concrete evidence which could prove role of Aryan Khan or his conspiracy with Arbaaz A Merchant or any other accused in the instant case beyond reasonable doubt," as having surfaced so far.

An internal NCB document that doesn't form part of the charge sheet cites the lapses in the investigation to accuse the first investigating officer of looking at Khan's WhatsApp chats without even formally seizing his mobile phone. "It appears IO was motivated to somehow implicate Aryan Khan in the drug case," the report states.

The report also cautions against the excessive reliance on WhatsApp chats, as they have been frowned upon by the Supreme Court.

"Therefore, our excessive reliance on WhatsApp messages will be severely counterproductive during trial of the case, considering the fact integrity of data extracted from the Aryan's phone is questionable as there is no seizure memo for the Aryan's phone to show how and when his phone was seized," the report states.