Assam : Children Born After Dec 3, 2004 Not To Be Included In NRC If Any Of The Parent Is A 'D' Voter, Declared Foreigner Or Pending Case [Read Order] 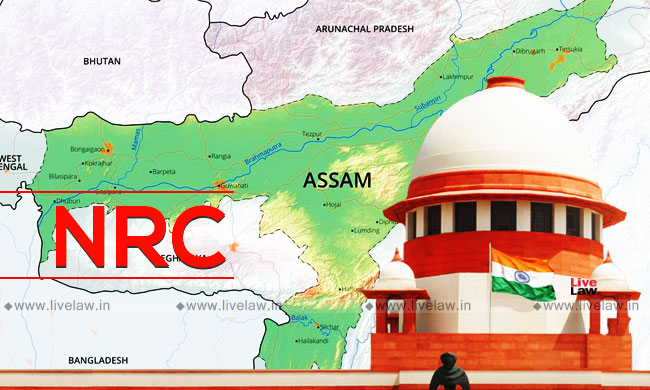 While categorically ruling out reopening or re-verification of the National Register of Citizens for Assam, the Supreme Court on Tuesday held that children born after December 3, 2004 are not eligible to be included in the NRC list, if any of the parent is a DV (Doubtful Voter), DF (Declared Foreigner) or PFT (persons with cases pending at Foreigners Tribunals).The bench of CJI Ranjan Gogoi...

While categorically ruling out reopening or re-verification of the National Register of Citizens for Assam, the Supreme Court on Tuesday held that children born after December 3, 2004 are not eligible to be included in the NRC list, if any of the parent is a DV (Doubtful Voter), DF (Declared Foreigner) or PFT (persons with cases pending at Foreigners Tribunals).

The bench of CJI Ranjan Gogoi and Justice R F Nariman approved the suggestions made by the State NRC Co-ordinator Prateek Hajela regarding the course to be adopted in cases of children of DV, DF and PFT persons.

The suggestions in paragraph 7 of the report submitted to the Court by the State Co-ordinator were :

The Court held that the suggestions (b) and (c) were in consonance with Sections 3(1)(b) and 3(1)(c) of the Citizenship Act 1955 (Act), as per which descendance is the criteria for determining the citizenship of those born after July 1, 1987.

The apex court also rejected the contentions made by intervenors that the suggestion (a) of paragraph 7 is  contrary to Section 3(1)(a) of the Act which states that every person who is born in India after 26, January 1950 but before July 1, 1987 is entitled to Indian citizenship.

Although the Court noted that the validity and ambit of Sections 3 and 6A of the Act is pending before the Constitution Bench, it said that the NRC process carried out on the basis of special procedure as per Assam Accord and Rule 4A cannot be reopened at this juncture.

"The entire NRC exercise having been performed on the aforesaid basis, the same cannot be now ordered to be reopened by initiation of a fresh exercise on certain other parameters that have been suggested on behalf of the intervenors/applicants on the strength of the provisions of Section 3(1)(a) of the Act.", said the Court.

As regards the prayer of the State Coordinator with regard to maintenance of security of the NRC data is concerned, the Court directed that an appropriate regime be enacted on lines similar to the security regime provided for AADHAR data.

"Only thereafter, the list of inclusions and exclusions shall be made available to the State Government, Central Government and Registrar General of India. We further direct that only hard-copies of the supplementary list of inclusions be published at the NRC Seva Centers, Circle Offices and Offices of the District Magistrates of the State. We also direct that the list of exclusions to be published on 31st August, 2019 shall be published only on on-line and shall be family-wise.", ordered the Court.

The top court also held that validity of orders passed by the tribunals under the Illegal Migrants (Determination by Tribunal) Act 1983 should be dealt with as per the ruling of the Gauhati High Court in Anowar Ali v State of Assam.

The Court also clarified that the process will be subject to the decision of the Constitution Bench in respect of Section 3 and 6A.

Last month, the SC had extended the deadline for publication of final NRC list to August 31 from July 31.