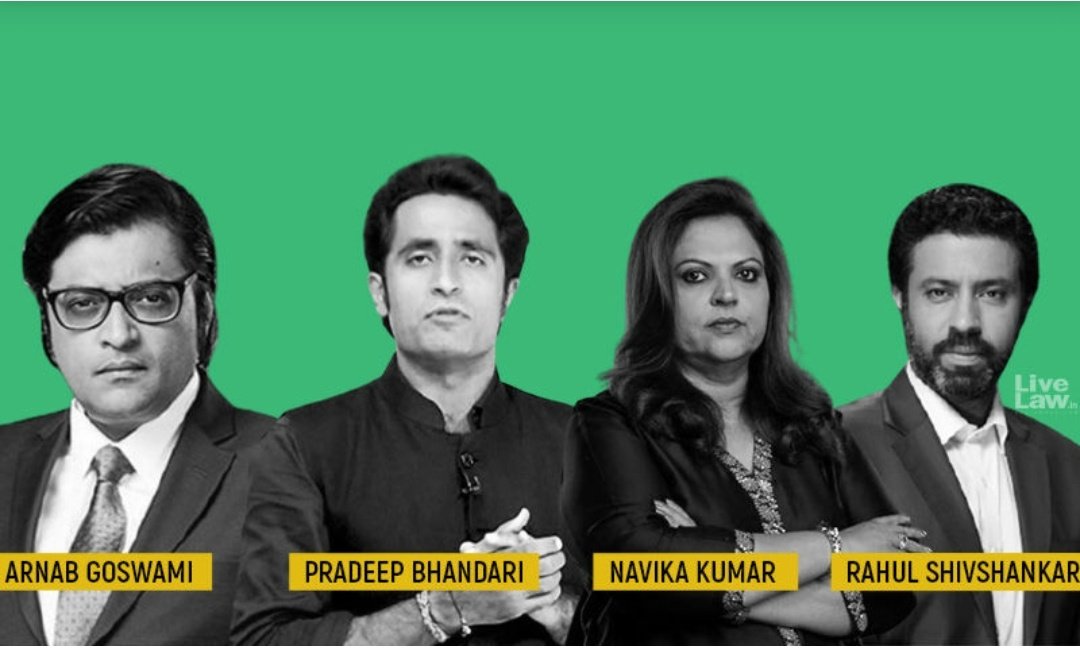 Hearing a plea moved by film production houses against alleged derogatory reporting by Republic TV and Times Now the Delhi High Court today issued notice to all parties, giving them two weeks' time to file their replies. Meanwhile, the Court has directed the TV channels to follow the Programme Code and give "serious consideration" to the resolution of the matter at hand. The bench of...

Hearing a plea moved by film production houses against alleged derogatory reporting by Republic TV and Times Now the Delhi High Court today issued notice to all parties, giving them two weeks' time to file their replies. Meanwhile, the Court has directed the TV channels to follow the Programme Code and give "serious consideration" to the resolution of the matter at hand.

The bench of Justice Rajiv Shakdher further deleted Facebook and Google as necessary parties to the suit, however, it refused to issue any direction as of now, to Youtube, to take down the said alleged derogatory videos.

The matter is listed for further hearing on December 14.

Refusing Adv Malvika Trivedi's plea seeking more time to file Republic TV's reply to the matter, as Arnab Goswami is in judicial custody, Justice Shakdher said that certainly there would be "other people in the organisation to work on the reply".

The Court has also recorded in its order assurances given by the Times Now and Republic TV to follow the Cable TV Act & Rules, and the Programme Code.

Appearing for the production houses, Senior Advocate Rajiv Nayar exhibited the reporting of Arnab Goswami before the court; wherein words such as 'kingpin of Bollywood', 'Pakistani funded', 'nepotists', 'Bollywood's rotting cabal which uses stolen scripts', have been used by Goswami in his reporting. Sr. Adv. Nayyar also read out an excerpt from one of Goswami's reports to make his case of derogatory reporting about the film industry with Goswami stating, "Kangana was right, Sushant was too good for this industry, no perfume can diffuse Bollywood's stench, boycott Bollywood, clean up Bollywood's dirt."

Quoting Arnab's reporting on the Bollywood-Drug nexus, Nayar also read out Arnab's reporting to the Court on the subject, wherein statements such as 'crack open Bollywood's drug nexus, go after the drug nexus, elite of Bollywood has begun to stink like drugs, Deepika Padukone is asking for 'maal', talent managers are providing drugs to these stars' have been made by Goswami.

Pointing out that Arnab suggested in his news reports that Bollywood has links with Pakistan, Sr. Adv Nayyar submitted that while his reporting had started with Sushant Singh Rajput's death case, it had moved to drug peddling and Bollywood's links with Pakistan and ISIS. He further went on to read Arnab's reports under his signature title, 'The Nation Wants to Know Tonight'.

Sr. Adv Nayyar further submitted that Arnab had also made specific allegations in his news reports, against Bollywood actor, Shahrukh Khan, for allegedly doing 'anti-India activities' and went on to ask if any action would be taken against Khan for the same. Nayyar stated that Arnab had further alleged Khan supported Jihad and the 'ideology of Imran Khan' and demanded Khan to issue a public statement denouncing these links with terror supporters.

Nayyar stated that other 'TV channels like Times Now had followed suit after Republic TV started using such reporting for increasing its TRP', and that they had gone 'a step further and produced Whatsapp chats' on their shows.

Times Now, he argued, had even shown the list of questions used by the National Crime Bureau to interrogate Bollywood actress Rhea Chakraborty – this was an interference with investigation, Nayyar stated.

He went on to submit that the 'only channel that did responsible reporting was India Today,' and that most others had crossed the line between fair criticism and derogatory and irresponsible reporting – this was also an infringement of the right to privacy of the plaintiffs, he argued.

He demanded that 'scurrilous tweets' made against Bollywood should be directed by the Court to be deleted by Republic TV and Times Now. Relying on the Vibhor Anand case to substantiate his arguments, Nayyar stated that 'public perception was being influenced by this consistently biased reporting.'

Adv Akhil Sibal further added on to Nayyar's arguments, stating that the TV channels had made 'sweeping abusive statements against Bollywood' in their shows, which were a "complete perversion of license and rights that journalists generally enjoy." He added that, the 'idea was not to attack media as a whole, but to ensure some course correction', and that they were 'not against the 4th estate, we're afraid of fringe becoming the mainstream'.

Calling for court intervention, Adv Akhil Sibal argued that against the court's earlier hopes of self-regulation, no such restraint has been shown by the media.

Stating that media houses were conducting media trials with speculative material being showcased as evidence without any scrutiny of the same by the court, Sibal added that the channels were in "flagrant" violation of the Programme Code which was otherwise binding on them. He prayed for such videos being showcased on Youtube to be directed to be taken down.

The court observed that this showed that these individuals 'are hesitant in claiming damages also,' and that it 'seemed that they were willing to strike but unwilling to continue.'

Sr. Adv. Arvind Nigam argued on behalf of Google and Youtube that they have not been served adequate notice and papers and that, "There's no reason for YouTube to be a party in this when Google is already a party".

He continued that, as the complaining person was not before the court, this amounted to shadow-boxing against a general corporate entity and that if Republic TV and Times Now were directed to remove their videos, YouTube as an intermediary didn't come into the picture at all. Only on the defendant channels' non-compliance would Youtube come into the picture with geo-blocking, he submitted.

Sr. Adv. Sandeep Sethi appearing for Times Now and journalists Navika Kumar and R Shivshankar stated that, out of the 38 plaintiffs before the court in the matter, 35 were companies, and that imputations claimed by the plaintiffs as defamatory are not in any manner made against them and that in no manner has the right to privacy of the film production houses been violated.

Proceeding on his argument of locus standi, Sethi submitted that, 'in matters of defamation and privacy, third parties have no locus to maintain an action and that only persons against whom imputations were made could file such a suit.'

Sethi cited the ONGC case to substantiate his arguments on maintainability of this suit, on which the Court replied that it had understood his preliminary objections.

It then asked the defendants as to what was their answer to the complaints made against such reporting.

Justice Shakder remarked that, "There has to be some toning down, Programme Code needs to be complied with. What should be done when you don't practice self-regulation? What do we do about this?" He continued that the 'undertakings before the court and authorities were not working, and that it was all very demoralising'.

The court further stated that while the TV channels can investigate, they can't run a maligning campaign against anyone. It noted that even though there wasn't even an FIR, the channels had started calling persons as accused. The court then said to the defendant channels that, "Even trained and educated minds get affected by such consistently misreporting."

Citing Princess Diana succumbing to 'media interference', the court observed that, "People are very scared about the 4th estate. Even when the issue of privacy of public figures gets diluted", one "can't drag their personal lives in the public domain."

Sr. Adv Sethi then stated that the complaints filed against the defendants were currently pending before NBSA.

The court warned all the defendant channels that its observations applied to all of them, and that if they didn't follow the Programme Code, the Court would enforce it.

Appearing on behalf of Republic TV, Adv Malvika Trivedi submitted that after the two deaths of Bollywood actor Sushant Singh Rajput and his manager, Disha Salian in mysterious circumstances, Republic TV's relentless coverage had led to a lot of information in the public domain, in response to which the court said that while it wasn't saying that the channel couldn't cover such news, it has to do responsible journalism.

Appearing for TV9 network Advocate Jatinder Kumar Sethi argued that the suit as filed was valued at Rs. 600 only and the High Court had no pecuniary jurisdiction to entertain the suit. It was also pointed out that the suit was not maintainable for non compliance of Order 1 Rule 8 CPC. The court said "I trust you will file your written statement and take these pleas"

Appearing for Facebook, Sr. Adv Kapil Sibal submitted that while it will abide by the court's orders it has no role to play in the case as per the Shreya Singhal judgment.

Court asks Plaintiffs as they would be willing to array certain aggrieved individuals as parties to this suit? Nayar: We will take instructions and come back.