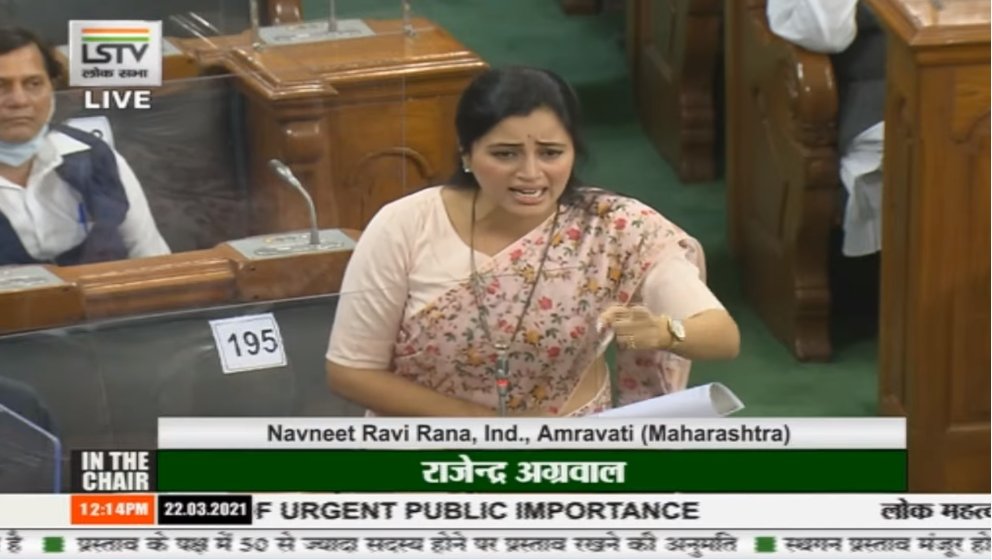 " In our view, it was systematic fraud committed by the respondent no.3 (Rana) with the assistance of her father to obtain the caste certificate Mochi by fabricating the records to enable her to contest the election for member of Parliament in the Constituency reserved for reserved category candidate and other benefits available to such caste under Constitution of India.," the bench said in its order.

The court observed that such acts might deprive genuine candidates of the reserved category of all benefits he/she may be entitled to under the Constitution of India.

It further commented on the CSC's abysmal conduct, which accepted Rana's claims despite several complaints against her, thus putting its "imprimatur," or approval on her fraud.

"The principle of natural justice was not adhered to and rather was thrown to the winds by the Scrutiny Committee. We cannot take our eyes off the illegality staring at us and committed at the hands of Scrutiny Committee," the bench observed about Committee's conduct during the proceedings.

As a consequence of the HC's order, Rana, a first-time parliamentarian, may lose her seat as it's reserved for a candidate from the schedule caste.

"It is declared that all consequences in law, which mayoccur on cancellation and confiscation of the fraudulentlyobtained caste certificate by the respondent no.3 would follow", the Court said in the judgment.

Rana, an independent candidate from Maharashtra's Amravati constituency, was elected to the Lok Sabha in 2019 by defeating then sitting Shiv Sena MP Anandrao Adsul with backing from the NCP. Her husband, Ravi Rana, is an MLA. However, Rana was said to be drifting towards the BJP since the 2019 election.

The bench passed its order on petitions filed by Adsul and a social worker from Amravati, Raju Mankar, challenging the Caste Scrutiny Committee's (CSC) order validating Rana's Cate certificate. They also sought to set aside the original Caste certificate issued to Rana by the Deputy collector on August 30, 2013.

Senior advocate CM Korde, representing the petitioner, submitted that Rana had asked her father to create records to obtain the caste validity certificate to contest the parliamentary election in 2014.

In 2014, following complaints by Mankar and one Jayant Vanjari, the CSC's Vigilance Cell submitted a report that the school leaving certificate submitted by Rana, mentioning "Mochi" caste was forged, the bench noted in its order. The Scrutiny Committee subsequently issued a show-cause notice to her.

However, Rana complained against the Vigilance Officer and submitted additional documents to support her claims, and CSC changed the officer. In a new report to the SCS in April, the Vigilance Cell opined that the entry "Mochi" in Rana's school leaving certificate was added in 2013.

But CSC dismissed Mankar's complaint holding that a validity certificate once issued cannot be withdrawn and /or cancelled. In 2014, Mankar filed a civil suit in the Bombay High Court that eventually set aside the caste validity certificate issued to Rana and directed the CSC to decide the matter afresh.

In its order dated November 3, 2017, the CSC again accepted Rana's caste claim, primarily on two documents i.e. a bonafide certificate issued by Khalsa College of Arts, Science and Commerce in which the caste was mentioned as "Sikh Chamar" and a Rent Agreement which corroborates proof of residence appearing under the Khalsa College Register, which also records her forefather's address.

Korde claimed these documents were fabricated, considering the ink's colour difference at different places. He pointed out that Khalsa College's authorities had refused inspection to the vigilance cell officer and only gave photocopies of their register.

As for the rent agreement, they argued, it was unthinkable that a document from 1932 would mention terms like "compensation" and "royalty" as those words were used only after the Bombay Rents Hotel and Lodging House Rates Control Act, 1947.

Senior Counsel Prasad K Dhakephalkar, for Rana, argued that the CSC did not rely upon the host of documents to which the petitioners had raised objections. He submitted that CSC only relied upon two documents Tenancy document and (ii) the Khalsa College document, which the petitioners didn't challenge before the Scrutiny Committee. Therefore, the court while exercising writ jurisdiction under Article 226 of the Constitution of India cannot take judicial notice of these additional documents.

Dhakephalkar further argued that the Vigilance Cell reports against his client could not be used as evidence.

Regarding the Khalsa College document, the bench observed that the Vice Principal produced the original copy of the register before the CSC at the complainant's request. However, they were neither allowed to inspect the record nor cross-question the vice principal.

"We also note with dismay that inspection of original register was not given to the complainant..

"What aghasts us is an eerie silence and failure on the part of Scrutiny Committee to give finding(s) on the answer so given by the said representative… Abdicating its responsibility and duty, the Scrutiny Committee chose to remain discreet."

Thus, the bench rejected Dhakephalkar's arguments that it could not scrutinize the two additional documents, observing that "principle of natural justice were thrown to the winds."

The bench ruled that the CSC failed to perform its mandatory functions under Section 7 of the Caste Certificate Act, by which the Committee has features of judicial functioning and therefore requires a high degree of sensible approach with all circumspection.

"We are of the firm view that Scrutiny Committee did its job rather sloppily and shirked the obligations imposed on it by the provisions of the Act, if we may say so," the bench said.

In the 1932 document, the court observed that Rana's great grand father's caste is mentioned as 'Sikh Chamar,' despite no requirement in law to state the caste of a tenant in any rent agreement. And the CSC accepted the document because the complainant didn't object to it.

"Mentioning of a caste in any private document such as alleged rent agreement cannot be conclusive to prove the caste of any applicant," the bench noted, adding that the document didn't even have the complete address.

Moreover, the court noted contradictions in Rana's documents by which she claimed to be 'Sikh Chamar' and 'Ravidasiya Mochi'. "The respondent no.3(Rana) has not given up one of the two castes," the bench observed. In our view, 'Chamar' and 'Mochi' are not synonymous and are different identities.

"A wrong caste validity certificate granted in favour of the party who does not belong to that caste may deprive a genuine and deserving person belonging to such reserve category of the caste and of the benefits and all the benefits prescribed in the Constitution of India. In our view, the impugned order passed by the respondent no.2 committee accepting both these fabricated and fraudulent documents is a clear case of inherent improbability," the bench observed.

Lastly, the bench reminded the Scrutiny Committee that it should be more "cautious" and "careful" before validating the caste certificates.