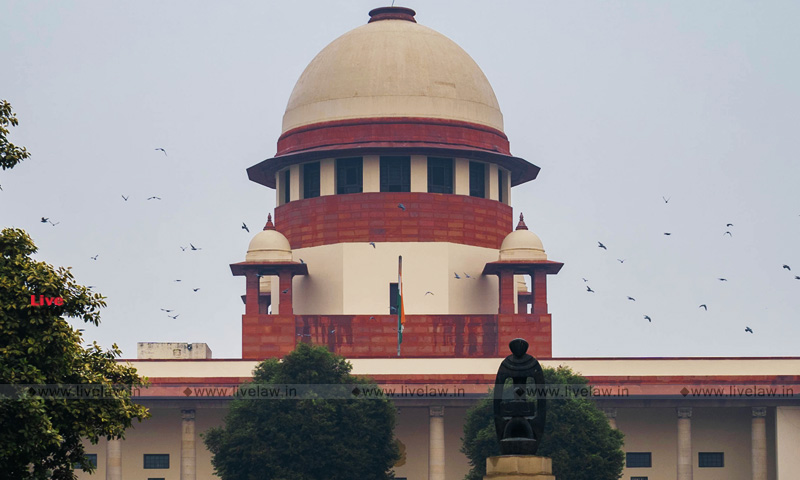 x
Direct recruitment is an exclusive quota for practising advocates, the SC held.

In a significant judgment, the Supreme Court has held that civil judges are not eligible to seek direct recruitment to post of District Judges in bar quota. Eligibility under Article 233(2) of the Constitution requires 7 years of continuous practice. "Only practising candidates can avail the quota. It is exclusively for them", Justice Arun Mishra, dictating the order, said."Article 233(2)...

In a significant judgment, the Supreme Court has held that civil judges are not eligible to seek direct recruitment to post of District Judges in bar quota.

Eligibility under Article 233(2) of the Constitution requires 7 years of continuous practice. "Only practising candidates can avail the quota. It is exclusively for them", Justice Arun Mishra, dictating the order, said.

"Article 233(2) nowhere provides eligibility of in-­service candidates for consideration as a District Judge concerning a post requiring 7 years' practice as an advocate or a pleader. Requirement of 7 years' experience for advocate or pleader is qualified with a rider that he should not be in the service of the Union or the State", the Court said in the judgment.

The Court also said that the practice referred in Article 233(2) is "continuous practice" as not only on the cut-off date for the selection but also on the date of appointment.

"The requirement of 7 years of minimum experience has to be considered as the practising advocate as on the cut­off date, the phrase used is a continuous state of affair from the past. The context 'has been in practice' in which it has been used, it is apparent that the provisions refers to a person who has been an advocate or pleader not only on the cut­off date but continues to be so at the time of appointment", the Court observed.

Conclusions of the Court.

The bench answered the reference as follows :

"(i) The members in the judicial service of the State can be appointed as District Judges by way of promotion or limited competitive examination.

(ii) The Governor of a State is the authority for the purpose of appointment, promotion, posting and transfer, the eligibility is governed by the Rules framed under Articles 234 and 235.

(iii) Under Article 232(2), an Advocate or a pleader with 7 years of practice can be appointed as District Judge by way of direct recruitment in case he is not already in the judicial service of the Union or a State.

(iv) For the purpose of Article 233(2), an Advocate has to be continuing in practice for not less than 7 years as on the cut­off date and at the time of appointment as District Judge. Members of judicial service having 7 years' experience of practice before they have joined the service or having combined experience of 7 years as lawyer and member of judiciary, are not eligible to apply for direct recruitment as a District Judge.

v) The rules framed by the High Court prohibiting judicial service officers from staking claim to the post of District Judge against the posts reserved for Advocates by way of direct recruitment, cannot be said to be ultra vires and are in conformity with Articles 14, 16 and 233 of the Constitution of India.

vi) The decision in Vijay Kumar Mishra (supra) providing eligibility, of judicial officer to compete as against the post of District Judge by way of direct recruitment, cannot be said to be laying down the law correctly. The same is hereby overruled".

Appointments made on the basis of interim orders nullified

The Court has also held that those in-service judicial officers who got appointment as District Judges on the basis of interim orders passed by the SC should be reverted back to the original posts.

"In case their right in channel for promotion had already been ripened, and their juniors have been promoted, the High Court has to consider their promotion in accordance with prevailing rules. However, they cannot claim any right on the basis of such an appointment obtained under interim order, which was subject to the outcome of the writ petition and they have to be reverted", the Court said in this regard.

The issue whether Civil Judges can seek direct recruitment to the post of District Judges against the quota reserved for candidates from Bar was referred to this bench in the case Dheeraj Mor v Hon'ble High Court of Delhi.

Observing that the case involved a substantial question of law regarding interpretation of Article 233 of the Constitution, a division bench comprising Justices Kurian Joseph and Mohan M Shantanagoudar had made the reference on January 23, 2018.

(i) in case a candidate has completed seven years of practice as an advocate, he/she shall be an eligible candidate despite the fact that on the date of the application/appointment, he/she is in the service of Union or State;

According to Article 233(2) of the Constitution of India, a person not already in the service of the Union or of a State becomes eligible for appointment as a District Judge only if he has been an advocate or a pleader for at least seven years.  The issue in the case was whether members of subordinate judiciary, who have seven years of practice as advocate, are eligible to seek appointment as District Judges through direct recruitment.

"While you are in service, you have to follow promotion quota", Justice Arun Mishra had remarked during the hearing of the case.

"They have carved out a separate category for bar members. The purpose was that the bar has better representatives than those appointed directly without any experience. The bar is the fountain source of the judiciary. If you don't have experience at the bar, you cannot know all the streams of the law", Justice Mishra had orally remarked.

On May 10, 2019, a Division Bench comprising Justices Arun Mishra and Navin Sinha had held restrained the recruitment of in-service candidates to District Judge posts through bar quote.

"Nowhere it is provided that such in-service incumbents can stake their claim as against posts which are reserved for direct recruitment for the Bar", that bench had observed.

In 2018, a division bench of Justice Kurian Joseph and Justice S.K. Kaul had permitted the interim appointment of in-service judges as District Judges through direct recruitment method.

In 2016, a division bench of Justices J Chelameswar and Abhay Manohar Sapre had held that an in-service judge need not resign from post to participate in the selection process of District Judge through direct recruitment method. However, the judgment was only on the point of eligibility to participate in the selection process and did not express anything on the eligibility for appointment.