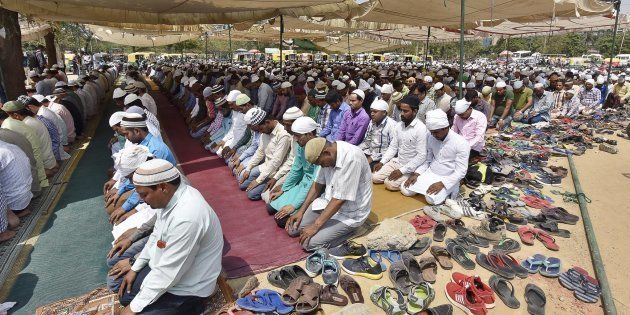 The Chief Justice of India NV Ramana on Monday agreed to give urgent listing to a petition seeking contempt action against the officers of the State of Haryana for their alleged inaction in preventing the disruption of Namaz offerings by the Muslim community in open designated places in Gurugram.Senior Advocate Indira Jaising mentioned the petition before the CJI."This is not only based...

The Chief Justice of India NV Ramana on Monday agreed to give urgent listing to a petition seeking contempt action against the officers of the State of Haryana for their alleged inaction in preventing the disruption of Namaz offerings by the Muslim community in open designated places in Gurugram.

Senior Advocate Indira Jaising mentioned the petition before the CJI.

"This is not only based on newspaper reports, we have ourselves filed complaints. We are not asking for any enforcement of FIR. This court has laid down preventive measures", Jaising submitted.

"I'll look into it and post before appropriate bench immediately", CJI said.

The petition has sought action against the Chief Secretary and the Director-General of Police of State of Haryana, Sanjeev Kaushal IAS and PK Agrawak IPS respectively.

The contempt action is being sought on the argument that the Haryana authorities have failed to comply with the directions issued by the Supreme Court in Tehseen S. Poonawalla Vs. Union of India & Ors. In the said case, the Supreme Court had issued a slew of directions in 2018 to control and prevent the increasing number of hate crimes, including mob violence and lynching.

The petition filed by former Rajya Sabha MP Mohammad Adeeb has submitted that in the few recent months, there has been a constant rise in incidents revolving around the Friday prayers offered by Muslims at the behest of certain "identifiable hooligans", who portray themselves falsely in the name of religion and seek to create an atmosphere of hatred and prejudice against one community across the city.

The petition has argued that there is serious inaction of the State machinery in taking effective measures for prevention of these incidents in Gurugram.

"This nefarious design being given effect to by propagation and dissemination of hateful content through social media platforms spreading false narratives, terming the performance of Friday Namaz, which is being done in the open due to compulsion and the same is permitted by the appropriate authorities in the circumstances as being illegal and in a manner of some sort of encroachment," the plea has stated.

The petitioner has argued that as early as in April 2021, the local residents and the persons coming to perform Friday prayers have been facing such malicious and hateful campaigns at the sites of such prayers

According to the petitioner, complaints have been filed with Commissioner of Police, Gurugram. But despite the complaints, there remained severe inaction at the hands of the contemnors and the incidents grew both in intensity and number every Friday at various locations in Gurugram.

The petitioner has pointed out that with no strict action being taken against the unruly elements, on 3rd December, the incidents escalated further and a larger group was present on various sites of Namaz chanting communally divisive and hateful slogans.

"While a considerable number of police forces were present, despite the same videos emerged clearly showing such persons as having no fear of law. The police reportedly detained some persons from the mob, but the same were subsequently let off the same day," the plea has stated.

"The continuous inaction, apathy of the State machinery and failure of the local law enforcement agencies and administration to prevent such incidents or to find a solution to the crises before it spirals into a monstrosity, is precisely what had been indicated by this Hon'ble Court in Tehseen S. Poonawalla and is thus clearly a contempt of this Hon'ble Court's directions," the plea has argued.

The plea has been filed through Advocate Fuzail Ahmad Ayyubi and drawn by Advocates Ashima Mandla, Ibad Mushtaq and Akanksha Rai.