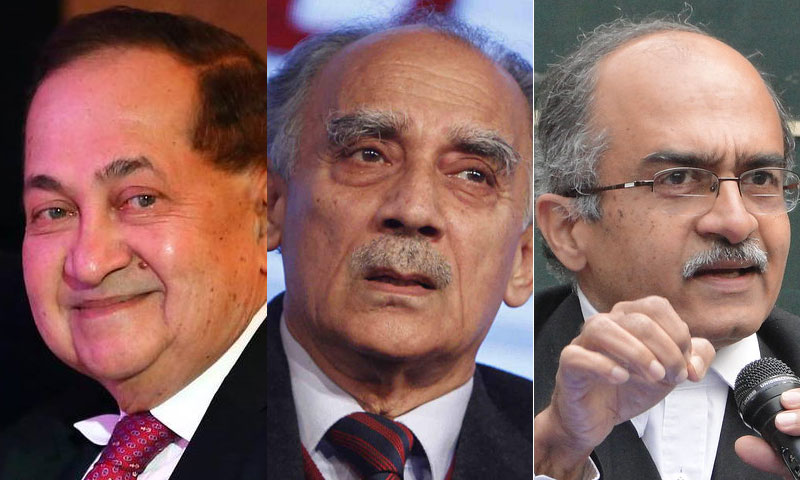 The Supreme Court on Thursday allowed the petitioners to withdraw a writ petition challenging the constitutionality of the offence of 'scandalising the court' under Section 2(c)(i) of the Contempt of Courts Act, 1971. The Court allowed the petitioners to approach an appropriate forum sans liberty to move the Top Court again.A bench of Justices Arun Mishra, BR Gavai & Krishna Murari took...

A bench of Justices Arun Mishra, BR Gavai & Krishna Murari took up the matter for hearing. Senior Advocate Rajeev Dhavan appeared for the petitioners and pointed out that he would like to withdraw the plea.

"At present many cases are before your lordships, so I don't want this matter to get entangled with the others, or vice versa. This is not the appropriate stage to take this up. I seek liberty to file it at a later stage" said Dhavan

At this juncture, Justice Arun Mishra stated that they are "allowing withdrawal, but not permitting the matter to be filed before us again".

Dhavan sought the indulgence of the Court to file the instant plea before High Court.

Dhavan: "It's an important issue, hence the question must be kept open and decided at the appropriate time".

Dhavan also said, "maybe I will come back with this in 2 months"

The petition filed by N Ram (former Editor and Managing Director of 'The Hindu), Advocate Prashant Bhushan and Arun Shourie (former Union Minister) challenged the provision as vague, arbitrary, subjective and leading to violation of fundamental right to free speech.

The petition was initially listed before a bench comprising Justices D Y Chandrachud and K M Joseph on August 10. However, the case was removed from that bench. The SC registry stated that the case should have been listed before the bench led by Justice Arun Mishra as it was already considering the contempt cases against Bhushan.

The petitioners argued that the provision :

The petitioners state that the offence is "rooted in Colonial assumptions", which have no place in a democracy.

The provision is also challenged as violative of Article 14 on the ground of "manifest arbitrariness", on the basis of principles laid down by Supreme Court in Shayara Bano (Triple Talaq case) and Navtej Johar (decriminalisation of homosexuality).

In 2013, the United Kingdom, had abolished the offence of scandalising the judiciary as form of contempt of court based on UK Law Commission's recommendation that the law was vague and not compatible with freedom of speech.

Notably, the instant plea was filed following the contempt proceedings taken against Bhushan over two of his tweets about the Chief Justice of India and the Supreme Court.

On August 5, the Top Court reserved orders on the contempt case.