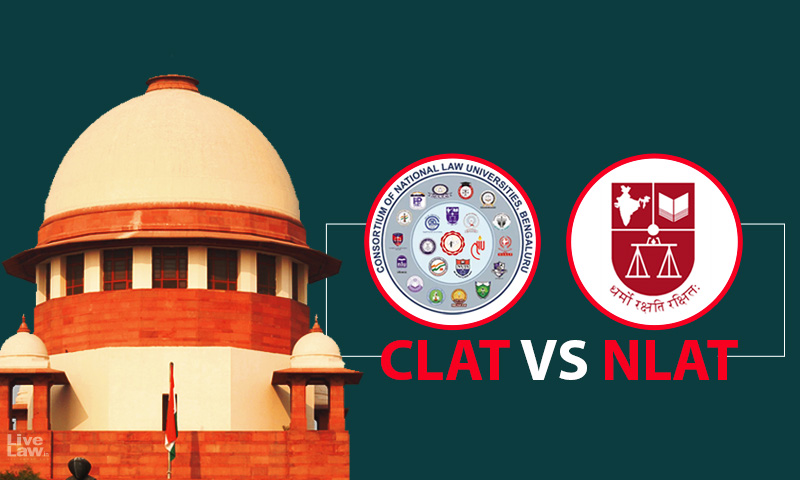 A Supreme Court Bench headed by Justice Ashok Bhushan has allowed the National Law School of India to conduct the Admission Test-NLAT2020 as per the schedule Tomorrow.

However the Bench has restrained the Administration from declaring the results and making Admissions.

"In the meantime, the examination for admission in pursuance of Notification dated 04.09.2020 may take place but neither the result shall be declared nor any admission be made consequent thereto. We make it clear that conducting of examination shall be subject to the outcome of the writ petition".

The Bench was hearing a petition filed by Former Vice Chancellor of NLSIU, Prof. (Dr.) R. Venkata Rao and an aggrieved parent of a CLAT aspirant challenging the sudden withdrawal of NLSIU Bangalore from CLAT 2020, to hold a separate entrance test namely NLAT 2020.

The Bench has asked the parties to file the counter in Three days . The Court has posted the matter on September 16.

Senior Advocate Nidhesh Gupta appeared for the petitioner and stated that the decision of NLSIU to have a separate entrance is violative of the by-laws. "The examination standard is to be decided by the Academic council and Executive Council cannot repeal or amend," he said.

While taking the bench through the Memorandum of Association of the consortium of National Law Universities which mandates a Common Law Entrance for NLU's, Gupta said that any NLU formally admitted is required to organise the Common Admission Test for all courses for NLU's across the country. He further argued that that the Consortium took the decision to postpone CLAT due to the ongoing situations in West Bengal & Bihar and the NLSIU was party to the said decision.

Gupta: "They say they need to conduct a separate exam as not doing so will lead to a zero-year and that they have a trimester system. Also, when taking exam at home, bound to be cheating and malpractices"

Senior Advocate Gopal Sankaranarayan who was appearing for a supplementing petitioner, submitted that the NLSIU had subverted the by-laws and that it was a decision of the SC which led to conduction of a Common law entrance test.

At this juncture, Justice Ashok Bhushan remarked that the issue at hand was important and required consideration, asking Senior Advocate Arvind Datar appearing for NLSIU Bangalore to file a counter affidavit.

Senior Advocate Arvind Datar submitted that the examination was scheduled to be held tomorrow and urged the court to allow him to make submissions so that the exam could be successfully conducted.

Datar: "Exam is scheduled tomorrow, My lords may kindly hear me. Only law school having Trimester system. Repeatedly appealing to Consortium not to delay exam beyond September."

He further added that if admissions were not completed within time by September then the institute would have lost 16 crores by not admitting the 120 UG students and other PG students. "This is only 1 year, we will go back to CLAT next year," he said.

Justice Bhushan remarked that the institute will be allowed to conduct the exam but the result and consequent admissions thereto shall not take place.

"You have already decided to hold the exams. Students are ready. Hold the exam, but no results can be announced till the pendency of the proceedings", the Court observed.

In this backdrop, the court observed that the result of the examinations shall be subject to the court's final decision in the matter.

The Plea filed though Advocates Sughosh Subramyam and Vipin Nair states that such "unilateral decision" of NLSIU to hold a separate examination has thrown the aspirants of CLAT 2020 into a frenzy and is a serious violation of their fundamental rights, including the right against arbitrary actions of the State secured under Article 14 and the right to education and other concomitant rights under Article 21.

Notably, NLSIU has released the technical requirements for taking NLAT 2020.