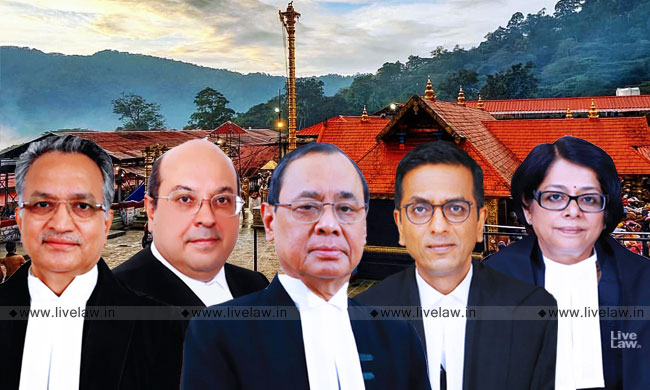 The Supreme Court on Thursday, by 3 :2 majority, decided to keep the review petitions in Sabarimala matter pending until a larger bench determines questions related to essential religious practices.The majority of CJI Ranjan Gogoi, Justice Khanwilkar and Indu Malhotra expressed that the issue whether Court can interfere in essential practises of religion needed examination by larger...

The Supreme Court on Thursday, by 3 :2 majority, decided to keep the review petitions in Sabarimala matter pending until a larger bench determines questions related to essential religious practices.

The majority of CJI Ranjan Gogoi, Justice Khanwilkar and Indu Malhotra expressed that the issue whether Court can interfere in essential practises of religion needed examination by larger bench. Justices Chandrachud and Nariman dissented.

The order is silent on any stay of the September 28, 2018 judgment which allowed entry of women of all age groups to the hilltop shrine in Pathanamthitta district in Kerala.

The majority judgment observed that the issue relating to restriction of women in places of worship is not limited to Sabarimala alone and the some arises in respect of cases concerning entry of Muslim women in a Durgah/Mosque as also in relation to Parsi women married to a non-Parsi into the holy fire place of an Agyari. There is also a case pending regarding the legality of practice of Female Genital Mutilation in Dawoodi Bohra community.

A decision by a larger bench would put at rest the issues relating to rights under Articles 25 and 26.

"It is essential to adhere to judicial discipline and propriety when more than one petition is pending on the same, similar or overlapping issues in the same court for which all cases must proceed together. Indubitably, decision by a larger bench will also pave way to instil public confidence and effectuate the principle underlying Article 145(3) of the Constitution -which predicates that cases involving a substantial question of law as to the interpretation of the Constitution should be heard by a bench of minimum five judges of this Court."

The majority judgment also observed that there was an apparent conflict between the judgments in Shirur Mutt case and the Dargah Committee Ajmer case. While the former held that the question regarding what are essential religious practices should be determined by the denomination itself, the latter decision held that Courts can exclude secular and superstitious beliefs from essential religious practices.

The Sabarimala review has been tagged along with those matters.

Justice Nariman, who read out the dissenting opinion, said that the issues of Parsi women and Muslim women were not before the Sabarimala bench and hence the matter could not be tagged with them. The original judgment was based on a bona fide PIL which raised the issue of women being denied entry on the basis of their physiological features, said Justice Nariman.

"Let every person remember that the 'holy book' is the Constitution of India, and it is with this book in hand that the citizens of India march together as a nation, so that they may move forward in all spheres of human endeavour to achieve the great goals set out by this "Magna Carta" or Great Charter of India", said Justice Nariman.

The following are the issues that have been referred to larger bench :

The majority added that that the larger bench may consider all the issues, including the question whether the Kerala Hindu Places of Worship (Authorization to Entry) Rules 1956, govern the Sabarimala temple at all. The larger bench also may consider whether to grant fresh opportunity to all interested parties for the consideration of this issue.

In the light of these issues, the majority judgment ordered :

"The subject review petitions as well as the writ petitions may, accordingly, remain pending until determination of the questions indicated above by a Larger Bench as may be  constituted by the Hon'ble the Chief Justice of India".

The judgment of CJI Gogoi said :

"In a legal framework where the courts do not have any epistolary jurisdiction and issues pertaining to religion including religious practices are decided in exercise of jurisdiction under Section 9 of the Civil Procedure Code or Article 226/32 of the Constitution the courts should tread cautiously. This is time honoured principle and practice".

The Constitution Bench of the Supreme Court had reserved orders on review petitions in Sabarimala case after giving a full day hearing to the petitioners on February 6.

The Constitution Bench of CJI Gogoi, and Justices Khanwilkar, Nariman, Chandrachud and Indu Malhotra heard the arguments in a bunch of petition filed by the Travancore Devaswom Board, Pandalam Royal Family, and groups of devotees against the September 28, 2018 judgment, which declared right of women of all age groups to enter the temple.

They essentially argued that the practice at temple was based on the celibate character of the deity.