[Violation Of Fundamental Rights Of Victims] Can The Court Just Fold Its Hands & Sit Back If The Legislature Is Inactive? Asks SC 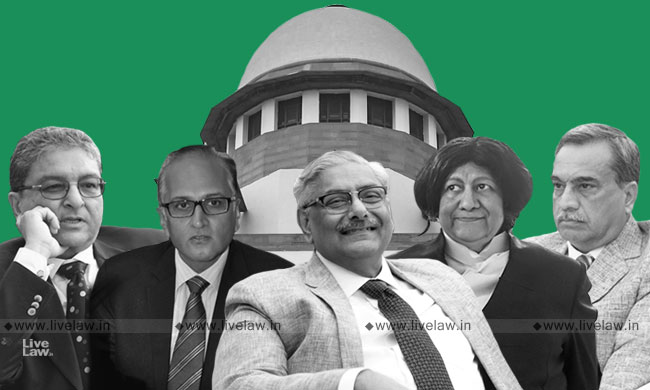 The Constitution Bench of the Supreme Court of India comprising of Justices Arun Mishra, Vineet Saran, Indira Banerjee, M.R. Shah and S. Ravindra Bhat heard arguments in the case of Kaushal Kishore v. State of Uttar Pradesh. The case involves the question of whether persons holding public offices have greater restrictions on their right to freedom of speech and expression under Article 19(1)(a) of the Constitution of India.

Arguments commenced with Justice Mishra seeking an answer to the following:

"To what extent can we hold the minister responsible for certain utterances as by virtue they belong to very special classes of society? What can be the remedy in these cases?"

Attorney-General K.K. Venugopal sought to answer the aforementioned question by alluding to the realm of private and public law. He stated that when a person holding public office speaks on policy issues, it ushers in the aspect of collective responsibility and thus, the State is involved. However, when such person comments on aspects of private law, then the remedy does not exist against the State, but against the Minister herself or himself as "it is not a part of the functions of the Minister to make derogatory statements".
The Attorney-General also cited cases such as Kharak Singh v. State of U.P. and S. Rangarajan v. P. Jagjivan Ram to drive home the point that freedom of speech and expression cannot be held ransom by a group of intolerant people. Only grounds enumerated under Article 19(2) of the Constitution of India can be utilized as restrictions on Article 19(1)(a).
ENFORCEMENT OF ARTICLE 21
In order to elucidate this point, he stated that Article 21 of the Constitution of India states that a restriction can be made by "a procedure established by law". Justice Mishra countered this by stating that due process of law did not necessarily mean that there had to be an enacted law. This commenced a debate on whether the rights enumerated in scores of judgements under Article 21 could only be enforced if there was a statutory law or if the Courts had the right to enforce the same.
Justice Mishra stated that rights were not dependent on statutory law alone; it's an independent right. "Due process of law" was just an additional facet and it does not mean that there has to be an enacted law. He also raised the question of "right to privacy" of the victim, to which the AG responded that this right had to be claimed. Justice Bhat interjected by stating that the Puttaswamy case had declared the existence of privacy as an intrinsic part of Article 21. He also put forward the question of what the State could do if they infringed the victim's right.
The AG, per contra, insisted on the existence of a statutory law by bringing forward the various rights which had been given shape under Article 21 (right to privacy, right to legal aid, right to fair trial, right to sleep etc.). He stated that it was impossible to enforce these rights without the Parliament enacting laws on the same and that the Court could not abrogate the concept of separation of powers by impinging on the realm of the Parliament. They could only issue guidelines which was done in the case of Vishakha; guidelines issued by the Court were only a last resort measure.
Justices Mishra, Bhat and Shah stated that they were not creating a right, but only giving it regulatory shape. Two pertinent questions were reiterated by the Bench throughout the course of arguments:

1. Whether these enumerated rights could be violated by a person holding public office?

2. Can there be guidelines to fill the vacuum till the Parliament chooses to enact a law?

As the duty of the Supreme Court is to protect Fundamental Rights, the question of whether the Court could issue measures when there existed a vacuum or a lacuna arose. Justices Mishra and Shah asked the AG about what was to be done in the absence of an enforcement machinery. Justice Bhat cited an example of how the Courts had to step in during critical issues such as HIV and blood transfusion. However, the AG countered the same by stating that these instances were only exceptions.
CO-EXISTENCE OF
ARTICLE 21 AND ARTICLE 19(1)
The Counsel for the Petitioners, Mr. Kaleeswaram Raj, commenced the argument by stating that the Courts did not have the mechanism that the legislature otherwise has. When it is a process of adjudication, the Court can only say if A or B is right. However, in matters of legislation, all aspects and conditions surrounding the formation of a statute must be examined and only the legislature is in the position to do so.
Justice Banerjee however asked,

"Will the Court just fold its hands and sit back if the legislature is inactive, and watch the infringement of Fundamental Rights?"

Justices Mishra and Shah however brought up the issue of how Articles 19(1) and 21 had to be read harmoniously. There was a need for their co-existence as killing one would entail the extinguishment of the other.

"Why can't we be a respectable democracy? Why can't we respect each other's sides? When you are holding an office, shouldn't you respect others? Let us come to the fundamental duties. Can we make such reckless statements and destroy the very harmony of this country?" , asked Justice Mishra.

Justice Bhat stated that such statements jeopardies the fairness of an investigation, which was an intrinsic part of Article 21.
The Bench concluded by directing the Counsels from both the sides to research extensively on the matter and to revert back with case laws pertaining to the responsibilities of a person holding public office; whether he was liable for the statements and to what extent.
The matter is now listed on 19.11.2019.
Next Story
Similar Posts
+ View more
Webinars
+ More
Law Firms
+ More
Latest News
+ More
लाइव लॉ हिंदी
+ More
International
+ More
Environment
+ More