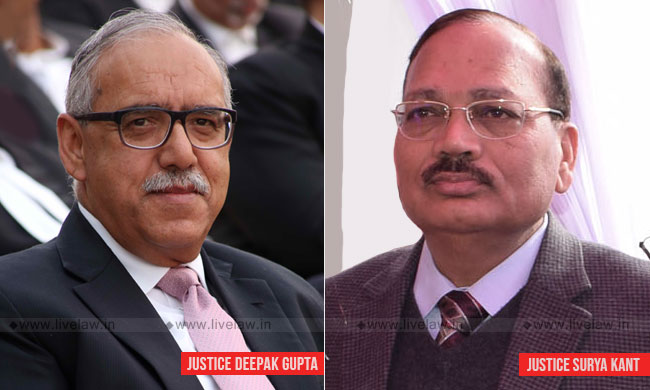 In a notable judgment in service law, the Supreme Court has held that a candidate will not be estopped from challenging a selection process on the ground of having participated in it when there is allegation of "misconstruction of statutory rules and discriminating consequences arising therefrom".This was held by a bench comprising Justices Deepak Gupta and Surya Kant while deciding a...

In a notable judgment in service law, the Supreme Court has held that a candidate will not be estopped from challenging a selection process on the ground of having participated in it when there is allegation of "misconstruction of statutory rules and discriminating consequences arising therefrom".

This was held by a bench comprising Justices Deepak Gupta and Surya Kant while deciding a preliminary objection against the maintainability of an appeal.

The appeal was concerned with the selection process of General Medical Officer in the State of Bihar. The appellant, Dr. Major Meeta Sahai, was aggrieved with the non-consideration of her experience in Army Hospital for reckoning 'weightage' in the selection process.  The Government took the stand that only the work experience in Government Hospitals in Bihar will count for 'weightage'.

This was challenged by the appellant unsuccessfully in Patna High Court and the matter ultimately reached the Supreme Court.

In the Supreme Court, the respondents raised a preliminary objection against the maintainability of appeal on the ground of estoppel. It was contended that the appellant could not challenge the results after taking part in the selection process.

The bench agreed with this principle of estoppel, which was expounded in Manish Kumar Sahi v State of Bihar.

"The underlying objective of this principle is to prevent candidates from trying another shot at consideration, and to avoid an impasse wherein every disgruntled candidate, having failed the selection, challenges it in the hope of getting a second chance", observed the bench.

The bench however held that the candidate's participation in the selection process is only the acceptance of the process held in accordance with the prescribed rules. The principle of estoppel will not apply when there is a misinterpretation of the rules and candidate suffers discrimination due to that.

"However, we must differentiate from this principle insofar as the candidate by agreeing to participate in the selection process only accepts the prescribed procedure and not the illegality in it. In a situation where a candidate alleges misconstruction of statutory rules and discriminating consequences arising therefrom, the same cannot be condoned merely because a candidate has partaken in it. The constitutional scheme is sacrosanct and its violation in any manner is impermissible".

"In fact, a candidate may not have locus to assail the incurable illegality or derogation of the provisions of the Constitution, unless he/she participates in the selection process".

The Court noted that the case related to the interpretation of "work experience" in the notification, and whether service in Army Hospitals counted for weightage.

"Since interpretation of a statute or rule is the exclusive domain of Courts, and given the scope of judicial review in delineating such criteria, the appellant's challenge cannot be turned down at the threshold", the judgment authored by Justice Surya Kant observed.

The Court ultimately allowed the appeal, holding that the exclusion of service in Army Hospitals was irrational. The discrimination between hospitals under State Government and Central Government or its instrumentalities amounted to unreasonable classification.

"It is hence irrational to urge that the work experience in any such hospital is different from that in a Government of Bihar hospital. Hence, it would be Constitutionally unjust to allow differentiation between the experience gained by doctors at these hospitals established by Panchayats or Municipalities or by the Central Government and its instrumentalities in the territory of Bihar vis­à­vis those run by the Bihar Government. Any attempt to discriminate between hospitals run by the State Government and the Central Government or Municipalities/Panchayati Raj Institutions is bound to hit the very ethos of our Constitutional governance setup"., it held.

"Interpreting 'Government hospitals' to include only a small class of persons who have worked under the Government of Bihar, is thus clearly erroneous and anti­-merit", it added.