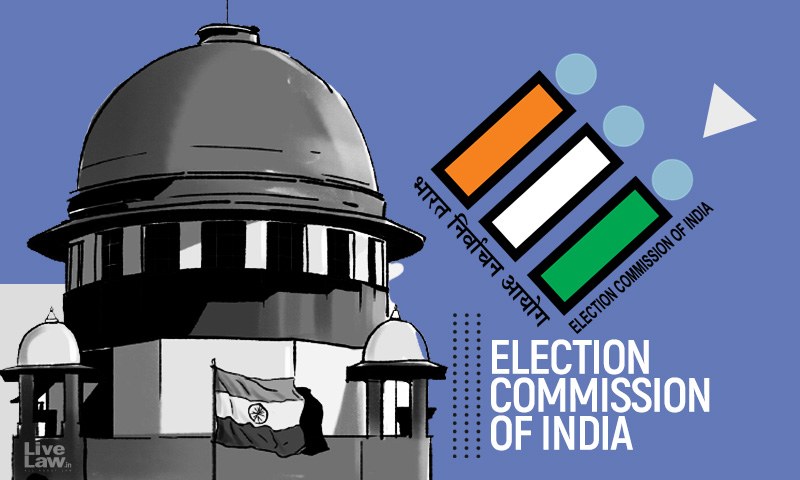 Election Commission of India has told the Supreme Court that offering any freebies either before or after the election is a policy decision of the party and that the Commission cannot regulate state policies and decisions which may be taken by the winning party when they form the government.

"That offering/distribution of any freebies either before or after the election is a policy decision of the party concerned and whether such policies are financially viable or its adverse affect on the economic health of the State is a question that has to be considered and decided by the voters of the State. The Election Commission of India cannot regulate state policies and decisions which may be taken by the winning party when they form the government. Such an action, without enabling provisions in the law, would be an overreach of powers," the affidavit states.

The affidavit has been filed by ECI in the PIL preferred by Ashwini Kumar Upadhyay seeking directions to the ECI to not permit political parties to promise or distribute irrational freebies from the public fund before elections and de-register political parties or seize election symbol of the parties which do so.

It may be noted that the bench of CJI NV Ramana, Justice AS Bopanna and Justice Hima Kohli while issuing notice on January 25, 2022 had observed that it was undoubtedly a serious issue, but wondered what the Court could do to solve the problem.

ECI in the affidavit has relied on the Top Court's judgement in S. Subramaniam Balaji Vs State of Tamil Nadu & Ors. (2013) 9 SCC 659 wherein the issues of political parties promising freebies to voters if elected to powers was raised.

In the said judgement, the Top Court had with regards to the role of ECI had observed that,

"Therefore, considering that there is no enactment that directly governs the contents of the election manifesto, we hereby direct the Election Commission to frame guidelines for the same in consultation with all the recognized political parties as when it had acted while framing guidelines for general conduct of the candidates, meetings; processions, polling day, party in power etc. In the similar way, a separate head for guidelines for election manifesto released by a political party can also be included in the Model Code of Conduct for the Guidance of Political Parties & Candidates. We are mindful of the fact that generally political parties release their election manifesto before the announcement of election date, in that scenario, strictly speaking, the Election Commission will not have the authority to regulate any act which is done before the announcement of the date. Nevertheless, an exception can be made in this regard as the purpose of election manifesto is directly associated with the election process."

ECI in the affidavit based on the direction laid down in S Subramanian Balaji's case has said that,

"The Election Commission of India, following the aforesaid Judgment of this Hon'ble Court in S. Subramaniam Balaji (Supra), issued guidelines, incorporated as Part VIII of the Model Code of Conduct (MCC), to be adhered to by the political parties and candidates while releasing their election manifesto for any election to the Parliament or State Legislatures."

It has further been stated in the affidavit that MCC guidelines have been framed by the Election Commission of India after consultation with recognized political parties.

"The promises made in manifestos are not enforceable under election law; however, the Election Commission of India, vide Letter dated 27.12.2016, advised all the recognized political parties to submit a declaration along with copies of manifestos that the programme/policies and also to see that promises made therein arc in consonance with Part VIll of MCC," affidavit further states.

With regards to the relief in the plea for inserting an additional condition of barring the political parties from promising/ distributing irrational freebies from the public fund before election in para 6A, 6B and 6C of Election Symbols Order, 1968, ECI has said that such a situation would result in parties losing their recognition even before displaying their electoral performance in elections.

For the relief sought in the PIL for seizing election symbol/deregistering the political party which promises/distributes irrational freebies from public fund, ECI referring to the judgement in Indian National Congress (I) vs. Institute of Social Welfare & Ors. ((2002) 5 SCC 685), has said that registration of political parties can only be cancelled on 3 grounds which are:

(a) where a political party has obtained registration by practising fraud or forgery;

Referring to the 3 grounds, ECI has said that since the practice of political parties promising/distributing irrational freebies using public funds before elections does not fall within the above exceptions, it has no power to de-register the parties.

ECI has also stated in the affidavit that Upadhyay had also filed another plea pending seeking directions to enable the ECI to de-register parties which are pending before the Supreme Court.