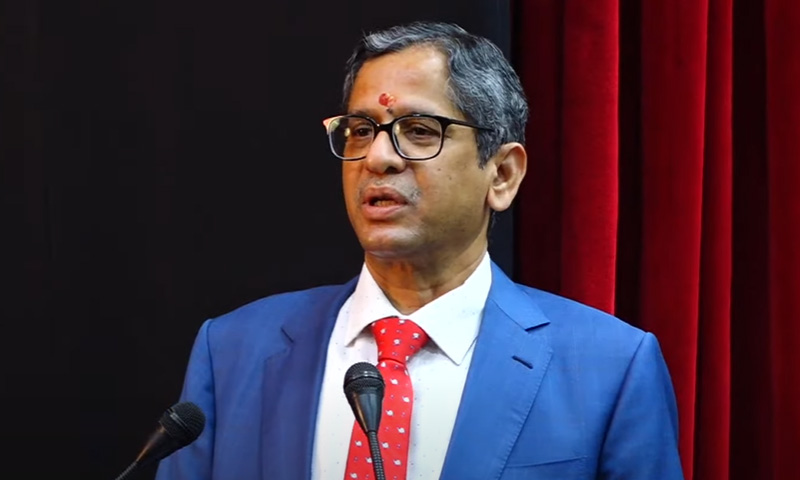 Chief Justice of India NV Ramana on Sunday reflected upon the acute relevance of the teachings of Swami Vivekananda. He was addressing an event as the Chief Guest to mark the 128th anniversary of the historic Chicago Address of Swami Vivekananda and the 22nd Foundation Day of Vivekananda Institute of Human Excellence, Hyderabad.

"Swami Vivekananda, in his address, propagated the idea of tolerance and universal acceptance. He analyzed the dangers posed by the meaningless and sectarian conflicts in society to the nations and civilizations", the CJI remarked while referring to Swami Vivekananda's Chicago Address at the world "Parliament of Religions" in 1893.

The Chief Justice of India further opined that it is of vital importance that the ideals of Swamiji are instilled in the youth of today. He went on to remark that the true essence of religion lies in the ability to advocate for tolerance and the common good.

"Long before the painful churning that took place in the subcontinent during the freedom struggle resulting in framing of an egalitarian Constitution of India, he advocated Secularism as if he foresaw the events to unfold. He firmly believed that the true essence of religion was the common good, and tolerance. Religion should be above superstitions and rigidities. To fulfill the dream of making resurgent India through the principles of common good and tolerance, we should instill the ideals of Swami Ji in today's youth", the CJI stated.

The CJI further opined that Swami Vivekananda's Chicago Address provided a respectful recognition to India which at that time was merely recognized as a colony. He also stated that Swamiji's address drew the world's attention to the ancient Indian philosophy of Vedanta which preaches love, compassion, and equal respect for all.

The Chief Justice of India further lamented that the youth of the country has great potential to achieve greater good and transform the character of the nation. Opining that young minds are generally the most reflective, he remarked,

"The greater challenge in this path is the ability to differentiate between right and wrong choices. The youth often perceive every action with a clear set of principles- they don't tolerate either injustice towards themselves or towards others. They don't compromise with their ideals, come what may. They are not only selfless but are also adventurous. They are willing to sacrifice for the cause they believe in. It is these unadulterated minds and pure hearts which form the backbone of our nation."

The CJI then proceeded to make reference to young freedom fighters who had immense contribution in India's struggle for independence. BIR-SA Munda- the young tribal leader who mobilized the tribal community against the formidable British regime, the trio of Bhagat Singh, Sukhdev and Rajguru who valiantly fought for a free India till their last breath and Manyam Veerudu- Alluri Sitarama Raju, the revolutionary leader who was shot during the resistance movement, the CJI observed.

"The democratic rights that we take today for granted are a result of the struggles of thousands of young people who took to the streets fighting authoritarian figures either during the freedom struggle or the dark days of emergency. Many lost their lives, sacrificed lucrative careers, all for the greater good of the nation and society. Trust the youth to check the deviations in a society's journey towards peace and progress", the CJI remarked on the role of the youth in nation building.

The CJI also noted that India is a fast-growing nation with a vibrant economy. Referring to a survey he opined that more than 45% of India's population is the youth. Furthermore, nearly 65% of our country's total population is between the age group of 15 to 35. As a result, he urged the youth to take a more proactive stance in creating change in society.

Emphasising on the existing urban-rural divide in India, the CJI implored the youth to be more socially and politically aware.

"You must know the social ills and contemporary issues facing the society and the polity. Read books to expand your vision and diversify your opinion. Although these days we have multiple tools to keep ourselves engaged within the four walls of our house, yet we should take time to step outside. Focus on your health and engage in physical activities and sports. Visit the slums to be conscious about the divides that exist even within urban spaces. Visit villages to be aware about rural living.", the CJI remarked.

The Chief Justice of India further stated that he comes from a rural background as a result of which he faced immense hardships in educating himself.

"Education and awareness constitute key components of empowerment. I come from a rural background. We struggled to educate ourselves. Today resources are available at your fingertips. There is unlimited access to a world of information. These advantages come with a heavy burden. The hyper awareness that modern society allows, with the ease of flow of information mandates that students are more socially and politically aware."

The CJI further proceeded to observe that with time people are realising the immense power that can be yielded by the youth through their speech. It is well established that the voices and actions of the youth can change the world, he stated. He also urged educational institutions to play an active role in empowering students to become change makers.

"Educational institutions have a huge role to play. They must inform and create awareness in the student body about the rights and restrictions. They should promote and transmit a culture of lawfulness, of respect for the law. Institutions should equip young minds with knowledge about their rights and duties and empower them to be change-makers in society."

The CJI concluded his speech by quoting Swami Vivekananda:

"In a day, when you don't come across any problems- you can be sure that you are travelling in a wrong path"

Urging the youth to serve the nation in order to take it to greater heights, the CJI remarked,

"You are the stewards of this nation and custodians of a very rich tradition. I hope that you contribute by way of giving back something to this society, to this great nation which has bestowed you with so many privileges. We are the nation of the young! And upon your young shoulders lies the responsibility to fulfil India's destiny"