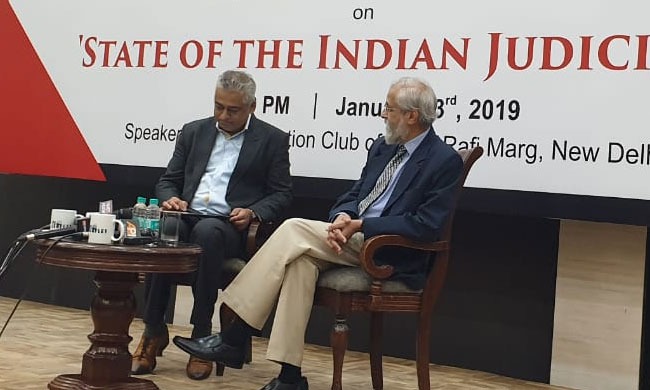 In conversation with senior journalist Rajdeep Sardesai on the 'State of the Indian Judiciary' at the Constitution Club in New Delhi, he admitted to being disappointed that the said resolution was not published on the official website of the apex court, and moreover reversed on January 10 with the cryptic explanation that "additional material" has come to light favouring the elevation of Justices Sanjeev Khanna and Dinesh Maheshwari instead.

However, when asked if he got the impression that it could have been a bid to simply "get rid" of him, to wait for his impending retirement, Justice Lokur assertively replied in the negative. Acceding that he "cannot say what happened between December 12 and January 10", Justice Lokur also declined to attach any "motives" to this move of the Collegium.

When Sardesai probed if the judge had insisted that the CJI have the December 12 resolution uploaded, Justice Lokur replied, "there was no reason to ask...there is no such Standard Operating Procedure..."

"But you say that judicial officers must be held accountable...other judges have written to the Chief Justice...", Sardesai persisted. "What happens within the Collegium happens in utmost confidence. If I have been a part of a discussion, it is in confidence and I am not going to betray that trust...When we take a decision, it is expected to be uploaded. I am disappointed that it was not uploaded", iterated the judge.

"Can Justices Nandrajog and Menon come out and ask that this additional material, on the basis of which they have been bypassed in appointment, be placed in public domain?", quizzed Sardesai.

"It is not about hiding behind the MoP...what if this material is derogatory? can it be out in public? I am not sure...What kind of material is it? I assume you don't know. What if it is incorrect, which the Collegium believes to be correct, and defamatory?", reflected Justice Lokur.

In response to how, upon this additional material coming to light, which was compelling enough to overturn a decision once taken, Justices Nandrajog and Menon could be deemed to be suitable to continue as Chief Justices of the respective High Courts, Justice Lokur vehemently advanced, "I wasn't there on January 10, so I can't say what this material is. But every High Court Chief Justice cannot become a Supreme Court judge! How can you say that because he is the Chief Justice of a High Court, the judge should also be in the Supreme Court?"

On the Collegium system of judicial appointments

In context of transparency in the Collegium system, he observed, "In my experience, there is no element of nepotism or 'Sifarish'. There are no attempts by the Chief to bring in people who are close to him. If a suggestion for appointment or transfer is made by the CJ, we discuss it; there is a debate. It is not that because the CJ says so, everybody agrees. There is a healthy discussion and as a member of the Collegium, I am entitled to disagreement...I don't think that the CJ has a certain element of primacy. He is the first among equals. He initiates discussion, but as an equal, I am entitled to disagree..."

Even as he assured that the Collegium system has not entirely failed, he agreed that there is a need to bring about change- "Nothing is cast in stone. We are dealing with humans, not machines. Certain things need to be done...the NJAC judgment spoke of certain standards in the appointment procedure. Suggestions were invited from lawyers and the public. Almost 1000 pages of suggestions were given which were then analysed by the then-ASG and a Senior Advocate. We were told by the Attorney General that the Department of Justice was coming out with the MoP. But this MoP is silent on the eligibility criteria. It is silent on transparency..."

"For example, if the High Court Collegium makes a recommendation and the state government does not respond within 6 weeks, then the Government of India can proceed on the assumption that they have no objection. Now, if they don't, then what happens? Files have remained pending. What is the sanction for this inaction. The MoP is silent on that...", continued Justice Lokur.

"A view has been taken in the NJAC judgment, which I think is correct, that for the independence of the judiciary, in the existing circumstances, the Collegium system is the best. But it does need some tweaking...However, Just because there are some problems, we cannot simply throw it out, Like we threw out the pre-Collegium system, And now bring in a third system!", he opined.

"It could be the perception that the government wants convenient judges and chooses to sit on files as and when it suits itself. But it still becomes a matter of public knowledge; everybody gets to know...Now I don't know if that is what happened with Justice (K. M. Joseph), but he was eventually appointed (to the apex court). So perhaps it was only a question of time...There has to be some mechanism by which the laid-down timelines are adhered to, failing which it would be deemed as consent. There could also be scope for some discussion between the government and a member of the Collegium or the CJ...Nobody can sit on a file; Not just the government, but even the judiciary...", said Justice Lokur.

On the presser of January 12, 2018 and judicial corruption

When Sardesai asked if the much-talked about press conference had actually been worth the effort, Justice Lokur replied in a lighter vein, "Why not? I am not sure what we achieved, But we did achieve something!", adding that the presser did bring about a certain degree of openness and hence, some change.

"What would you say to the Soli Sorabjees and the Fali S. Narimans of the world who said that any differences should have been resolved internally and not splashed out in public", asked Sardesai.

"Time and again, We did have a discussion with the then-CJ but no positive response was forthcoming. And this happened not once, not twice. So we thought it was important for the people to know...We went to the public after we a had circulated a letter to the CJ in October (2017). So there was time in between October and January..."

When the veteran journalist questioned why the judges had focused on the functioning of the court on the administrative side rather than on exposing judicial corruption, Justice Lokur, on a humorous note, asked Sardesai to "give (him) the names of those judges".

"I could but your fellow judges would then hold me in contempt of court", answered Sardesai. "The Truth is a good defence If you have the name of some corrupt judge", quipped Justice Lokur.

At this point, Senior Advocate Indira Jaising raised the issue of the removal of Justice Narayan Shukla of the Allahabad High Court, which was recommended by former CJ Dipak Misra in connection with the infamous Medical College Admission Bribery scam. "There was an in-house inquiry which was to be dealt with by the CJ. I have no idea what happened in that inquiry", said Justice Lokur.

Further, Advocate Prashant Bhushan also pointed out the instance of a Chief Justice of High Court against whom a sitting judge of the Supreme Court has levelled corruption allegations and who is being considered for elevation- "the allegation was that the judge had acquired 6 properties after his appointment to the bench which he has severely undervalued...There is Nothing to show that any investigation took place In those allegations..."

"If there is evidence of corruption or enough to show that a person is not honest, then there should be a system in place to deal with the situation. I don't know what you mean that the judges protect their own. If a person is guilty, he is guilty. If he is innocent, then he needs no protection", weighed in Justice Lokur.

"There was an allegation against a particular judge and I happened to be on the in-house committee. That inquiry was conducted very fast. We found that the judge was dishonest so we did make a recommendation to the CJ. So if there is material that a person is corrupt or reason to believe him to be corrupt, then there is a procedure...", the judge assured.

"I don't know what you mean by distance between the government and the judiciary. Are you saying we should not see the face of the PM? If a judge is totally secluded, he wouldn't know what is going on. On the one hand, you say there should openness, and on the other, you expect the judge to be in an Ivory tower...", remarked Justice Lokur.

"There is Nothing wrong in the CJ inviting the PM for dinner. This would be stretching it too far...The PM and the President both host the new CJ too. You are reading too much into it...", he continued.

Justice Lokur concurred that a line needs to be drawn so far as post-retirement jobs for judges are concerned- "Like the NHRC law says that the chairman should be a retired SC judge. Suppose all judges say that they won't be a part of it upon retirement? Can the body function? Similarly, The CAT requires a retired Chief Justice of a High Court at it helm...So if a law mandates a retired judge, change the law!..."

He even asserted that he would not accept appointment as a Governor or even a Rajya Sabha member.

When asked if the courts should steer clear of political cases like Kalikho Pul, Rafale, the CBI controversy and Ayodhya, though he declined to comment on particular instances, Justice Lokur agreed that the judiciary, not just in India but even internationally, should stay away from matters with a political undertone.

Refusing to discuss if the Supreme Court should have abstained from interfering in sundry other cases like the BCCI's administration of Indian cricket and focussed on core issues instead, the judge conceded that there are cases where the court has overstepped its jurisdiction. However, he went on to add that "overreach" would be a strong term to describe it- "It Happens with all branches, including the Executive and the Parliament when the Judiciary comes in to strike down their action...similarly, the judiciary also can misunderstand its powers..."

Finally, the judge stated that though he is not depressed with the state of Indian judiciary as represented in the newspapers daily, he ventured that there Should be discussions on "whether there should be 20,000 judges or 50,000 or 1 lakh. Speedier justice. Cases lying pending for years. How to make justice more accessible to people"

"Why are we not discussing these subjects? If we made a mistake, we must step back!"

"when you see judges and their Judgments, their behaviour and character making headlines, how does it make you feel? Were you Worried in the years when you were a judge if your name would make it to the front page?", asked Sardesai.

"No, it doesn't trouble me at all. Every institute should be under the microscope!", said Justice Lokur.

"Why do judges only say this when they are retired? Otherwise, they say they are not accountable to the bar?", the journalist delved deeper.

"You did not ask me this when I was a sitting judge. Else, I would have said the same thing", commenter Justice Lokur in good humour.

Look at the CBI case. The Chief Justice decided in respect of Alok Verma but in determining if M. Nageshwar Rao's appointment was valid, he recused?", Sardesai suggested.

"What are you saying? That the CJ should have heard the case and taken the meeting (of the Selection Committee) tomorrow...so he did hear the Alok Verma case. Now what?", replied the judge.