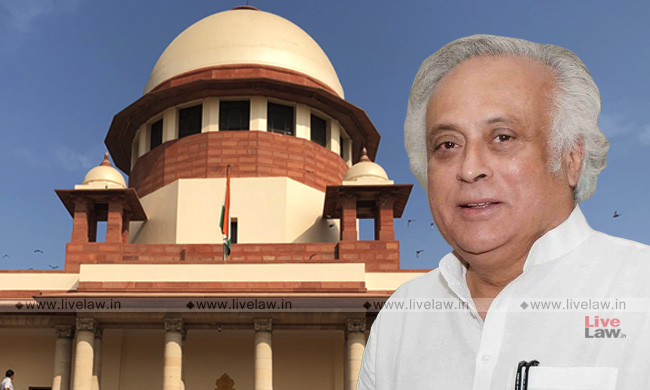 Congress Leader Jairam Ramesh has moved Supreme Court challenging the Citizenship (Amendment) Act of 2019.He submitted that submitted that Citizenship (Amendment) Act of 2019 is a brazen attack on the core fundamental rights envisaged under the Constitution. The impugned enactment exfacie violates the fundamental guarantees under Article 14 as also Article 21 of the Constitution....

He submitted that submitted that Citizenship (Amendment) Act of 2019 is a brazen attack on the core fundamental rights envisaged under the Constitution.

The impugned enactment exfacie violates the fundamental guarantees under Article 14 as also Article 21 of the Constitution. Further, the impugned Act has been enacted disregarding the Report of the Joint Parliamentary Committee dated 07.01.2019 as also the terms of the Accord between AASU, AAGSP and the Central Government on the Foreign National Issue signed on 15.08.1985 (Assam Accord). The impugned Act is also in the teeth of the law laid down by this Hon'ble Court in Sarbananda Sonowal v. Union of India (2005) 5 SCC 665 and breaches the international obligations approved and agreed by India through International Covenants.

The Petition challenges the Act on the following main Grounds

Classification on the basis of religion and geography unsustainable

Secondly, the impugned Act treats equals as unequals, i.e., all persons facing religious persecution in their native country are not being treated alike as only Hindus, Sikhs, Buddhists, Jains, Parsis and Christians from Afghanistan, Bangladesh and Pakistan are being made eligible for Indian Citizenship;

Thirdly, the impugned Act suffers from manifest arbitrariness, as it arbitrarily groups only 3 countries along with only 6 religions and expressly excludes specific religions and regions from availing the benefits of the Citizenship Amendments

Fourthly, the impugned Act not only creates a class within a class of people fleeing religious persecution but also creates a group of people who would be rendered stateless and without proper procedures put in place would be left in absence of any protection of the law, thereby frustrating the mandate of Article 21 of the Constitution of India.

Fifthly, the impugned Act fails to provide all the persons residing on the Indian soil the basic yet fundamental right of equality before the law guaranteed under Article 14 of the Constitution;

Sixthly, the impugned Act is in complete disregard to the observations and recommendations of a constitutional expert deposing before the Joint Parliamentary Report on the "Citizenship Amendment Bill, 2016", which only shows the arbitrariness inherent in the legislation.

Seventhly, the impugned Act further suffers from arbitrariness on the ground that in the Joint Parliamentary Report on the "Citizenship Amendment Bill, 2016", the Government has admitted that there are only 31,313 persons belonging to minority communities (Hindus - 25447, Sikhs - 5807, Christians - 55, Buddhists – 2 and Parsis - 2) who have been accommodated under this 'religious test' and thus have been given long term visa on the basis of their claim of religious persecution in these three countries (Afghanistan, Pakistan and Bangladesh) and want Indian Citizenship and hence would benefit from the Citizenship Amendment;

Eighthly, it violates the Assam Accord signed in the year 1985, with specific emphasis on Clause 6 of the Accord which provides constitutional, legislative and administrative safeguards, as may be appropriate, to protect, preserve and promote the cultural, social, linguistic identity and heritage of the Assamese people;

Ninthly, it is contrary to the law laid down by  Supreme Court in Sarbananda Sonowal v. Union of India (2005) 5 SCC 665

It is also submitted that the impugned Act is neither refugee protective nor an illegal immigration antidote, as it does not provide refuge for persecuted minorities to settle in India from the rest of the world and even while addressing the remaining part, it excludes large categories based upon motivated and unconstitutional tests of classification which cannot be upheld before the Supreme Court.

It is also submitted that, the impugned Act promotes rather than checks illegal migration and is inextricably intertwined with the bizarre concept of a national "National Register of Citizens", as it does not even attempt to address the humanitarian and logistical issues of excluding millions and is clueless as to where to house them, where to deport them and how to deal with them.