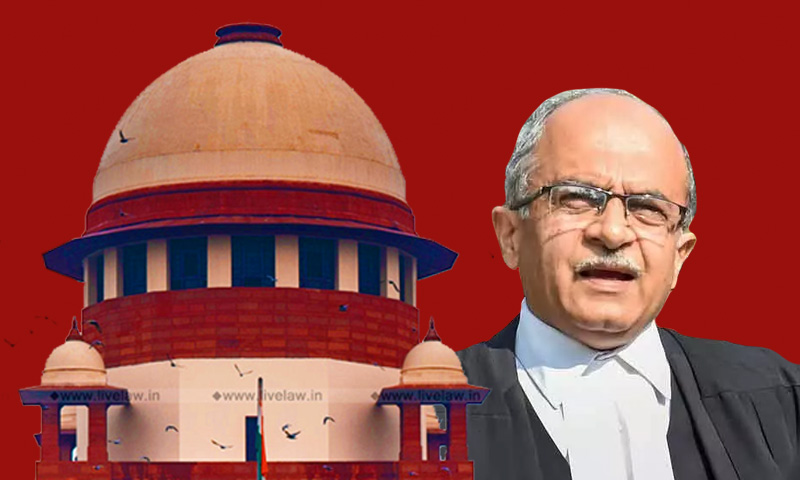 Advocate Prashant Bhushan has moved the Supreme Court seeking review of the contempt verdict passed against him by a Bench led by Justice Arun Mishra for his remarks over CJI and functioning of the Supreme Court. Filed through Advocate Kamini Jaiswal, the review petition states that the contempt proceedings against Mr. Bhushan should not have been heard by a bench comprising of...

Advocate Prashant Bhushan has moved the Supreme Court seeking review of the contempt verdict passed against him by a Bench led by Justice Arun Mishra for his remarks over CJI and functioning of the Supreme Court.

Filed through Advocate Kamini Jaiswal, the review petition states that the contempt proceedings against Mr. Bhushan should not have been heard by a bench comprising of Justice Arun Mishra.

Mr. Bhushan has cited various instances suggesting that Justice Mishra's presence on the Bench raises a reasonable apprehension on his part of getting a "fair and impartial hearing". One of such instances, as stated in the petition, reads thus:

"On several occasions Hon'ble Justice Arun Mishra has orally accused the Review Petitioner of committing contempt of court when he had merely mentioned that it may be inappropriate for a particular judge to hear a particular case in circumstances where conflict of interest was involved."

Further, he has contended that the inherent power of the Supreme Court under Article 129 to punish for contempt of itself is not absolute.

He has submitted that such power is subject to "due process requirements" that flow from the constitution and therefore, he has asserted that the procedure and punishment for contempt should be governed by the Contempt of Courts Act, 1971.

Reliance is placed on Supreme Court Bar Assn. case (1998) 4 SCC 409, whereby it was held that no power of the Supreme Court is unlimited and even the power under Article 142 is only to ensure complete justice to the parties before it.

Mr. Bhushan has also objected to passing of the conviction judgment without hearing the Attorney General of India. He has stated that there is a prohibition on taking suo motu notice directly on the judicial side, and the same require AG's consent.

In this context he submitted that the decision in P N Duda's case (which was cited in the SC's contempt verdict to justify initiation of suo moto proceedings) is not a settled position of law.

"In respect of the maintainability of the petition and the procedure in case of suo motu petition on information received, Justice Ranganathan opinion did not concur with that of Justice Mukharji but was in fact partly dissenting. Thus, the aspects on the maintainability of the petition without the permission of Attorney General, and in particular the procedure to be followed in such cases, there was no concurrence between both the judges and thus those observations in the judgment of Justice Ranganathan do not form part of ratio of the judgment," the plea avers.

Today, Bhushan deposited before the SC Registry the toke fine of Rupee One imposed by the Court in the contempt case

The contempt judgment has the effect of making criticism of the Supreme Court an offence and will have a "serious chilling effect" on any discussion relating to the Supreme Court : Bhushan's review plea states.@pbhushan1

Other grounds taken by Mr. Bhushan include:

Rule 6(2) of the 1975 Rules requires that "When action is instituted on petition, a copy of the petition along with the annexure and affidavits shall be served on the person charged". However, in complete and direct violation of this rule, a copy of the petition of Mr. Maheswari that was the basis for initiating the Suo Motu proceedings was not supplied to the Review Petitioner.

2. Tweets in question were prima-facie not criminal contempt as per the decision in PN Duda Case

"Two tweets of the Review Petitioner were completely innocuous and could not amount to criminal contempt. However, in the impugned judgment, there is no discussion on this aspect on which detailed submissions were made and this refusal to consider the statements in the tweet in light of the standards set by this Hon'ble Court itself (in PN Duda's case)."

3. Truth as a defence

Court has straightaway determined Mr. Bhushan's tweets to be not in good faith, "without even attempting to examine" if the averments based on which he claimed to form his view, were true.

"The impugned judgment errs on the face of its record in altogether ignoring the universally accepted defence of fair comment"- Bhushan's review plea stated.

4. Standard of proof in criminal contempt is 'beyond reasonable doubt'

Mr. Bhushan has thus sough a declaration that a person convicted for criminal contempt by the Supreme Court, including Mr. Bhushan, would have a right to an "intra-court appeal" to be heard by a larger and different bench.

He has also sought framing of rules and guidelines providing for intra-court appeal against conviction in original criminal contempt cases.