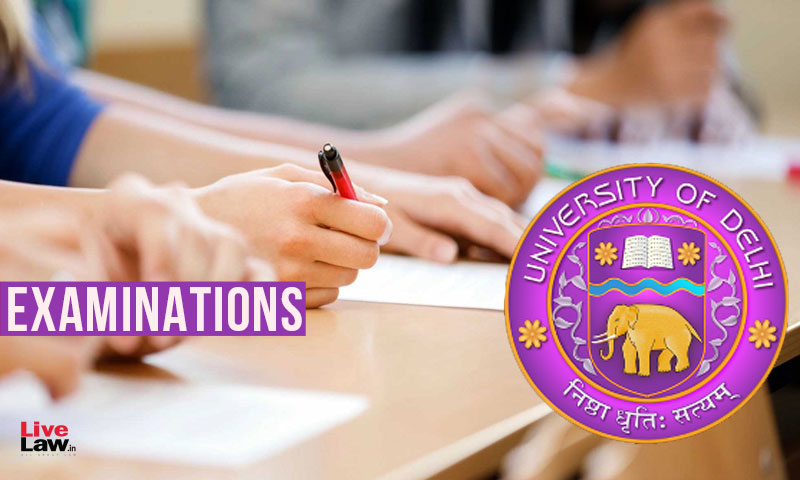 Taking note of the anxieties of the students, the Delhi High Court on Thursday asked the DU to expedite the conduct of the examinations.It observed that the delay in conducting the exams will adversely affect the career possibilities of the students.A bench comprising Justices Subramonium Prasad and Hima Kohli was hearing a batch of petitions challenging the exam schedules of...

Taking note of the anxieties of the students, the Delhi High Court on Thursday asked the DU to expedite the conduct of the examinations.

It observed that the delay in conducting the exams will adversely affect the career possibilities of the students.

A bench comprising Justices Subramonium Prasad and Hima Kohli was hearing a batch of petitions challenging the exam schedules of the University.

During the hearing, the Court asked the DU , "Why is your exam schedules starting from mid August?Earlier you were ready on July 01".

The bench urged the DU to compress the timelines, and try to advance dates set for mocks, actual exams, declaration of results and conducting the physical exams.

The purpose of mock exams is to make the students familiar with the process, he explained.

'We can also advance the final exams by 8 days and commence the same from Aug 10', Prof Gupta said.

The Court recorded the submissions of the University that it is agreeable to commence the exam schedule for final year students on July 27 and to start the Open Book Exams from August 10 and finish it by August 31.

It will later submit an affidavit stating fresh date for declaration of results and conducting physical exams.

The Court has granted time till July 17 to DU to submit an affidavit stating a fresh date for declaration of results for online exams as well as for conducting the physical exams. The matter will be next heard on July 22.

The Court noted that as per DU's proposal, the entire process of examination ends on September 8.

"Why is it still September 2? It should be earlier", the bench remarked.

The Court has also asked the DU to try to advance the evaluation schedule, which, as stated by it, will commence from October 1.

"We're only trying to make you understand the anxiety of the students", the court said.

The bench also clarified that Court it will not interfere with the University's decision to adopt a particular mode of conducting the exams, whether online or offline.

'That issue is not in contention in the matters which are placed before us', court said.

Accordingly, the petition challenging OBE was remitted to the single bench.

The DU stated that the postponement of the exam schedule is due to lack of technical prowess and inadequate experience of students in handling the online exams.

It told the court that this year, a total of 80,0000 final year students from various branches and colleges will be attending online exams for UG Courses alone and out of these, about 95% of students have submitted their forms for online exams. The remaining students have been given the time until 25th July to submit forms for the examinations, submitted by the DU

The verification of the identities of the students is also a huge task, asserted by the DU.

'We are taking this much time for organizing physical exams as time would required for preparing venues, sanitizing the same , arranging the answer sheets, etc', stated the DU

Delay will affect the career choices of the students.

The Court observed that, "Students can't be kept on hold, the more you delay the more career choices are reduced" .

The Court further asked the DU to consider the issue from the point of view of the students and prepare shorter timelines for the conduct of the exams.