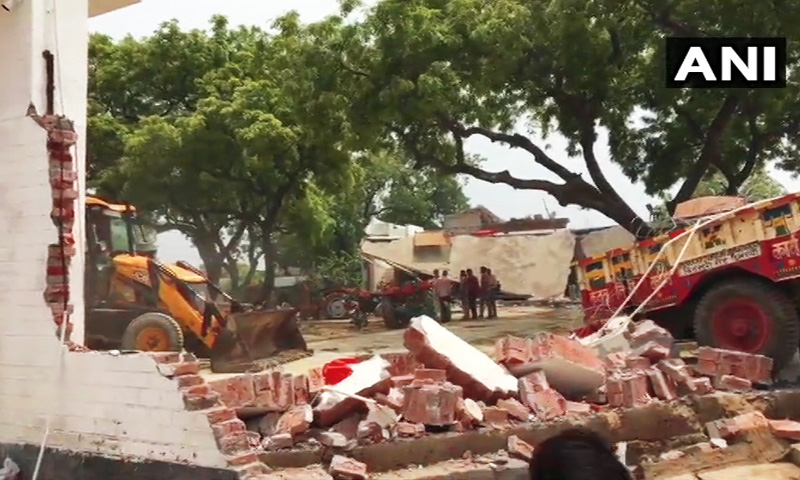 The Allahabad High Court has been moved in a PIL for a free, fair and impartial investigation, by the CBI or a SIT, into the entire episode of his house demolition, following the killing of 8 policemen by his aides.Advocate Prashant Shukla, the petitioner, submits that he wishes to apprise the Court "about the wrongful, illegal, and arbitrary manners being adopted by the administration and...

The Allahabad High Court has been moved in a PIL for a free, fair and impartial investigation, by the CBI or a SIT, into the entire episode of his house demolition, following the killing of 8 policemen by his aides.

Advocate Prashant Shukla, the petitioner, submits that he wishes to apprise the Court "about the wrongful, illegal, and arbitrary manners being adopted by the administration and the State authorities while functioning, without any authority of law and due procedure of law"

It is contended that the matter concerns not only an accused person, Vikas Dubey but the general public, in addition to the citizens of the State of Uttar Pradesh "because if such acts are allowed to happen again or encouraged, it will lead to a state of chaos, lawlessness and anarchy in the entire State".

"The matter pertains to illegal, wrongful, arbitrary and vengeant act of the State authorities, wherein the house of a wanted person and an accused in many cases, namely, Vikas Dubey has been demolished/razed and his cars and tractors destroyed on 04/07/2020, without any authority of law or due procedure of law, only as an act of revenge and retaliation because of the killing of 8 police persons on 03/07/2020", the plea avers.

The petitioner submits that while he has full sympathy and compassion with the families of the 8 policemen killed and 9 policemen injured in the entire incident, and that it is an act of brutality and cowardness and can never be forgiven, but the act of the police and administration cannot be an alternative or reply to it.

"The instant case is also an example of failed and shabby, prosecution, wherein a person, who is an accused since 1990 is roaming around freely, with over 60 cases against him till 2020, until at last he commits a serious offence as alleged", it is argued, stating that the duty of the prosecution is not limited to simply lodging of First Information Report but to proceed further in prosecuting an accused person, which has not been the case in hand.

"The first criminal case against him was registered in the early 1990s and by 2020 he had over 60 criminal cases against his name. As of now, he is said to be connected to the killing of a Minister of State inside a police station and in another recent incident is the main accused in the killing of 8 policemen during an attempted arrest...His housewife, namely, Richa Dubey has also contested local body elections", it is narrated.

The petitioner asserts that Dubey had not been convicted in any of the cases till date and as per the fundamental postulate of our criminal jurisprudence, a person is innocent until proven guilty, beyond all reasonable doubt but the media and the State authorities had already held him guilty, which is against the law of the land.

"A case for attempt to murder was lodged by one Sri Rahul Tiwari, resident of Village-Bikru against Vikas Dubey, after which a team of police officials comprising of local police stations, decided to raid his house, situated in Village-Bikru, Police Station-Chaubeypur,District-Kanpur on the intervening night of 03/07/2020-04/07/2020, wherein during the raid, the police team was attacked by several men, alleged to have been his men and in the ambush, 8 (eight) police men were killed and several injured. Thereafter, on the very next day, the District Administration at Kanpur and police authorities decided to visit his house, wherein the house was completely demolished and also 2 cars as well as 1 tractor was also dismantled, displaying an example of revenge policing. The news regarding the same was published in almost all the Daily Newspapers and also displayed on almost all news channels", the plea expounds the sequence of events.

It is pointed out that till date the State Government, its authorities or the District Administration has not given any official statement, press release, order, notification that as to under what authority and law, act, statute, rule, provision or section, the instant act was done- "The posture of silence and aloofness adopted by the State Government clearly denotes the express or implies consent of the State Government and active as well as passive involvement in the whole incident"

It is advanced that the house of accused happened to be his ancestral property, wherein besides him, the family also resided, and that it is the settled principle that there can be no vicarious liability for a criminal act or offence and the parents and family cannot be allowed to suffer and pay for the acts of the accused.

Further, it is urged that "as per the established and known norms of investigation, the crime scene is said to be preserved and prevented from any harm or destruction" but in the instant case, the entire crime scene, "instead of being attached and confiscated", was "destroyed by the police themselves", which is "astonishing" and also "creates doubt on the genuineness or the entire episode".

The following moot questions or points for consideration,have been raised for intervention/indulgence of the Court:

a.' Whether any law, act, statute, rule, provision or section empowers the State and its instrumentalities to function in such an arbitrary, wrongful, illegal and malafide manner ?

b. Whether the fundamental rights of a person can be crushed/sacrificed in such an arbitrary manner ?

c. Whether the retribution philosophy of punishment, which is based on the concept of eye for an eye is the answer or the norm in Indian criminal justices system?

d. Whether the police and authorities are meant to maintain law and order, prevent crime and make it a welfare state or whether they are meant to instil fear and in the minds of general public?

e. Whether the act of police and authorities creates doubts of clouds as to something bigger and sensitive, which needs investigation ?

f. Whether it is the duty of State to act swiftly in prosecuting and catching hold of accused persons or not?

The matter is listed on Monday before the Court.

Vikas Dubey was killed on Saturday morning, in what police claimed to be an encounter killing, while he was being taken from Ujjain to Kanpur.

Five of Dubey's aides were also killed in alleged encounters.

A plea has been moved in the Supreme Court by Peoples Union for Civil Liberties seeking SIT probe into these killings.