Discrepancies In Evidence Against Delinquent Not A Ground To Interfere With Findings Of Disciplinary Inquiry: SC [Read Judgment] 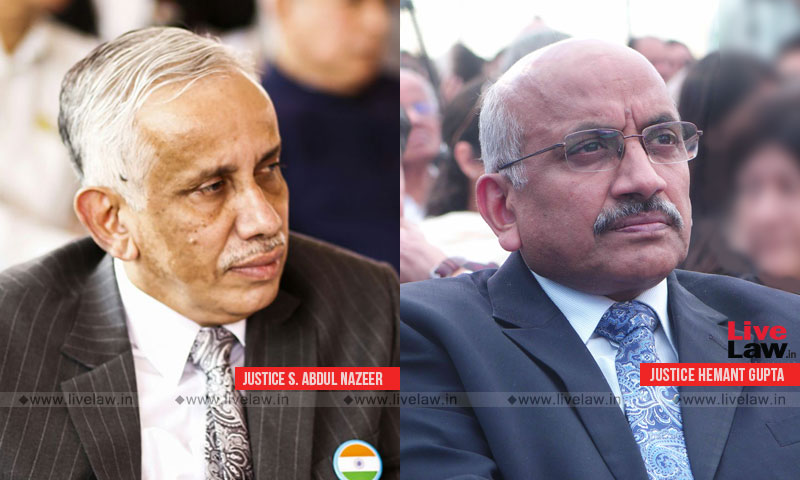 The Supreme Court has observed that the  findings of disciplinary inquiry cannot be interfered only on the ground that there are discrepancies in the evidence against the delinquent.

The bench of Justice S. Abdul Nazeer and Justice Hemant Gupta observed that, once the evidence has been accepted by the departmental authority, in exercise of power of judicial review, the Tribunal or the High Court could not interfere with the findings of facts recorded by re-appreciating evidence as if the Courts are the Appellate Authority.

In this case, a police inspector was dismissed from service after conducting departmental inquiry into allegations of corrections levelled against him. The Tribunal and later the High Court set aside the order of punishment on the ground that the evidence against him was not been accepted in criminal trial and that there are discrepancies in the evidence of the witnesses which make it unreliable.

The bench, while considering the appeal filed by the state noted that the power of judicial review conferred on the constitutional court or on the Tribunal is not that of an appellate authority. It said that the Tribunal/Court cannot reappreciate the evidence and to arrive at its own independent findings on the evidence. Referring to Union of India v. P. Gunasekaran, it observed that under Article 226/227 of the Constitution of India, the High Court shall not: (i) re-appreciate the evidence; (ii) interfere with the conclusions in the enquiry, in case the same has been conducted in accordance with law; (iii) go into the adequacy of the evidence; (iv) go into the reliability of the evidence; (v) interfere, if there be some legal evidence on which findings can be based. (vi) correct the error of fact however grave it may appear to be; (vii) go into the proportionality of punishment unless it shocks its conscience.

The respondent relied on the judgment in Allahabad Bank v. Krishna Narayan Tewari wherein it was held that if the disciplinary authority records a finding that is not supported by any evidence whatsoever or a finding which is unreasonably arrived at, the Writ Court could interfere with the finding of the disciplinary proceedings.

We do not find that even on touchstone of that test, the Tribunal or the High Court could interfere with the findings recorded by the disciplinary authority. It is not the case of no evidence or that the findings are perverse. The finding that the respondent is guilty of misconduct has been interfered with only on the ground that there are discrepancies in the evidence of the Department. The discrepancies in the evidence will not make it a case of no evidence. The Inquiry Officer has appreciated the evidence and returned a finding that the respondent is guilty of misconduct.
The disciplinary authority agreed with the findings of the enquiry officer and had passed an order of punishment. An appeal before the State Government was also dismissed. Once the evidence has been accepted by the departmental authority, in exercise of power of judicial review, the Tribunal or the High Court could not interfere with the findings of facts recorded by reappreciating evidence as if the Courts are the Appellate Authority.