'Diversity in Judiciary Has Both Intrinsic and Instrumental Values, It Is A Deeply Worrying Fact That SC Has Now Only One Female Judge Now': Chandrachud J 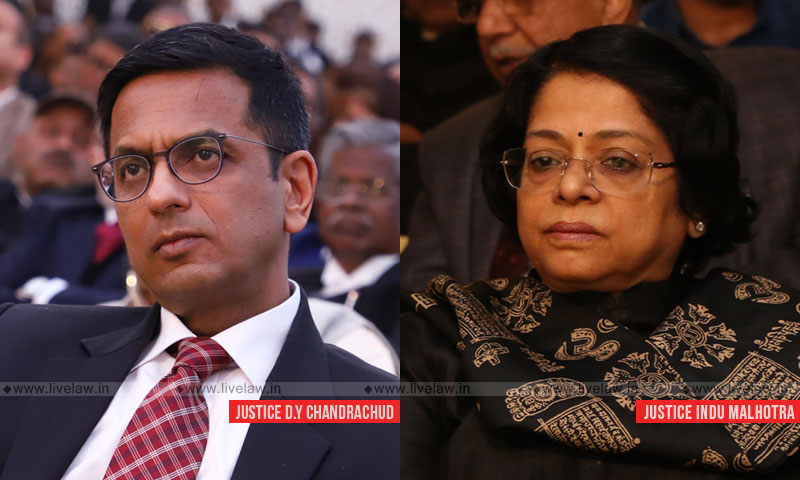 x
If i had the power of mandamus, I would have allowed Justice Malhotra continue beyond tomorrow, said Justice Chandrachud

"Justice Malhotra's retirement means that Supreme Court now has only one female judge on the Bench. As an institution, I find that this is a deeply worrying fact and must promptly receive serious introspection and reflection" Justice Chandrachud said while speaking at Justice Indu Malhotra's virtual farewell.

Justice Chandrachud took the opportunity of Justice Indu Malhotra's farewell organised by the Supreme Court Young Lawyers Forum to comment on the fact that Supreme Court Bench's will only have one female judge after Justice Malhotra's retirement, calling it an 'important issue'.

"As an institution whose decision shape and impact lives of everyday Indian, we must do better. We must ensure the diversity of our Country find reflection in the make up of our Court " he said.

Justice Chandrachud further said that Diversity in Judiciary has both intrinsic and instrumental values.

"Intrinsically having a more diverse Judiciary is an end, a goal in itself and something worth pursuing in its own sake. Instrumentally, having a more diverse judiciary, ensures that diversity of perspectives is fairly considered in decision making process, instills high degree of public confidence in decisions arrived at, and helps us as an Institution to be more attuned to the people we serve" Justice Chandrachud opined.

Justice Chandrachud also said "Let me share with you that after being on the Bench for 21 years, you tend to lose a connect with society, and I always found that sitting with a colleague who had an immediate connect, a contact with society, it was very valuable to share ideas with Justice Indu when we were deciding cases. She always gave me a real life picture, sometimes a grim portrayal of liberty of liberty, equality, whether it was in context of consumer protection matter, or women victim of gender violence"

Justice Chandrachud said that Justice Indu Malhotra has also spoken powerfully and movingly of struggles she had to endure in rising up the ranks of her profession as a woman. At an even in October, she spoke about how she was discouraged from applying for being Senior Advocate.

" She noted how even after being a Supreme Court Judge, she has faced discrimination, in shape of some of her colleagues doubting her competence making it necessary for her to work twice as hard. I can only tell you from bottom of my conscience and with my hand on my soul that I wasn't one of them."

Justice Chandrachud said he hopes that " as we celebrate today, Justice Malhotra's career and accomplishments, we use this opportunity that stories such as hers become more common place and as members of legal fraternity we do our bit to ensure, that it no longer remains as hard as it was for Justice Malhotra for women to climb upper echelons of our profession."

Justice Chandrachud added that "It is a bitter sweet occasion. The sun is setting on a remarkable career of a woman who has broken many glass ceilings & has been exemplar of the manner in which awesome responsibilities of judgeship can be discharged with grit, equanimity, competence and Compassion"

He added that "the Constitution says that Justice Indu has to retire tomorrow, but I do believe as her judgement in Navtej showed, that she is truly young in her mind and vibrant in her inner being and soul."

"I'm sure, in discharging her functions with high degree of competence, She has served as a powerful symbol for many women in the profession. Her story has undoubtedly made their dreams more reachable and their struggles more bearable." Justice Chandrachud said.

Justice Chandrachud shared lines from poem that Justice Sandra Day O'Connor, first woman Justice of Human Supreme Court often used to recite a beautiful poem called 'The Bridge Builder', about an old man who after crossing the river in a deep canyon decided to stay there and build a bridge, stating that it captures Justice Malhotra's approach in paving way for others perfectly.

He added that "She has played an instrumental role in mentoring younger women in legal profession. A write up in LiveLaw yesterday by her law Clerk tells us what a fantastic mentor she has been."

Talking about the choice of his outfit, Justice Chandrachud said that "Amidst all the blues, the greys, the whites and black outfits in the Court, I thought I should make break with tradition by wearing something more suited to the image of this Association as being the 'SC Young Lawyers Forum. The reason why I chose this outfit was to remind all of us that age is just one element of statistics that go into determine if you are young or not, and Sister Indu Malhotra really symbolises that."

Appointed as a Supreme Court Judge on April 27, 2018, Justice Malhotra also holds the distinction of being the second woman to ever be designated a Senior Advocate by the Supreme Court.