The Constitution amendment to provide reservation to economically weaker sections in public employment and higher education has become a reality, with the Rajya Sabha too passing the amendment bill today.After intense debate which lasted for nearly five hours, the upper house passed the Constitution(One hundred and twenty-fourth amendment) Bill 2019, which envisages giving up to 10%...

The  Constitution amendment to provide reservation to economically weaker sections in public employment and higher education has become a reality, with the Rajya Sabha too passing the amendment bill today.

After intense debate which lasted for nearly five hours, the upper house passed the Constitution(One hundred and twenty-fourth amendment) Bill 2019, which envisages giving up to 10% quota to economically weaker sections.

The Lok Sabha had passed the Bill yesterday, on the last day of winter session, with 323 out of 326 MPs present voting in its favour.

At the voting which took place at around 10.15 PM today, 165 members favoured the bill, with 7 members opposing it, resulting in the passing of the Constitution(One Hundred and Third) Amendment Act 2019. 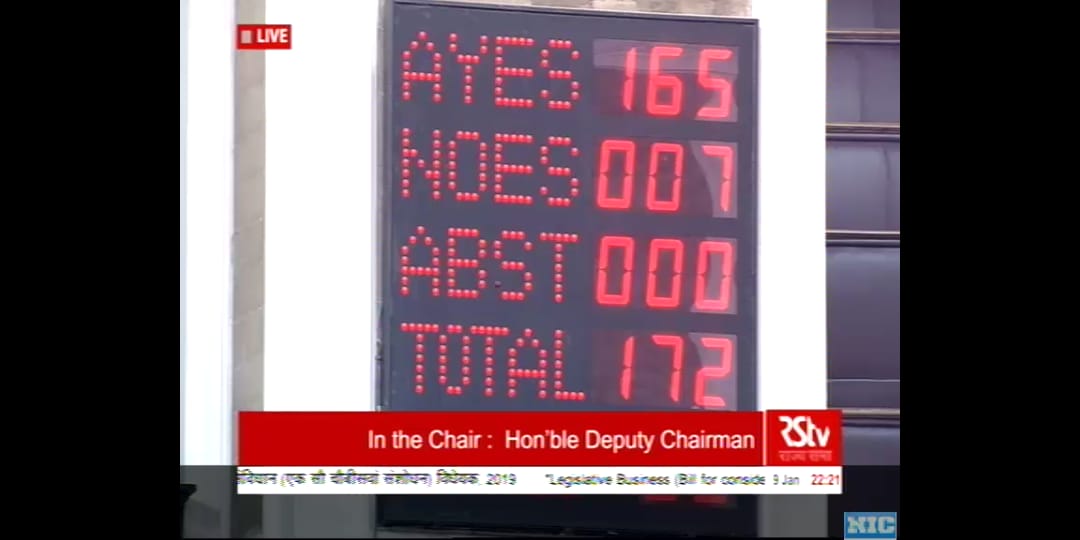 Deputy Chairman Harivansh Narayan Singh announced that the motion moved by MPs Kanimozhi, D Raja, T K Raghurajan etc to refer the Bill to a select committee was voted out by a majority of 155 'noes' against 18 'ayes', with one abstention.

As regards job reservations, the proposed Article 16(6) enables State to make provision for reservation in appointments, in addition to the existing reservations, subject to a maximum of ten percent.

The session of Rajya Sabha, which would have otherwise expired yesterday, was extended by one more day, seemingly to facilitate the tabling of the amendment. The Bill was tabled by Union Minister for Social Justice & Empowerment Thaawar Chand Gehlot.

Law Minister Ravi Shankar Prasad said today in the upper house that the amendment was necessary to achieve the constitutional objective of social justice. He described the amendment as a "last ball sixer".

DMK member Kanimozhi raised vehement opposition to the Bill. She said that a significant constitution amendment cannot be passed in such haste. The members should be given adequate opportunity to study the issue. She pressed for sending the bill to a select committee for deeper examination.

AIADMK member Navaneetha Krishnan opposed the bill saying that poverty cannot be a criteria for giving reservation. Reservation is only for communities facing "historic injustice" and that the amendment would have adverse impact in Tamil Nadu which has a huge majority of backwards, the AIADMK member argued.

Congress MP Kapil Sibal, though welcomed the idea behind the bill, questioned the Government's intent and the criteria fixed by it. The criteria of annual income of Rs. 8 lakhs fixed by government to determine economically weaker section will make more than 90% people eligible for reservation, he said. The economy is in shambles, and enough jobs are not being generated. So, the Government's move will not benefit the needy. He termed that the attempt of the Government was only to give an empty promise. He said that in the absence of data on family incomes, undeserving people will corner reservation benefits by fabricating income certificates.

He also expressed doubts whether the amendment will stand constitutional scrutiny, as Courts have struck down reservation in excess of 50%.

Selija, Congress MP from Haryana, highlighted that the Government has not taken any steps to implement reservation in promotions. She also raised the issue of women reservation. The amendment is a nefarious design to kill reservations step by step, she submitted. "This is not reservation, but Government's attempt for self-preservation", she commented.

Derek O Brien from TMC expressed surprise at the hasty measure adopted by the Government to amend constitution. "This bill is an acknowledgement of guilt, that we haven't created any jobs in last 4 & a half years. It redefines India's poverty line of Rs 32 a day, if we look at the number of Rs 8 lakhs a year, new poverty line is Rs 2100 a day", he said.

Abdul Wahib from IUML opposed the Bill saying that reservation cannot be used as a poverty eradication program.

Ramdas Athawale, Minister of State for Social Justice and Empowerment, said that the move to give reservation to economically backward amongst the upper castes, without affecting the already existing quota for SC/STs & OBCs, needs to be welcomed.

A nine judge bench decision of the SC in the Indira Sawhney case(1992) had capped the upper limit of reservation at 50%. The proposed amendments seek to get over this limit.

The Indira Sawhney case had further held that social backwardness cannot be determined only with reference to economic criterion.

In August 2016, the Gujarat High Court had quashed an ordinance brought by the State Government to provide 10% quota for economically weaker sections in forward castes. The appeal against that judgment is pending in the Supreme Court.

Tamil Nadu has a law which provides for 69% reservations, which has been inserted into the ninth schedule of Constitution to immunize it from judicial review.