Facebook Only Gives A Platform; Its Vice President Will Not Appear Before Delhi Assembly Panel: Salve Tells SC 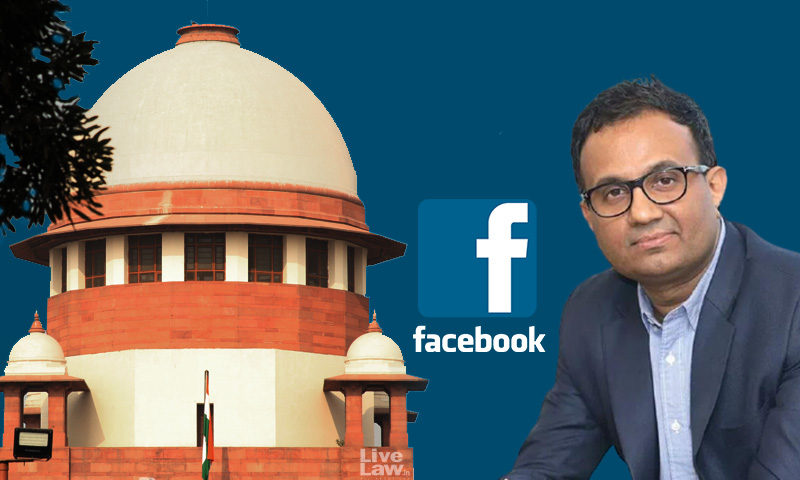 Senior Advocate Harish Salve asserted before the Supreme Court on Thursday that Ajit Mohan, Vice President of Facebook India, will not appear before the Committee of Peace and Harmony of the Delhi Legislative.The senior lawyer made the submission in the writ petition filed by the Facebook Vice-President challenging the summons issued by the Delhi Assembly panel to appear before it in...

Senior Advocate Harish Salve asserted before the Supreme Court on Thursday that Ajit Mohan, Vice President of Facebook India, will not appear before the Committee of Peace and Harmony of the Delhi Legislative.

The senior lawyer made the submission in the writ petition filed by the Facebook Vice-President challenging the summons issued by the Delhi Assembly panel to appear before it in a fact-finding mission into the role of Facebook into Delhi riots.

"Facebook only gives a platform. It does not write anything", Salve submitted alluding to the allegations that hateful messages in Facebook incited communal violence.

He added that the summons issued by the Assembly panel had a coercive tone and pointed out that the counter affidavit filed by it stated that Facebook had no right to silence.

"They have set up an enquiry committee which wants to ask as 'how dare you?'. I am not willing to appear before such a committee", Salve said.

Senior Advocate Dr. Abhishek Manu Singhvi, appearing for the head of the Committee, Raghav Chadha MLA, submitted that Ajit Mohan was summoned only in the capacity as a witness and not as an accused.

No coercive action was ever intended against him, he added.

"The scope of the panel is recommendatory to make positive recommendations for the peace and harmony of NCT of Delhi in future", he said.

Singhvi also said that Facebook had appeared before a Parliamentary Committee but was refusing to appear before the Delhi Assembly.

At this juncture, Justice S K Kaul, the presiding judge of the bench, remarked that it depends on the nature of summons. Last time, the judge had remarked that the summons was not conveying the impression that no coercive action would follow if the Facebook VP failed to appear.

"From what had transpired last time, I thought you would advise your client to issue a better notice", Justice S K Kaul told Dr Singhvi.

Singhvi replied that the affidavit made it clear that the VP was being summoned as a witness in a fact-finding mission.

Solicitor General of India, Mr. Tushar Mehta, submitted that the stand of the Union of India was that Delhi assembly lacked the jurisdiction to embark upon such a fact-finding mission as "law and order" and "police" in the NCT of Delhi were within the exclusive domain of the Central Government.

After these exchanges, the bench said that the matter deserved to be heard at length. Justice Kaul said that constitutional issues relating to the jurisdiction and powers of the Delhi Government vis-a-vis the Union Government may also arise in the matter.

The bench directed the respondents to submit their affidavits by October 31. Rejoinders, if any, have to be filed within two weeks therefrom. The bench said that it will start hearing the matters from December 2.

The top court clarified that the interim arrangement as envisaged on September 23(that the meetings in furtherance of the summons will remain deferred) will continue until further orders.

On September 23, the bench had recorded the submission of Senior Advocate Dr Abhishek Manu Singhvi on behalf of the Assembly panel that the further proceedings on the summons will be deferred during the pendency of the case in the top court.

On that date, Senior Advocate Haris Salve, appearing for the FB Vice President, had questioned the jurisdiction of the assembly panel to ask a private citizen to appear before it.

To coerce a private citizen to appear before the assembly panel with a threat of penalty is a violation of fundamental rights, Salve had submitted.

He had further argued that the Committee lacked the legislative power to make such an enquiry. In this regard, he referred to Article 239AA(3)(a) of the Constitution and said that police and law & order are outside the domain of Delhi assembly.

Mukul Rohatgi, appearing for Facebook, had submitted that legislature cannot act like a court of justice. The panel is already predetermined that Facebook colluded in Delhi riots. They have no authority of law to process an enquiry of this nature, he said.

Singhvi, appearing for the Chairman of the Panel, had submitted that Mohan was called as a witness and no coercive action was intended. He added that Facebook is not regarded as an accused. There are reports of Facebook being misused to incite communal violence and the panel did not allege any direct complicity by Facebook. The panel wants to discuss ways to fix the problem, he added.