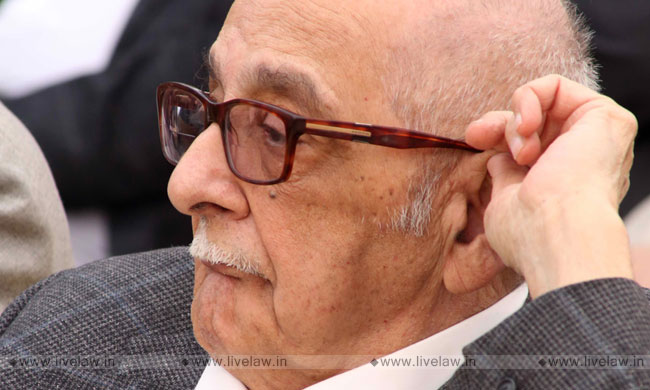 Senior Advocate Fali Nariman has opined that the mediation in Ram Janmabhoomi-Babri Masjid case is highly recommended.""If it is possible, and if all parties are agreeable, then Mediation is not a bad thing. In fact, it is highly recommended. Last year, the UN had passed a Convention for the settlement of all commercial affairs by mediation...Perhaps court-appointed mediation could...

""If it is possible, and if all parties are agreeable, then Mediation is not a bad thing. In fact, it is highly recommended. Last year, the UN had passed a Convention for the settlement of all commercial affairs by mediation...Perhaps court-appointed mediation could work. Looking at the mix we have, I am not sure if it will work. This is not a Hindu state. We have a number of minorities, with the Muslims being the largest" Nariman said in an interview to News 18.

On Confrontation between Executive And Judiciary

"Except for some exceptions here and there, the judiciary has strived to maintain its independence. Sometimes it has succeeded, sometimes not. There may have been instances of confrontation between the Law Minister and the Chief Justice, but this is the sign of a Healthy and vibrant democracy. And I prefer it this way", Nariman said.

In context of the recent CBI controversy, he commented that all governments, and not just the current BJP-led NDA regime, have the same impact on the independence of institutions- "What did the Congress do at the time of the Emergency? Except for bringing in the emergency? They wanted to make Ms. (Indira) Gandhi the queen of India...Majoritarian governments are disaster for us! They only want to establish what they want"

"As per the (NJAC) act, six persons were to decide on the appointments. The scheme placed the Judges themselves in the minority. That can't be done! Besides, there were to be two eminent persons which was not defined anywhere...Although the NJAC did provide a suitable alternative, the Venkatachaliah formula envisaged a judicial commission which would comprise of the Law Minister, the CJI and three senior most judges, and one more person, perhaps the Attorney General. When I appeared in the NJAC matter, I said I will withdraw the petition if this recommendation of the Venkatachaliah Commission is implemented. The formula even allows a reasonable opportunity for opinion from the outside, in addition to the three judges...Personally, I am against a statute. Our Constitution had a vision.The Final interpreter of the Constitution, whether you like it or not, is the Supreme Court- They can of course change their view, from three judges to five to seven judges. But that is why this is the only Constitution Which can keep this country together...", weighed in veteran lawyer Fali S. Nariman.

However, he conceded that even though "the people may not be satisfied with it", "India is stuck with the Collegium at the moment"- "we are stuck with it for now. Some judge may sulk and say we have to right it, but it will continue for now...the NJAC was passed unanimously by the parliament, but it was held that it doesn't matter whether it is passed unanimously or by a majority if it violates the basic structure of the Constitution. And the Basic Structure says that the judiciary shall have the last word!"

In context of the December 12, 2018 resolution of the Collegium to elevate Rajasthan High Court Chief Justice Pradeep Nandrajog and Delhi High Court Chief Justice Rajendra Menon being subsequently overruled with almost complete opaqueness, Mr. Nariman admitted that it was disappointing to him and to Justice Madan B. Lokur (who was a member of the Collegium when the appointment decision was taken and immediately upon whose retirement, it was reversed). But he insisted that no reasons can be assigned in such an event- "You can't denigrate someone like this. These are things which can't be said"

On discussions about the Relations between lawyers and judges, political parties and business houses

"It's a good thing that the public questions the judiciary, the motives, so long as it happens within the bounds of reason...There is still this fear of the criminal contempt jurisdiction. Many advocates have said that it should be abolished, like in the UK. But I am not sure if we are ready for it yet...It is better to let people blow off steam. But on occasion, it also necessary to issue denial. I had suggested having a special registrar in the Supreme Court to look at press cuttings and make denials that a particular news report in a paper is not correct. This is to the detriment of the Supreme Court that there is no such registrar for advertisement. Denying false publicity is important!"

On the four-judges press conference of January 12 last year

"It was an aberration that should never have happened. With these four gentlemen coming out in the public against the Chief Justice, with the judges themselves doing so in the open, it became fair game for everyone to say anything about the judges. That was the primary motive behind the impeachment motion (against former CJ Dipak Misra)!", ventured the Senior Advocate.

"Though not the credibility but the image of the judiciary has taken a beat...Like I have said, If you believe that something wrong is really happening, You have to shoot to kill and not to hurt! Because otherwise, you hurt not the man but the system. And that is what happened here! There were talks of impeachment by some political party. But it all fizzled out. Nobody even attempted the impeachment", he continued.

On CJ Misra's approach towards tackling the controversy, Mr. Nariman advanced, "It is very difficult to prove these things. The court of law requires evidence, for someone to put to oath, to give a document...(CJ Misra's) silence was the best way to handle it. Else there would have been more allegations one after the other"