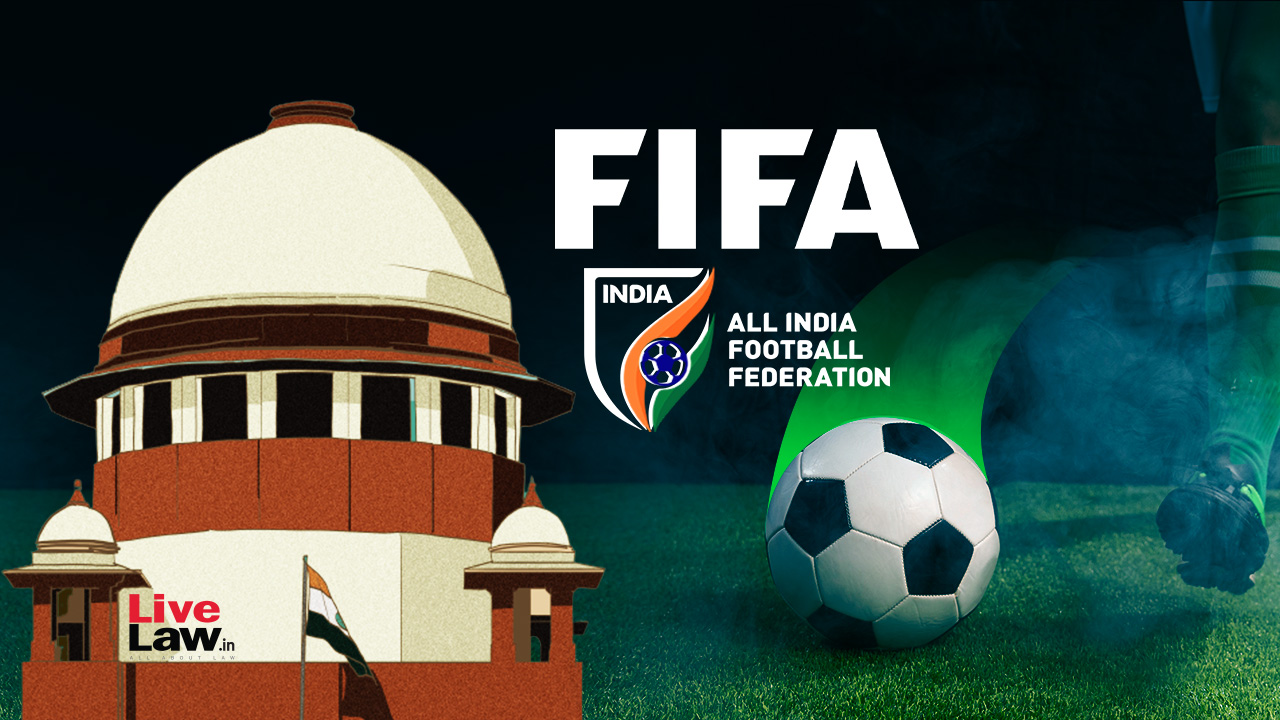 In a significant development in the Indian football, the Supreme Court on Monday passed a direction to terminate the mandate of the Committee of Administrators (CoA) - which has been constituted by the Court- to manage the affairs of the All India Football Federation (AIFF).The Court passed this order in the light of the decision taken by the FIFA to suspend AIFF, which construed the...

In a significant development in the Indian football, the Supreme Court on Monday passed a direction to terminate the mandate of the Committee of Administrators (CoA) - which has been constituted by the Court- to manage the affairs of the All India Football Federation (AIFF).

The Court passed this order in the light of the decision taken by the FIFA to suspend AIFF, which construed the functioning of the CoA as a "third party interference"

The Court modified the earlier directions relating to the CoA and the elections of AIFF so as to facilitate the revocation of the AIFF suspension and to ensure that India can host the Under-17 women's World Cup in October 2022 as scheduled.

The Central Government requested the Supreme Court to end the mandate of the Court-appointed Committee of Administrators(CoA) for the management of the All India Football Federation so as to lift the suspension of AIFF by the FIFA.

The Centre made this request to the Court after the negotiations with the FIFA over last week.

A bench comprising Justices DY Chandrachud and AS Bopanna passed the following directions to modify the earlier orders :

1. The election program is extended by one week.

2. The electoral college will comprise the representatives of member associations of States and Union Territories(35+1).

4. The day to day management of AIFF shall be managed by the AIFF administration led by the AIFF Acting Secretary General, resulting in the termination of the mandate of the CoA to be in charge of the affairs of the AIFF.

5. The Committee of Administrators has already submitted by the draft Constitution together with a tabulated suggestions on August 15. We request Senior Advocate Gopal Sankaranarayanan with Advocate Samar Bansal to assist the Court as the amici curiae.

6. The time for the completion of election which is ending on August 28 shall stand extended by one week.

7. For the purpose of ensuing election, the Executive Committee of AIFF shall comprise of 23 persons (17 persons- inclusive of President, Vice President and Treasurer- who shall be elected by the representatives of 36 member associations from States/UTs) ,6 members shall be drawn from eminent players.

"The above directions are passed in modification of the previous orders to facilitate the revocation of the suspension of AIFF and the holding of the Under 17 world cup in order to ensure that the prestige of the nation and ability of players to participate in international tournament is not affected. In the event that the above process is not taken to its logical conclusions, the court will consider subsequent orders", the Court stated in the order.

The Solicitor General of India Tushar Mehta submitted that the FIFA's suspension of All India Football Federation (AIFF) has two "disastrous" consequences - one, India will lose out of its opportunity to hold the Under-17 women's world cup tournament scheduled in October 2022 and two, Indian players will not be able to participate in international tournaments.

SG further submitted that it was examined if India was being discriminated by the FIFA. But it was found that FIFA follows this uniform policy across the world against "third party interferences".

"FIFA says uniformly across the world they want the management to be under the hands of an elected body or someone elected by an elected body. Third party interference is not acceptable for them. Second concern they had was regarding the electoral list. FIFA feel that only the representatives of the member states be in the electoral college. There are 36 member associations. Our insistence was that players will have to be part of the administration of AIFF. Right now we proposed that 25% of the executive committee will be eminent players. Third thing is the election program, who will conduct it. The returning officers are selected by the Committee of Administrators (CoA) in their sole discretion. The FIFA has the problem with the people selected by the CoA to be there. So, the same people who are selected as the returning officers by the CoA be deemed to have been selected by the Court. Next concern is that the draft Constitution is not yet ready", the SG said.

The SG suggested that the Secretary General, who has been elected by the member bodies, can handle the affairs of AIFF till the elected body takes over and Senior Advocate Gopal Sankaranarayanan, who was representing the CoA, can continue to assist the Court as an amicus curiae.

Ex-Indian football team captain Bhaichung Bhutia filed an intervention application in the Supreme Court supporting the CoA proposal to give 50% representation for eminent players in the electoral college.

Advocate Raghent Basant, appearing for Bhutia, took objection to the earlier comments made by the Solicitor General that Bhutia might be used as a handle by someone. Basant submitted that Bhutia's concern is to remove the "vested interests" from football administration. "I have captained India for 7 years, 100+matches. With vested interests, there's no chance for players like me to part of the administration", he said.

He urged that the Supreme Court should stick to its orders despite the FIFA's objections, as the court interventions are in the larger interests of sports reforms. However, when the bench asked should the Court assert its authority in the wake of the chance of India losing its chance to host the U-17 world cup, Basant replied :

"India hosted the under-17 men's World Cup 4 years ago. Did the Indian football improve after that?  India is ranked 104th in the world. Even if you ask as small child, he will tell that there is no chance of India qualifying for the FIFA world cup. I would rather have reforms than have a tournament hosted. I would rather have India qualify for the World Cup", Bhutia submitted.

"Do we assert our authority at the cost of the tournament coming to India?", Justice Chandrachud asked at this juncture.

Senior Advocate Gopal Sankaranarayanan, appearing for the CoA, submitted at the outset that the CoA has no intention to "cling on". He took objection to the tone and tenor of the FIFA letters, which suggested that the Court's orders are third party interferences.

"CoA is an extension of the Court. To say that this is the third party intervention...this is the tone of every letters sent by FIFA.Prior August 2022, your lordships noted the importance of World Cup; and said that let's hold elections. Every person here agreed to it. Some people went to FIFA and told them there was no agreement. FIFA then writes and says we do not know who this third party (CoA)is", Sankaranarayanan submitted.

He also said it is unacceptable if the FIFA wants to review the Constitution even if it is finalised by the Supreme Court. He also brought to the attention of the Court certain forensic audit reports regarding AIFF which suggest siphoning off of the funds. In response to this, Solicitor General submitted that the Sports Ministry is ready to look into the issue of misappropriation of funds and a criminal prosecution can be carried out under the monitoring of the Supreme Court.

Senior Advocate Rahul Mehra (who filed the petition in the Delhi High Court seeking reconstitution of the AIFF as per the National Sports Code) submitted that the disbanding of the CoA can have an impact on other sports federations like Indian Hockey Federation, Indian Olympic Association, which have also been placed under the CoAs.

Mehra submitted that the current situation has been created by the ousted President Praful Patel and his people and urged the Court to "come down heavily on them".

Senior Advocate Kapil Sibal, representing former AIFF President Praful Patel, submitted that he has no interest in holding any position in the AIFF and added that he was endorsing whatever the Solicitor General said. He said that due to the bar on persons who have held the post for three terms, which was introduced in the byelaws by him, he cannot be the President anymore.

On the Court's query whether Patel will step down from FIFA, Sibal also submitted that he is an elected member of the FIFA. In response, Sankaranarayanan said that Patel's election was by virtue of his position in the AIFF and when he is no longer the AIFF President, he can't be in FIFA council. Refuting this, Sibal submitted that he was elected to FIFA and was not nominated.

On the previous hearing day, the Solicitor General of India had told the Court that the Centre was having active discussions with the FIFA to resolve the matter. Following that, the Court had adjourned the hearing to August 22, after observing that the Centre should take proactive measures to lift the suspension of AIFF and to ensure that India gets to host the Under 17 women's World Cup tournament as scheduled.

On August, 16, the FIFA suspended the All India Football Federation (AIFF) with immediate effect citing "undue influence from third parties".

In a press statement issued on August 16, the FIFA said that the suspension will be revoked once the order appointing the Committee of Administrators to assume the powers of the AIFF Executive Committee is repealed.

It may be noted that the Committee of Administrators was constituted under the orders of the Supreme Court in 2017 after the Delhi High Court set aside the election of former Civil Aviation Minister Praful Patel as the AIFF President. It had also appointed former Chief Election Commissioner SY Quraishi and former Indian football team captain Bhaskar Ganguly as a committee of administrators to bring the AIFF's constitution in sync with the National Sports Code. In May 2022, the Supreme Court had appointed former SC judge Justice AR Dave as the head of the COA.

On August 3, 2022, the Apex Court passed directions for conducting elections for the AIFF Executive Committee ahead of the hosting of the U-17 women's world cup by India.

After that order, the Committee of Administrators moved a contempt petition alleging that Praful Patel was liasoning with FIFA to undermine the hosting of the U-17 women's world cup.

The Supreme Court's orders came in the appeals filed by the All India Football Federation against the Delhi High Court's judgment in the case filed by Senior Advocate Rahul Mehta, who sought reconstitution of the sports body as per the National Sports Code with democratic elections.