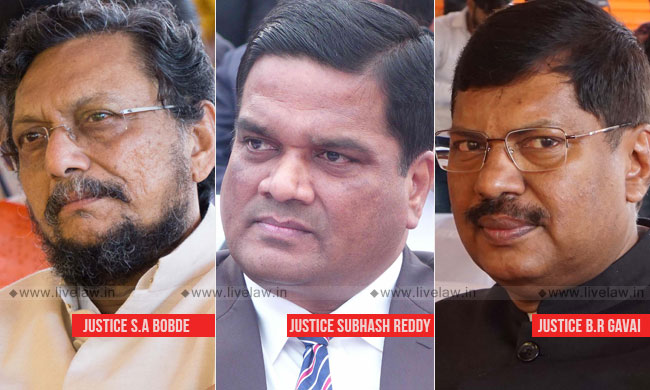 The Supreme Court, last month, directed the Rajasthan Government to reconsider two decade old proposal of the then Chief Justice of Rajasthan High Court to upgrade 16 posts of its Private Secretaries as Senior Private Secretaries which it had declined without even forwarding the same to the Governor.

Interpreting the term 'approval' in the proviso to Article 229(2) of the Constitution of India, the bench comprising Justice SA Bobde, Justice R. Subhash Reddy and Justice BR Gavai observed that the only ground on which the Government may refuse such proposal of the Chief Justice is that the proposal is not in conformity with the pay scales in civil services.

The Chief Justice of Rajasthan High Court made a recommendation to upgrade 16 posts of Private Secretaries as Senior Private Secretaries in the pay scale of Rs.3450-5000/- with the special pay of Rs.350/- from the pay scale of Rs.2500-4250/-. The Government, in April 1998, wrote a letter by which it declined to accept the upgradation and the recommendations of the Chief Justice were never sent to the Governor.

Later in 2004, the High Court allowing the writ petition filed by the affected Private Secretaries, held that the decision of the Chief Justice to upgrade the posts is part of the power to increase or reduce the strength of the staff attached to the High Court and there was no requirement of approval of the Governor under the proviso to Article 229(2) of the Constitution of India. The High Court set aside the letter declining to accept the decision of the Chief Justice of Rajasthan High Court and directed that the letter cannot be an impediment in exercise of such authority. The result is that the High Court has held that the approval of the government to the proposal is not necessary.

In appeal filed by the State [State of Rajasthan vs. Shri Ramesh Chandra Mundra], the bench observed that the High Court is correct to the extent it held that the decision to upgrade any post can be taken only by the Chief Justice and the said decision cannot be questioned by any authority. But the matter clearly had financial implications which would require the approval of the Government of the State, the bench added.

This provision reads as follows:

Provided that the rules made under this clause shall, so far as they relate to salaries, allowances, leave or pensions, require the approval of the Governor of the State.

Meaning, scope and ambit the word "approval" appearing in the proviso 229(2)

The bench then discussed the meaning, scope and ambit the word "approval" appearing in the proviso 229(2) of the Constitution of India. Referring to Constitutional Assembly Debates in this regard, the bench said that the real object of the proviso is to ensure that the pay-scales between officers of constitutional courts and civil services are kept equal. It said:

"In the present case, this purpose has not been violated. It is not open to the government to reject a proposal which is not in violation of this object. In other words, the only ground on which the Government may refuse the proposal of the Chief Justice is that the proposal is not in conformity with the pay scales in civil services."

The Court further went on to observe that the Independence of Judiciary takes within its sweep independence of the individual Judges in relation to their appointments, tenure, payment of salaries and also non-removal except by way of impeachment. The bench made these observations in the order: