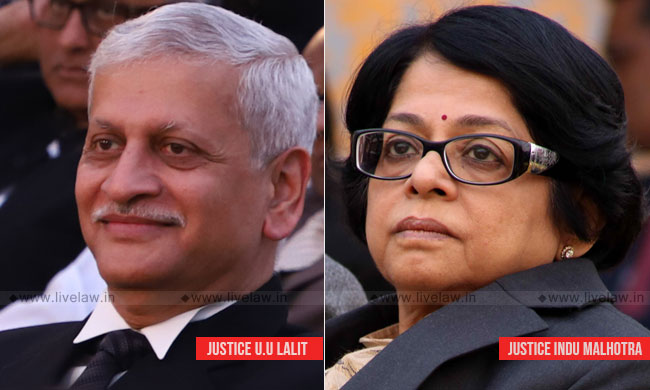 Which scheme would apply to applications seeking compassionate appointments when the original scheme under which appointment on compassionate grounds could be made, was substituted by one under which only ex gratia payment would be made over to the dependants? The Supreme Court has referred this question to a larger bench. The bench comprising Justice Uday Umesh Lalit and Justice...

The bench comprising Justice Uday Umesh Lalit and Justice Indu Malhotra, while hearing an appeal by State Bank of India, noticed that there are two set of apex court judgments which deals with the issue. One set of judgments hold that here is no vested right to have the matter considered under the former scheme and the governing scheme would be one which was in force when the applications came up for consideration. The other set hold that the governing scheme would be the former scheme and any subsequent that came into force after the claim was raised would not be applicable.

The bank, in its appeal, had placed reliance on the following two judgments of the Apex Court.

In StateBank of India and another vs. Raj Kumar, a two judge bench of the Supreme Court held that, where the earlier scheme is abolished and the new scheme which replaces it specifically provides that all pending applications will be considered only in terms of the new scheme, then the new scheme alone will apply. The judgment further held that since compassionate appointment is a concession and not a right, the employer may wind up the scheme or modify the scheme at any time depending upon its policies, financial capacity and availability of posts.

Relying on the above judgment, another two judge bench of the Apex Court, in MGB Gramin Bank vs. Chakrawarti Singh, observed that a candidate cannot claim that his case is to be considered as per the scheme existing on the date the cause of action had arisen i.e. death of the incumbent on the post

On the other hand, the applicant relied on Canara vs. M. Mahesh Kumar, in which the apex court had upheld a High Court judgment that had directed the employer bank to consider the application seeking compassionate appointment as per the Scheme then in existence.

While referring the matter to larger bench, the court said: "All the aforesaid three decisions as well as one in Jaspal Kaur were rendered by Benches of two Hon'ble Judges of this Court.. The principles emanating from these two lines of decisions, in our considered view are not consistent and do not reconcile. The matter therefore requires consideration by a larger Bench of at least three Hon'ble Judges of this Court."