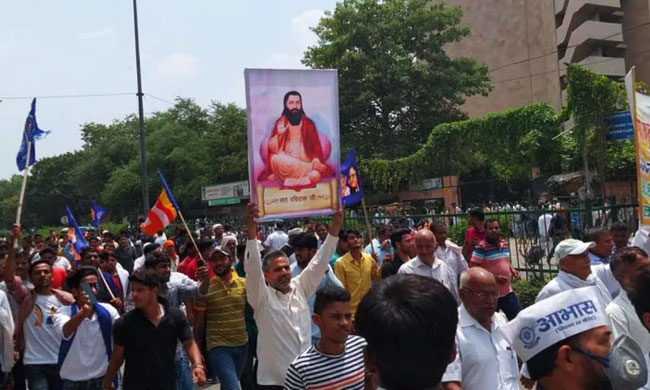 Allowing the reconstruction of the Sant Ravidas Temple in Delhi, the Supreme Court on Monday acceded to the Centre's proposal to assign 400 sq. m. of land at the same site in Thuglakabad where the temple had stood before it was razed down based on apex court's directions. Assuming the task of the reconstruction, the Centre conveyed that honouring the belief and the faith of the...

Allowing the reconstruction of the Sant Ravidas Temple in Delhi, the Supreme Court on Monday acceded to the Centre's proposal to assign 400 sq. m. of land at the same site in Thuglakabad where the temple had stood before it was razed down based on apex court's directions.

Assuming the task of the reconstruction, the Centre conveyed that honouring the belief and the faith of the worshippers, twice the earlier size of the property, being 200 sq. m., that had been decided to be dedicated to the Temple.

The bench headed by Justice Arun Mishra required the Centre to set-up within 6 weeks a committee to overlook the reconstruction, to release on tendering of personal bond all those arrested in the protests against the Temple's demolition.

The Court has also ordered that there should be no business activities in and around the region devoted to the Temple.

The Court passed the order in a writ petition seeking permission to reconstruct the temple filed by Ashok Tanwar (former MP from Sirsa and present President HPCC) and Pradeep Jain Aditya (former Jhansi MP and Minister of State in 2009 UPA cabinet).

On Friday, Attorney General K K Venugopal had told the Supreme Court that it was willing to offer 200 square meters of plot in the same site where the temple had existed before its demolition.

Earlier, the bench had urged the parties to work out an amicable solution by exlploring alternate site for reconstruction.

It was the bench consisting of Justices Arun Mishra and M R Shah which had ordered on August 9 the demolition of the temple located at Jahapanah forest area in national capital. Following the directions of the SC, the Delhi Development Authority razed the temple on August 10, leading to massive Dalit protests in Delhi demanding its reconstruction.

The demolition of the temple led to massive Dalit protests. Following this, the writ petition was filed stating that the temple was a site of historic and cultural significance for the followers of Guru Ravidas, and that its demolition has resulted in the infringement of fundamental right to worship guaranteed under Article 25 of the Constitution.