High Court's Power Under Article 226/227 To Interfere With Arbitration Process Needs To Be Exercised In Exceptional Rarity: Supreme Court 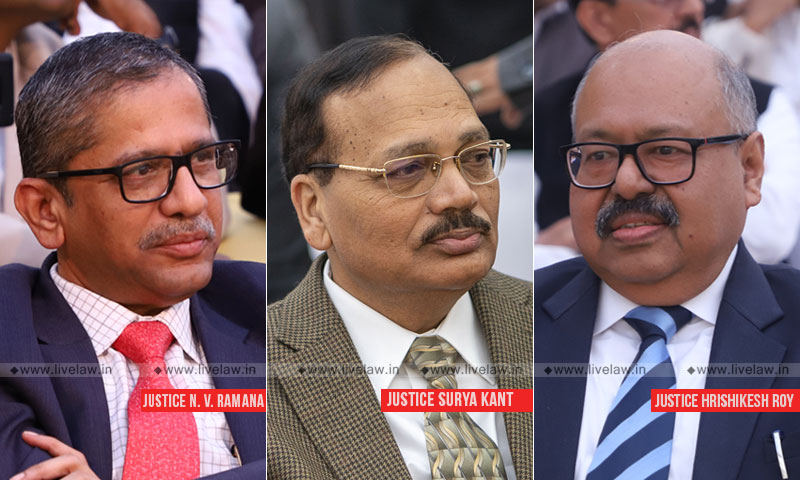 The Supreme Court has observed that the power of the High Courts under Article 226/227 of the Constitution of India to interfere with an arbitration process needs to be exercised in exceptional rarity, wherein one party is left remediless under the statute or a clear 'bad faith' shown by one of the parties. If the Courts are allowed to interfere with the arbitral process beyond the ambit...

The Supreme Court has observed that the power of the High Courts under Article 226/227 of the Constitution of India to interfere with an arbitration process needs to be exercised in exceptional rarity, wherein one party is left remediless under the statute or a clear 'bad faith' shown by one of the parties.

If the Courts are allowed to interfere with the arbitral process beyond the ambit of the enactment, then the efficiency of the process will be diminished, the bench comprising Justices NV Ramana, Surya Kant and Hrishikesh Roy observed while setting aside a judgment of Gujarat High Court allowing a writ petition challenging the jurisdiction of the sole arbitrator. The issue considered by the bench was whether the arbitral process could be interfered under Article 226/227 of the Constitution, and under what circumstance?

To answer this, the bench noted that the Arbitration Act is a code in itself  and the non-obstante clause in Section 5 of the Act is provided to uphold the intention of the legislature as provided in the Preamble to adopt UNCITRAL Model Law and Rules, to reduce excessive judicial interference which is not contemplated under the Arbitration Act. The court observed:

The Arbitration Act itself gives various procedures and forums to challenge the appointment of an arbitrator. The framework clearly portrays an intention to address most of the issues within the ambit of the Act itself, without there being scope for any extra statutory mechanism to provide just and fair solutions. Any party can enter into an arbitration agreement for resolving any disputes capable of being arbitrable. Parties, while entering into such agreements, need to fulfill the basic ingredients provided under Section 7 of the Arbitration Act. Arbitration being a creature of contract, gives a flexible framework for the parties to agree for their own procedure with minimalistic stipulations under the Arbitration Act. If parties fail to refer a matter to arbitration or to appoint an arbitrator in accordance with the procedure agreed by them, then a party can take recourse for court assistance under Section 8 or 11 of the Arbitration Act.

In this case, the bench observed that the order passed by the arbitrator under Section 16(2) of the Arbitration Act was challenged through a petition under Article 226/227 of the Indian Constitution. It said:

In the usual course, the Arbitration Act provides for a mechanism of challenge under Section 34. The opening phase of Section 34 reads as 'Recourse to a Court against an arbitral award may be made only by an application for setting aside such award in accordance with sub-section (2) and subsection (3)'. The use of term 'only' as occurring under the provision serves two purposes of making the enactment a complete code and lay down the procedure.

It is therefore, prudent for a Judge to not exercise discretion to allow judicial interference beyond the procedure established under the enactment. This power needs to be exercised in exceptional rarity, wherein one party is left remediless under the statute or a clear 'bad faith' shown by one of the parties. This high standard set by this Court is in terms of the legislative intention to make the arbitration fair and efficient.

The court observed that there was no exceptional circumstance or 'bad faith' on the part of the Appellant, to invoke the remedy under Article 227 of the Constitution. It added:

"No doubt the ambit of Article 227 is broad and pervasive, however, the High Court should not have used its inherent power to interject the arbitral process at this stage. It is brought to our notice that subsequent to the impugned order of the sole arbitrator, a final award was rendered by him on merits, which is challenged by the Respondent No. 1 in a separate Section 34 application, which is pending."

While setting aside the High Court judgment, the bench said:

"Section 16 of the Arbitration Act, necessarily mandates that the issue of jurisdiction must be dealt first by the tribunal, before the Court examines the same under Section 34. Respondent No. 1 is therefore not left remediless, and has statutorily been provided a chance of appeal.. In view of the above reasoning, we are of the considered opinion that the High Court erred in utilizing its discretionary power available under Articles 226 and 227 of the Constitution herein. Thus, the appeal is allowed and the impugned Order of the High Court is set aside."