"I Apologise From My Heart": Advocate Yatin Oza's Tells SC As SC Decides To Wait For Gujarat HC Order 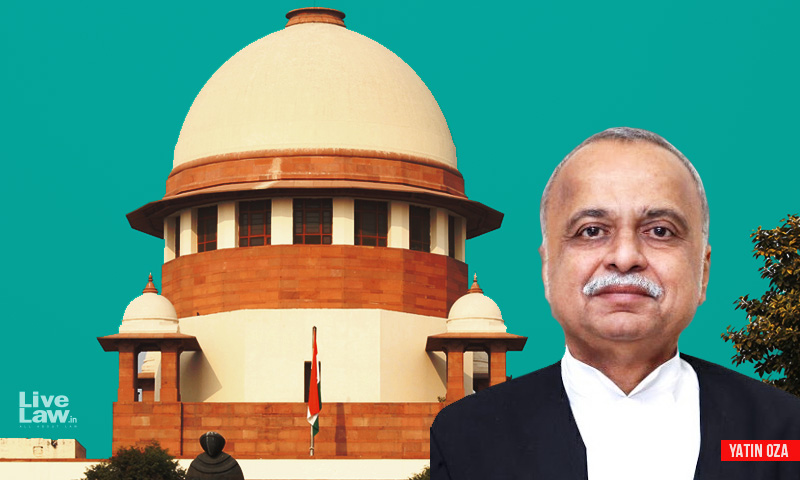 x
"I know my words have caused great harm. I apologize from my heart. It is not a paper apology"?: Yatin Oza Told SC

The Supreme Court on Wednesday deferred hearing in the petition filed by advocate Yatin Oza against Gujarat High Court's decision to strip him off his designation as senior.

Given the fact that the High Court is scheduled to pass orders on September 17, the Supreme Court Bench comprising of Justices SK Kaul, Aniruddha Bose and Krishna Murari deemed it fit to wait and see what the High Court decides.

Stating that Oza might have "more hands to place his arguments on" after the High Court gives a verdict, the Bench said it would hear the matter in appeal thereafter. It was thus averred that subsequent to the punishment decided by the High Court, an appeal maybe filed accordingly.

Upon the suggestion of Oza's counsels, senior advocates Abhishek Manu Singhvi and Arvind Datar, the Supreme Court granted Oza liberty to serve a copy of the petition that will be moved before it to the respondents beforehand in order to enable them to come prepared with a response. Therefore, so long as a petition is moved soon after High Court's decision, Oza may provide that to the respondents who will then file a reply, without the need to issue a notice on the next date, thereby saving time and allowing the matter to be heard.

Giving due consideration to the amount of time this will require, Supreme Court has now listed the matter for September 29.

As the hearing commenced today, Justice Kaul stated that this was an unfortunate situation and expressed his concern regarding the same.

"What concerns us is that this is not an isolated incident. On various occasions he has used opportunities to, I'll use the term, 'brow beat' the Court", remarked Justice Kaul. He went on to say that Mr. Oza had only made things worse for himself.

Abhishek Manu Singhvi tried to appeal to the Court regarding the sensitivity of the issue and informed that Oza has tendered an apology on numerous occasions for his words. With regard to recalling of his designation as senior, Singhvi argued that the decision was harsh. "You know the matter of the gown is a death sentence for any lawyer", he urged.

Though the Bench expressed its awareness regarding the plight of a lawyer in this position, it was asserted that the power to grant and withdraw the designation vested with the High Court.

Agreeing with the same, Singhvi sought to argue the matter and bring out 12 points. However, Justice Kaul was of the opinion that it would be better to await the decision of the High Court.

After the Order was passed, Singhvi apprised the Judges that Oza had apologized on a number of occasions. "However, it was said that I haven't apologized and even if I did it would not be accepted. Then it was said when I apologized that I didn't argue on merit", he added.

Senior Advocate Shekhar Naphade on behalf of Oza also voiced his support and said that he had served well for many years, and though he had slight temperamental issues, Oza has got a heart of gold.

"I know my words have caused great harm. I apologize from my heart. It is not a paper apology", he clarified.

"Let's see what we can evolve, all I can say is the consequences will hopefully be minimal", responded Justice Kaul.

During a live conference on Facebook in July, attended by various journalists, Oza alleged that the HC registry was following corrupt practices, and that the cases of only the rich and powerful were being listed and heard.

Taking strong exception to such "irresponsible, sensational and intemperate" remarks, the High Court had taken contempt proceedings against him observing that Oza had, with frivolous grounds and unverified facts, targeted the High Court Registry and had questioned the very credibility of High Court Administration.

Being stripped of his designation as a senior, Oza moved the Top Court, seeking that the Full Court notification be set aside and Rule 26 of the HC Rules be declared as ultra vires.

In Supreme Court, on August 6, Oza offered to tender an unconditional apology to the High Court for his remarks against it. Taking note of this, the Apex Court deferred the hearing of his petition after having asked the High Court to consider Oza's representation and apply its mind to the issue.

Oza had told Supreme Court that he was offering an unconditional apology for his remarks, and said, "I seek forgiveness. I offer my unconditional apology. I did so before the Full bench in Gujarat HC also. In my career, I have never done something like this. I became a Senior at 44."

However, the Full Court of Gujarat High Court decided to reject his apology as his words have caused "irreparable damage" to the Judicial Institution.

"The Full Court is convinced and firmly believes that the apology tendered by Mr. Oza at the earlier in point of time and the apology tendered today is completely lacking in bonafides and is no more than a paper apology," resolved the High Court in a meeting held on August 23.

The rejection of Oza's "so-called" unqualified apology was made on consideration of totality of the facts and circumstances stating that "remorse expressed is a tool to escape the Consequences of his misconduct".

"The so-called unqualified unequivocal apology is a clever and disguised attempt to refurbish his image and get out of a tight situation by expressing a few words of regret for his conduct and repeatedly try to blame the so-called circumstances which led to it," remarked the Full Court. It was added that if Mr. Oza's apology were to be accepted, it would be a failure on the part of the High Court to perform one of its "essential duties solemnly entrusted to it by the Constitution and the people."

The Court further observed that the remarks made by Mr. Oza during his Live Session were not aberrations in the "heat of moment", nor were they "emotional outbursts".

"Why does Mr. Oza always expect the High Court to show magnanimity and pardon him for his misconducts? Why cannot Mr. Oza exercise restraint and behave in a manner befitting a designated Senior Counsel? A very well articulated and conscious attack mounted on the Institution and that too for no good cause or reason, should not be overlooked, pardoned or ignored. If such an attack is not dealt with firmly, it will affect the honour and prestige of the highest Court of the State," further averred the Full Court.