Termination Of Workmen On The Ground That Their Appointment Is Illegal Will Amount To Retrenchment: SC [Read Order] 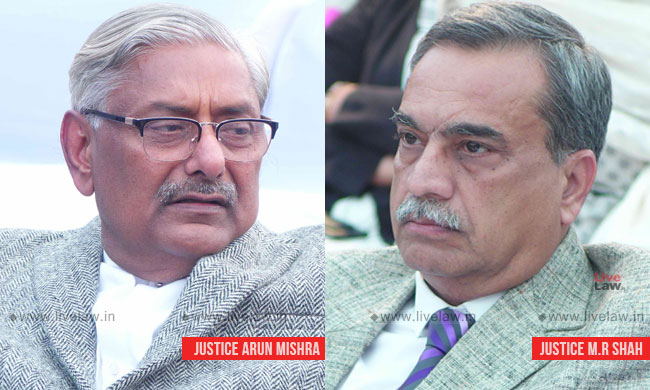 x
Even though the Supreme Court observed that termination of workmen on the ground that their appointments were illegal will amount to 'retrenchment', it did not set aside the Patna HC Full bench judgment which held otherwise.

The Supreme Court has observed that Section 25F of the Industrial Disputes Act will be applicable even in cases of workmen terminated on the ground that their appointment was illegal. The bench comprising Justice Arun Mishra and Justice MR Shah observed that "invalid appointment" is not covered in the Exceptions under section 2 (OO) of the Industrial Disputes Act. Retrenchment...

The Supreme Court has observed that Section 25F of the Industrial Disputes Act will be applicable even in cases of workmen terminated on the ground that their appointment was illegal.

The bench comprising Justice Arun Mishra and Justice MR Shah observed that "invalid appointment" is not covered in the Exceptions under section 2 (OO) of the Industrial Disputes Act.

As per Section 2(00) of the ID Act,  "Retrenchment‟ means the termination by the employer of the service of a workman for any reason whatsoever, otherwise than as a punishment inflicted by way of disciplinary action. The same section provides that the following does not mean 'retrenchment':

Section 25F lists the conditions precedent to retrenchment of workmen.

The Industrial Reference made before the Labour court was whether the termination of the workers named therein by the Bihar State Scheduled Caste Corporation Ltd is valid or not and whether they should be reinstated in service and given compensation.

It was contended before the labour court that the services of the workmen were terminated violating Section 25F of the ID Act and that since they had worked for about 240 days in a year, their retrenchment is illegal and, therefore, they are entitled to reinstatement with full back wages.

The labour court held that since the workers had the continuous service of one year, their services ought to have been terminated only after complying with the procedures laid-down in Section 25F of the ID Act and, therefore, their retrenchment, which is violative of Section 25F of the ID Act, was illegal and liable to be set aside. However, it did not award reinstatement with back wages, but it limited the relief to compensation equivalent to 3.33 years‟ salary, including admissible allowance, on the basis of last pay and allowances drawn by the employees concerned.

Both the workmen and the management challenged this order before the Patna High Court. The case was referred to a full bench of the High Court.

The question considered by the full bench was whether the termination of the service of a workman, whose initial appointment was held to be void and non est, can be stated to be retrenchment as defined under Section 2(oo) of the ID Act, so as to compel the employer to comply with the provisions under Section 25F of the ID Act merely because the workman had the continuous service for one year? The Court observed:

"We are of the view that it cannot be stated that their termination of service is retrenchment and they are entitled to compensation. If their appointment itself is null and void, there is no necessity for issuing even a termination order and they cannot be reinstated in service also. Section 25G of the ID Act deals with "the procedure for retrenchment‟. Only junior-most workman can be retrenched on the principle of "first come last go‟. If after invalid appointment juniors are appointed validly, Section 25G cannot be applied. That also shows that termination of service on the ground that the initial appointment itself was declared void stands on a different footing and it cannot be retrenchment. Section 25H of the ID Act deals with "re-employment of retrenched workmen‟. Since the appellant was not validly appointed, the question of giving him re-employment does not arise. It shows that the termination on the ground that the appointment itself is ab initio void will not amount to retrenchment as defined in Section 2(oo) of the ID Act so as to attract the procedure under Section 25F.

The High Court answered the reference holding that, if the initial appointment is illegal and void, the termination of service of the workmen on that ground will not be retrenchment and they will not be entitled to any relief, on the principle that those who come through back door shall go through the back door.

Though the High Court held that the workmen are not entitled to reinstatement with full backwages as their initial appointment itself was void, it observed that the compensation awarded by the Labour Court shall not be recovered from the workmen.

Supreme Court Dismisses Appeal Even Though It Holds Otherwise

Challenging the refusal of the High Court to permit recovery of compensation from workmen, the management approached the Apex Court and contended that the appointment of workmen was illegal as it was invalid and thus Section 25F of the Industrial Disputes Act was not applicable. Dismissing the appeal, the bench observed:

"We are not able to accept the aforesaid submission as invalid appointment is not covered in the Exceptions under section 2 (OO) of the ID Act. Thus, Section 25F of the ID Act is clearly applicable and is attracted.. Consequently, the retrenchment has rightly been held to be illegal."

In effect, the Supreme Court has held that section 25F of the ID Act is applicable even if the appointment is illegal/invalid, but dismissed the appeal against the High Court judgment which held that it is not applicable.

It looks like, because the management was in appeal, the SC assumed that the High Court in the impugned judgment held that the retrenchment was illegal. This is evident from the observation made by the SC in the order that "the retrenchment has rightly been held to be illegal".

The High court, in fact, as noted above, had held that the termination in this case, is not retrenchment so as to attract Section 25F of ID Act.