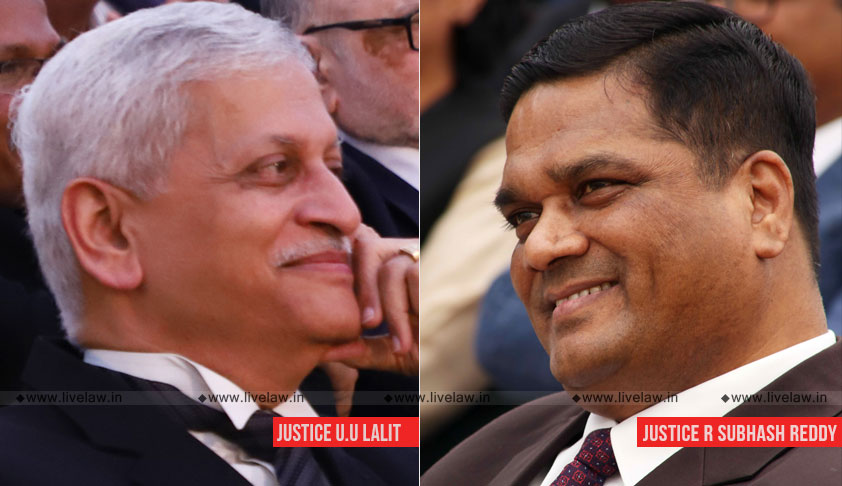 x
SC found fault with the insurer for applying depreciation on the original purchase value from date of purchase, instead of the sum insured for the post policy period.

In a significant judgment on insurance law, the Supreme Court held that an insurer cannot deviate from the 'sum insured' in the policy, and can apply depreciation only on the sum insured, that too only for the post-policy period and not for any period prior to it.The judgment was delivered by a bench of Justices U U Lalit and R Subash Reddy in the case Sumit Kumar Saha vs Reliance...

In a significant judgment on insurance law, the Supreme Court held that an insurer cannot deviate from the 'sum insured' in the policy, and can apply depreciation only on the sum insured, that too only for the post-policy period and not for any period prior to it.

The judgment was delivered by a bench of Justices U U Lalit and R Subash Reddy in the case Sumit Kumar Saha vs Reliance General Insurance Co Ltd, an appeal challenging the order of National Consumer Redressal Commission.

In 2010, the excavator got damaged in fire. The insurance surveyor estimated loss on 'constructive total loss basis'. The surveyor applied depreciation at 32.5% for the period of three years and three months from the date of purchase of the excavator.

The appellant claimed that it was entitled to the sum insured of the excavator, being a case of total loss and approached the State Consumer Commission, against the settlement offered by insurer based on surveyor's estimate.

The State Commission found that the insurer erred in applying depreciation of 32.5% on the original purchase value, instead of the sum insured for the policy term. The commission also held that the insurance surveyor's finding on under-insurance was not based on sum insured but on the depreciated value of original purchase cost. Therefore, the State Commission ordered the grant of Rs.41,90,940, which is the depreciated value of sum insured for the year 2009-10. Compensation of Rs.1 lakh was also awarded.

The National Commission however partly reversed the State Commission's order, and directed that appellant was entitled to Rs. 34,42,500, which was the depreciated value arrived at by the surveyor on the basis of original purchase value.

Not a case of Under Insurance

While considering the appeal, the SC rejected the arguments of the insurer that there was under-insurance. The insurer relied on the decision Sikka Papers Ltd v National Insurance Co Ltd, which held that in cases of under-insurance, insurance Company is entitled to proportionate deduction representing the proportion of undervaluation.

The Court found there was no under-insurance in the case at hand.

The Court held that it was not open for the parties of the contract to dispute that the value of the subject matter was different from the value declared and accepted by them at the time of entering into contract. The Court also noted that this was not a case where insurer alleges any fraud, misrepresentation or non-disclosure of material fact by the insured.

"if both the parties had agreed and arrived at an understanding, which understanding was otherwise not vitiated by any misrepresentation, fraud or coercion, the parties must be held bound by stipulation of such figure", the bench held, following the SC decision Dharmendra Goel vs Oriental Insurance Co Ltd.

Depreciation to be applied on sum insured for post policy period and not for original purchase value.

The Court found that the insurer considered depreciation not only for the post policy period, but for the period from date of purchase.It held that the surveyor could not have calculated depreciation for a period prior to the date of policy or contract.

"He could have undertaken the exercise post the date of policy to assess the real value of the insured property as on the date when the fire actually took place. And for such purposes, the assessment must start with the amount described as "sum insured" on the day when the contract was entered into.", the bench observed.

"It was not open to the Surveyor or to the Insurance Company to disregard the figure stipulated as 'sum insured'. The loss had to be assessed in the present case, keeping said figure in mind"

The bench went on to hold :

"except in cases where the agreement on part of the Insurance Company is brought about by fraud, coercion or misrepresentation or cases where principle of uberrima fide is attracted, the parties are bound by stipulation of a particular figure as sum insured. Therefore, the surveyor and the Insurance Company were not justified in any way in  questioning and disregarding the amount of "sum insured". Further depreciation, if any, can always be computed keeping the figure of "sum insured" in mind. The starting figure, therefore, in this case had to be the figure which was stipulated as "sum insured".

The appellant was held entitled to Rs.41,90,940, after depreciation of 10% applied on the sum insured.