'Dissent In Democracy Is Vital' : Bombay High Court Stays Enforcement Of IT Rules 'Code Of Ethics' Against Digital Media 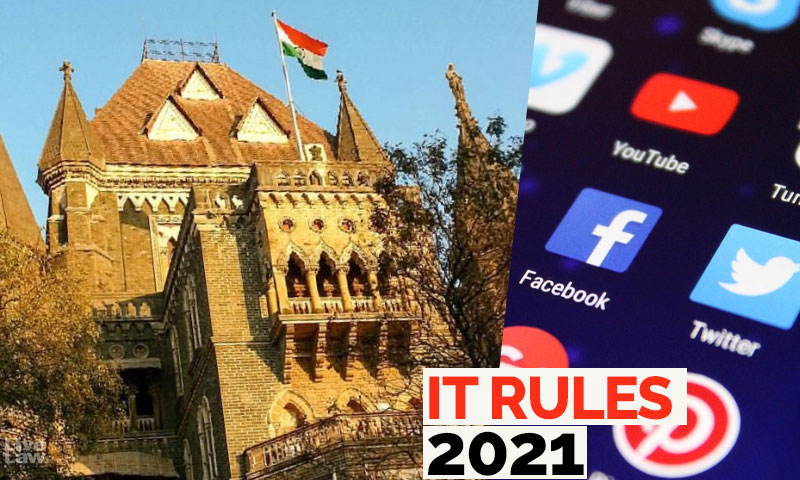 The Bombay High Court on Saturday stayed Rules 9(1) and 9(3) of the Information Technology (Guidelines For Intermediaries And Digital Media Ethics Code) Rules,2021, which mandate that digital news media and online publishers should adhere to the "Code of Ethics" prescribed by the Rules.The High Court prima facie observed that the said provisions infringe the fundamental right to freedom...

The Bombay High Court on Saturday stayed Rules 9(1) and 9(3) of the Information Technology (Guidelines For Intermediaries And Digital Media Ethics Code) Rules,2021, which mandate that digital news media and online publishers should adhere to the "Code of Ethics" prescribed by the Rules.

The High Court prima facie observed that the said provisions infringe the fundamental right to freedom of speech under Article 19(1)(a) and also go against the substantive provisions of the Information Technology Act 2002.

"In so far as Rule 9 is concerned, we have found it prima facie to be an intrusion of the petitioners rights under Article 19(1)(a). We have also held that it goes beyond the substantive law. Therefore we have stayed clauses 9(1) and 9(3). The rule is not stayed in its entirety", the Chief Justice Dipankar Dutta said while pronouncing the order. This means that Rule 9(2) - which says that a publisher will be liable for consequential action for violating any other law in force - is in operation while Rules 9(1) and 9(3) remain stayed.

The "Code of Ethics" under the Rules applied the "Norms of Journalistic Conduct of the Press Council of India" and the "Programme Code under the Cable TV(Network) Regulation Act 1995" to digital media.

After the pronouncement of the order, Additional Solicitor General Anil Singh requested for a stay of the order. However the bench turned down the ASG's prayer.

As regards Rule 14, which deals with the constitution of an inter-departmental committee as an oversight mechanism over digital media, the bench noted that the said committee is yet to be constituted. Therefore, the bench opined that there is no "immediate urgency". However, the Court has given liberty to the petitioners to raise their grievances against Rule 14, as and when the inter-departmental committee for oversight is constituted.

As regards Rule 16, which deals with the power of the Centre to block access to content, the bench noted that the said provision was similar to Rule 9 of the 2009 Intermediary Rules. Since the petitioners have not expressed any grievance with respect to Rule 9 of the 2009 Rules, the bench said that no case for stay was made out as regards Rule 16.

The bench also refused to stay Rule 7, which deals with penalties for intermediaries for violating the Rules.

Dissent in democracy is vital

Dissent is vital for the functioning of any healthy democracy, however, the new 2021 IT Rules can have a chilling effect on freedom of speech, with a journalist or news publisher having to think twice before criticising the State administration, the Court said in its order.

"Dissent in democracy is vital. It is, however, the checks and balances that make a democracy work. There can be no two opinions that a healthy democracy is one which has developed on criticism and acceptance of contra views. Opinion based on criticism reinforces its acceptance in a democratic society. For proper administration of the State, it is healthy to invite criticism of all those who are in public service for the nation to have a structured growth but with the 2021 Rules in place, one would have to think twice before criticising any such personality, even if the writer/editor/publisher may have good reasons to do so without resorting to defamation and without inviting action under any other provision of law."

The court held that with the Rules operating in their present form, a journalist or news organisation exposes himself to punishment even without transgressing the boundaries of reasonable restriction under Article 19(2) fo the Constitution of India.

"Allowing the operation of the 2021 Rules in its form and substance to operate would result in the writer/editor/publisher standing the risk of being punished and sanctioned, should the inter-departmental committee be not in favour of criticism of any public figure. It is, therefore, quite possible that the writer/editor/publisher on contravention of the provisions of clause (1) of Rule 9 of 2021 Rules, but without even transgressing the boundaries set by clause (2) of Article 19 of the Constitution, may expose himself/itself to punishment/sanction under the 2021 Rules."

The bench upheld the arguments of the petitioners to prima facie hold that IT Rules can have a chilling effect on freedom speech and go beyond the scope of the IT Act.

"The indeterminate and wide terms of the Rules bring about a chilling effect qua the right of freedom of speech and expression of writers/editors/publishers because they can be hauled up for anything if such committee so wishes. The 2021 Rules are, thus, manifestly unreasonable and go beyond the IT Act, its aims and provisions.

A democracy would thrive only if the people of India regulate their conduct in accordance with the preambular promise that they took while giving to themselves the Constitution. Liberty of thought is one of such promises. Exercising this liberty, expressions take shape.

Should at least a part of Rule 9 of the 2021 Rules be not interdicted even at the interim stage, it would generate a pernicious As it is, the constant fear of being hauled up for contravention of the Code of Ethics is a distinct possibility now.

People would be starved of the liberty of thought and feel suffocated to exercise their right of freedom of speech and expression, if they are made to live in present times of content regulation on the internet with the Code of Ethics hanging over their head as the Sword of Damocles. This regime would run clearly contrary to the well-recognised Constitutional ethos and principles.

"We are prima facie of the opinion that Rule 9 does not conform to the statute, namely, of the Information Technology Act as also it is an intrusion into the fundamental rights guaranteed under Article 19(1)(a) of the Constitution of the publishers," the bench observed.

Rules on digital media beyond the substantive power of Information Technology Act.

The Court also made a prima facie observation that the Rules relating to digital media are beyond the substantive powers of delegated legislation given to the Union Government by the Information Technology Act.

"In our opinion, neither clause (z) nor clause (zg) of sub-section (2) of Section 87 under which the 2021 Rules are framed would confer any power on the Central Government to frame a provision in the nature of Rule 9. Thus, in our prima facie opinion, Rule 9 appears to be ultra vires the provisions of the IT Act being beyond the delegated power"

"This apart, Rule 9 also prima facie appears to be infringing the constitutional guarantee of Freedom of Speech and Expression as conferred by Article 19(1)(a) in subjecting the publishers of newsand current affairs content and publishers of online curated content subject to action under the statutory regime of the Press Council Act and the Cable TV Network(Regulation) Act, which provides for an independent mechanism for any violation of the provisions of such legislation. We prima facie find much substance in the contentions as urged on behalf of the petitioner that such transgression of powers occupied by different legislations cannot be disrupted by a subordinate legislation".

On Friday, the court reserved its orders for interim relief in the petition.

During the hearing, the bench questioned how guidelines for 'Norms of Journalistic Conduct' under the Press Council of India Act were made enforceable as "Code of Ethics" under the new IT Rules.

"The Press Council Code of Ethics are just guidelines, how can you put it to such an exalted status that they will be liable to action?... Unless you have the liberty to thought, how can you express yourself?. You are restricting the liberty of thought. But according to your Rules, it appears a minor infraction makes a person liable for action," the Chief Justice observed.

Senior Advocate Darius Khambata for 'The Leaflet' contended that the Rules, are the most "draconian" in present times and can have a "chilling effect" on free speech. The portal seeks a declaration that the rules are ultra vires so far as they apply to news publishers.

Rules 14 deals with an oversight mechanism and an Inter-Departmental Commiittee (Ministry Level), to ensure strict adherence to the code of ethics. Rule 16 deals with the blocking of information in case of an emergency.

Advocate Abhay Nevagi, appearing for the other petitioner, Nikhil Wagle, argued that the Rules provide "unfettered powers to the executive to direct the intermediaries (Twitter, Facebook…) to delete or modify or block the relevant content and information generated, transmitted, received, stored or hosted in their computer resource for public access" and seeks that the Rules to be declared arbitrary, illegal, irrational, unreasonable and violative of a citizen's fundamental rights under Article 14, Articles 19(1)(a), 19(1)(g) and Article 21 of the Constitution of India.

Opposing the prayer for interim reliefs ASG Anil Singh argued that any relief may have a spiralling effect and "result in spread of fake news and legally prohibited content."

The ASG also informed the Court that the Interdepartmental Committee, which is the third tier of oversight mechanism, is yet to be formed.

"It is also submitted that an interim stay on the implementation or operation of Part-III of the Rules would render the legally established institutional framework for digital media publishers inoperative, leading to an environment of impunity, and concomitant spread of fake news and legally prohibited content. It is further submitted that such a situation may not only cause harm to the citizen's right to correct information, but also impact the efforts being made by various stakeholders towards development of a safe online news media ecosystem," the Union's affidavit read.

With respect to publishers of news and current affairs content, Part-lll of the Rules has three broad features – a Code of Ethics which requires adherence, by the digital news publishers, to the Norms of Journalistic Conduct of the Press Council of India under the Press Council Act, 1978; Programme Code under section 5 of the Cable Television Networks Regulation) Act, 1995; and prohibits them from publishing content which is prohibited under any law.

A three-tier Grievance Redressal Mechanism, for redressal of grievance related to violation of the Code of Ethics, with two levels of self-regulation- Level I being the publisher, and Level II being the Self Regulatory Body and the third level being the Oversight Mechanism under the Ministry of Information & Broadcasting; and furnishing of information by publishers to the Govemment, and periodic disclosure of grievances received by them.