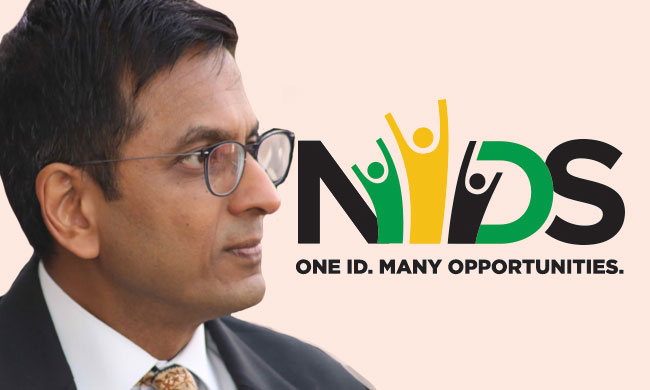 x
"Dr Chandrachud J, in my respectful view, demonstrated a greater sensitivity to the issues of privacy and freedom that is not as evident in the judgments of the majority", said Chief Justice of Jamaica

The Supreme Court of Jamaica has extensively followed Justice DY Chandrachud's dissenting opinion in Aadhaar case to declare that its National Identification and Registration Act is unconstitutional, null, void and of no legal effect.The Government of Jamaica had developed a National Identification System (NIDS),to provide a 'comprehensive and secure structure to enable the capture and...

The Supreme Court of Jamaica has extensively followed Justice DY Chandrachud's dissenting opinion in Aadhaar case to declare that its National Identification and Registration Act is unconstitutional, null, void and of no legal effect.

The Government of Jamaica had developed a National Identification System (NIDS),to provide a 'comprehensive and secure structure to enable the capture and storage of personal identity information for citizens and persons ordinarily resident in Jamaica.' National Identification and Registration Act was enacted in 2017, though not yet brought in force.

Julian Jay Robinson ,a Member of Parliament and General Secretary of the People's National Party which forms the opposition in the Jamaican Parliament had approached the Supreme Court challenging the Act.

While the Chief Justice held that the compulsory taking of biographical and biometric data is a violation of privacy rights under the Jamaican Charter, Justice Batts in his concurring opinion observed that with this scheme, 'the danger of a "big brother state" or as the Supreme Court of India called it, a "surveillance state" is real'. Justice Palmer Hamilton, in a brief concurring opinion, observed that unbridled accessibility by public and private sectors is untenable and unconstitutional and would need requisite safeguards in place to ensure that the constitutional rights of the citizens are not violated.

Both the Chief Justice and Justice Batts quoted extensively from Aadhaar judgment delivered by the Constitution bench of the Supreme Court of India, particularly endorsing the dissenting opinion delivered by Justice Chandrachud in the case.

"From reading the judgments in this case Dr Chandrachud J, in my respectful view, demonstrated a greater sensitivity to the issues of privacy and freedom that is not as evident in the judgments of the majority or the other judges who delivered concurring judgments. His Lordship had a clear-eyed view of the dangers of a state or anyone having control over one's personal information and generally I preferred his approach to the issue over that of the other judges."

"Unlike the majority in Puttaswamy (September 26, 2018) who seemed to have taken a rather benign view of this aspect of the matter Dr Chandrachud J destroyed the notion that merely because similar or identical information is already in the possession of the state that in and of itself makes taking of such information again legitimate. His Lordship clearly understood the implication of collecting biographical information, combining it with biometric then automating the process with supporting algorithms."

"Respectfully, the majority in Puttaswamy (September 26, 2018) did not seem to have a full understanding of this and its implications in the say that has been demonstrated by Dr Chandrachud."

Notwithstanding the far reaching decision of the majority (a detailed summary of which is at paragraphs 446 to 448 of the majority judgment), I am inclined towards the view of Dr. Dhananjaya Y Chandrachud J in his dissenting judgment. That learned Judge recognised that technology has caused our institutions of governance to face new challenges.

The Constitution of India, unlike ours, has no express statement of the right to privacy. Their Judges implied the right. Also, unlike ours, their Constitution allows for "fair just and reasonable" exceptions to the rights guaranteed. These differences notwithstanding, the decision of the majority as well as the reasoning of the minority, are of great assistance and relevance.

I respectfully wish to adopt as my own, the learned Judge summarised the overall constitutional failings of the Aadhaar scheme

This learned Judge, in his dissent, also decided that the proportionality test failed because the Act allowed private entities to use Aadhaar numbers. This he said would lead to commercial exploitation of the personal data and profiling without consent. Profiling can be used to predict market behaviour and preferences and even influence the choice for political office. These are contrary to privacy protection norms. Susceptibility to communal exploitation renders the relevant provisions arbitrary. The failure to define "services and benefits" also was unreasonable and disproportionate.

Why NIRA is Unconstitutional

According to CJ Sykes, the scheme is unconstitutional for the following reasons.

Justice Batts held that the NIRA is unconstitutional null and void insofar as it is intended to make compulsory the taking of biometric and other data so as to provide a national identification number and card for every citizen and resident of Jamaica. The involuntary nature of the policy infringes guaranteed constitutional rights, the judge said. Following are his conclusion: