Virtual Courts Are The New Symbol And New Image Of the Indian Judiciary: Justice DY Chandrachud 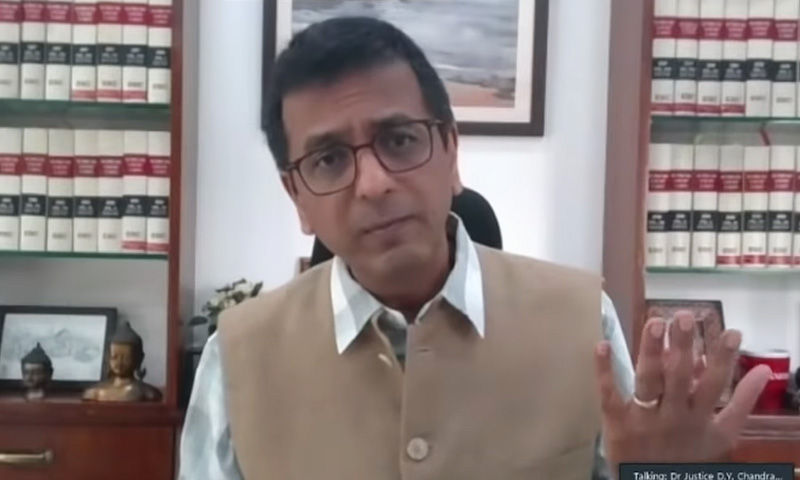 "One of the very disturbing aspects (of the criminal justice system) is the delay in the communication of order of courts to prison establishments, including bails", Justice D. Y. Chandrachud has said.He was speaking at the inauguration of the Model Virtual Courtrooms in the Districts of Angul and Nayagarh in Orissa, e-Custody Certificate System and Automated Email service for dissemination...

"One of the very disturbing aspects (of the criminal justice system) is the delay in the communication of order of courts to prison establishments, including bails", Justice D. Y. Chandrachud has said.

He was speaking at the inauguration of the Model Virtual Courtrooms in the Districts of Angul and Nayagarh in Orissa, e-Custody Certificate System and Automated Email service for dissemination of case information, organised by the Orissa High Court.

"I recently passed an order quashing preventive detention under the National Security Act solely on the ground that there was an unexplained delay at various stages in the communication of the orders, communication of the representations of the detenue. I do believe that in today's times when we are benefited by ICT, all these tools at our command should be put to use, whether at the judiciary, the administrative wing or the legislative wing of the State. It is up to us to now utilise these initiatives to further the need to provide expeditious justice. These initiatives must be understood in the context of the criminal justice administration and the significant challenges that we face", he continued.

"According to the National Prisons Portal, around five lakh inmates are inside prisons as of date. We are in the process of connecting prisons with courts so that every single inmate, undertrial and convict, can be tracked and the respective courts can be alerted. Electronic communications between courts and jails will be established. I do believe that the initiative of a custody certificate can be suitably tweaked and furthered by providing and enhancing this communication between the courts and the prison establishments and the prison administration in general, whether it be in the nature of premature release of convicts or grant of furlough or grant of parole", told Justice Chandrachud.

Aryan Khan's case has again brought to the fore the issue of delay in release of a prisoner from jail, despite obtaining bail order and completing surety formalities. In this case, the delay in Khan's release was caused due to certain timing regulations in the Mumbai Central Prison at Arthur Road.

Virtual Courts
Justice Chandrachud described the virtual courts as the "new symbol and new image of the Indian judiciary". Asserting that technology is to make life simpler and not complicated and to respond to every stakeholder in the system, Justice Chandrachud expressed that virtual courts considerably speed up trials but, more importantly, provide dignity for all human beings, all stakeholders who come in contact with the judicial system. "Because by these initiatives, we send a message that we value the time of our citizens", he said.

Incorporation of technology to remediate huge pendency of criminal cases
The judge indicated that there are 2 crore 95 lakh criminal cases which are pending in the district judiciary of the country, of which 77.5% cases are more than one year old. "We know as judges that the major reasons for delay in disposal of criminal cases is the fact that the accused remain absconding, particularly after bail is granted, and secondly, due to non-appearance of official witnesses during the course of the criminal trial for recording evidence. This is the common part pattern across the country", he told.

"I believe we have answers in technology. One of the key initiatives of the E-committee of the Supreme Court is to ensure that we are able to actually track and monitor which are those cases where the accused are absconding. And we should be able to track them at the level of the police station, at the level of every district so that the superintendents of the police are at a glance able to know which are the cases which are pending because the accused is absconding under the various police stations under their command. We can escalate it to the level of the DGP and IGP of the state. For delays being caused by non-appearance of official witnesses, time has now come to make recording of evidence of official witnesses through video conferencing platforms as a rule as opposed to being an exception", he said.

Digitisation of records and E-filing
"We are in the process of now commencing a very ambitious scheme of digitising court records across the country. We had set up a broad-based committee of High Court judges as well as experts from the private sector and governmental institutions. A detailed SOP has now been prepared which has now been unveiled for all the chief justices. We have chosen certain High Courts as pilot high courts for the implementation of the pilot project", told Justice Chandrachud.

"Another initiative is to have a nationwide consultant for taking the message forward of digitisation of court records across the country. But the e-filing of cases filed by the state government should be looked at from the perspective of digitisation. Now that we are commencing digitisation, we are digitising legacy records, previous records. Five years down the lane, we should not be required to digitise records all over again. That we can avoid by ensuring that we start e-filing of cases in tandem with digitisation of old records. Because it is only when we e-file cases today that we will obviate the need for digitisation in the future. I have recently written to all the chief justices in this regard and Chief Justice S. Muralidhar (of the Orissa High Court) has already responded by implementing it", continued the judge.

E-Seva Kendras and training of members of the bar
"There is a major digital divide in India. We cannot really ignore the fact that persons who access our services do not necessarily have an awareness or access to technology. The common litigants do not necessarily have access to technology which we have as judges. Lawyers again, who are critical to the success of the mission, do not, in many instances, have access to technology which we have. For the simple reason that lawyers perform services in aid of society across the spectrum, earning a small pittance of a fee for a junior member of the bar, we have to ensure that we bridge the digital divide for the members of the bar", observed Justice Chandachud.

He was of the view that the same can be accomplished, firstly, by providing them resources, which can be provided under a one-stop facility of providing E-Seva Kendras in every establishment of the district court- "This E-Seva Kendra should be really within the heart of the district court establishment where it is easily accessible to all citizens who wish to access our services under the E-courts facility".

"The second aspect is the training of the members of the bar. I believe now it is time that the Judicial Academies across the country must not merely look at their function as training judges, be it judges of the High Court or those of the district judiciary, but also take upon in a proactive way the task of collaborating with the bar associations for training members of the bar. The member human resources of the E-committee of the Supreme Court are taking an active initiative in ensuring that we pursue this mission of training members of the bar at the smallest district court establishment at the taluka level so that we achieve this goal within 365 days beginning from January 1, 2022", continued Justice Chandrachud.

Interoperable Criminal Justice System
"The interoperable criminal justice system is a key element in the e-courts project. The ICJS has aimed at integrating the crime and criminal tracking network systems, the CCTNS, the E courts and the E prisons databases so that the CCTNS would share the FIR and charge sheet data in electronic form with the E courts application and likewise the E courts would share the CNR number to the CCTNS through the ICJS. Further updates of the case could be made available through the open APIs", shared Justice Chandrachud.

The judge told that the E-court services mobile apps are available on android and iOS and they can be used by police officers everywhere to track cases and create a portfolio of cases and get important alerts. Senior police officers can use the app for tracking important cases under their jurisdiction. Similarly, the prison officials can utilise the App.

Next, he told, "We all know as judges that the district judiciary maintains manual registers and it takes an enormous amount of time. It is a stressful exercise when the date for inspection arises and his lordship or her ladyship goes to the district court for the purpose of inspection. I think we must now modernise. Inspection must be done in electronic form. We seek to replace the manual registers with model electronic registers. Otherwise, we know how much stress it causes to our district judges. Time has come for us to launch all forms of inspection in electronic mode".

Further, he urged, "There is a wealth of data which is available on the National Judicial Data Grid. I would request all administrative judges of Orissa High Court to use NJDG data for generation of reports so that they can monitor what is happening in their districts under their command".

Finally, Justice Chandrachud discussed another initiative of the E-committee that is the linking of land records with the case information software- "In a large number of cases which come up before the district courts, one of the key issues is whether a particular plot of land has already been encumbered, what is the nature of encumbrance on that land. The linking of land records with the CIS has already been completed in Maharashtra and Uttar Pradesh. This will ensure that the land records are linked in tandem with the CIS".