One Can't Rely Only On The State To Determine Truth; Speaking Truth To Power Both A Citizen's Right & Duty: Justice Chandrachud 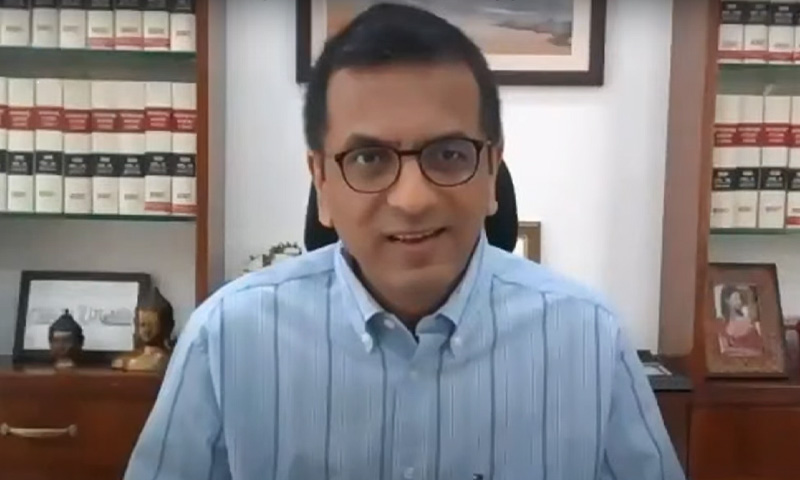 The exercise of the right to speak truth to power by the citizens is integral for the functioning of a modern democracy, said Supreme Court judge Justice DY Chandrachud at a virtual event on Saturday.He was delivering a talk on the topic "Speaking Truth to Power : Citizens and the Law" as part of the 6th MC Chagla Memorial Online Lecture."Speaking truth to power" refers to an act by a speaker...

The exercise of the right to speak truth to power by the citizens is integral for the functioning of a modern democracy, said Supreme Court judge Justice DY Chandrachud at a virtual event on Saturday.

He was delivering a talk on the topic "Speaking Truth to Power : Citizens and the Law" as part of the 6th MC Chagla Memorial Online Lecture.

"Speaking truth to power" refers to an act by a speaker to use truth to criticize someone who is more powerful, Justice Chandrachud said.  This act aims to wield the power to truth to against power. The assumption is that truth will counter-act power and obviate a predisposition to tyranny.

Quoting philosopher Hanna Arendt, Justice Chandrachud said that totalitarian governments are associated with a "constant reliance on falsehoods in order to establish dominance".

He highlighted that truth is integral to the functioning of a modern democracy.  "Democracy and truth go hand in hand. Democracy needs truth to survive", he said. Since democracies are spaces of reasons, truth is important, as reasons cannot be based on falsehoods.  Truth is also important to instill public faith in democracy.

Truth also create a shared public memory on which foundations of nation can be established. In this regard, he said that the courts can also play the role of recording public truth with their ability to document information from all parties involved after due process has been followed.

"It can't be said that State will not indulge in falsehood for political reasons even in democracies. The role of US in Vietnam war did not see the daylight until the Pentagon papers were published. In context of COVID, we see that there is an increasing trend of countries across the world trying to manipulate data. Hence, one cannot only rely on the state to determine the truth", Justice Chandrachud said.

He therefore called for more vigilance and participation by the citizens. Quoting Noam Chomsky, he said that public intellectuals have a duty to expose the lies of the state.

"As responsible citizens, we should put these truth providers through intense scrutiny and questioning to convince ourselves of the veracity of the claims made by them. It is equally important for those making truth claims to be transparent", he said.

"What can we as citizens of India do. First thing is to strengthen our public institutions. As citizens, we must strive to ensure that we have a press which is free from influence of any kind, be it political or economic, which can provide information in an unbiased manner.

Similarly, schools and universities need to be supported to ensure that they create an atmosphere where students can learn to differentiate truth from falsehood and develope a temperament to question power.

Secondly, we must not only acknowledge the plurality of opinions in a country as diverse as India but celebrate this plurality. This allows open space for more opinions.

We also need to protect the integrity of our elections seeing elections not only as a right but also as a duty. To do this, we need to ensure all citizens are given basic education to realize the value of their vote", he said.

"As citizens of a democracy, we need to commit ourselves to the search for truth as a key aspiration of our society", he stressed.

The judge added that by 'citizens', he does not mean just the elite and the privilege class alone. In this context, he reminded that in India since women, Dalits and others belonging to marginalised communities did not traditionally enjoy power, their opinions were not conferred with the status of truth.

"Since they did not enjoy the freedom to express their opinion, their thoughts were confined, crippled and caged. After abolition of the British Raj, the truth became the belief and opinion of upper caste men", he said.

In his speech lasting for nearly 45 minutes, Justice Chandrachud touched upon issues relating to manipulation of information through social media and the rise in the phenomenon of fake-news.

The idea of "market place of ideas" faces test in the post-truth world, where citizens are finding it difficult to identify truth, he said. Human beings have a tendency to get attracted to sensational news, which are often based on falsehoods. Studies show lies dominated in social media like Twitter.

"People not being concerned about the truth is another phenomenon in the post-truth world. There is a contest between 'our truth' vs 'your truth' and tendency to ignore truth which is not in alignment with one's perception of truth", he commented.

The algorithms and systems of social media corporations often amplify existing polarizations. Truth might get drowned out by large amounts of information to the contrary.

"We live in a post-truth world. Social media platforms are responsible... but citizens are also responsible. We incline towards echo chambers and don't like opposing beliefs... we live in a world that is increasingly divided along social, economic and religious lines," he said.

"We only read newspapers that align with our beliefs... we ignore books written by people who do not belong to our stream... we mute the TV when someone has a different opinion... we do not truly care about the 'truth' as much as we do about being 'right'," Justice Chandrachud added.

While there have been calls by several experts to regulate social media, Justice Chandrachud said that as a member of judiciary, it is not fit for him to make a comment on it.

Justice Chandrachud recalled legendary jurist MC Chagla as someone who consistently upheld the rule of law and advocated for civil liberties. He recounted the heroic opposition made by MC Chagla against the imposition of emergency.