Children in Child-Care Institutions Are Not There for Reasons of Their Own, Rehabilitation Must Be Prioritised: Justice Ravindra Bhat 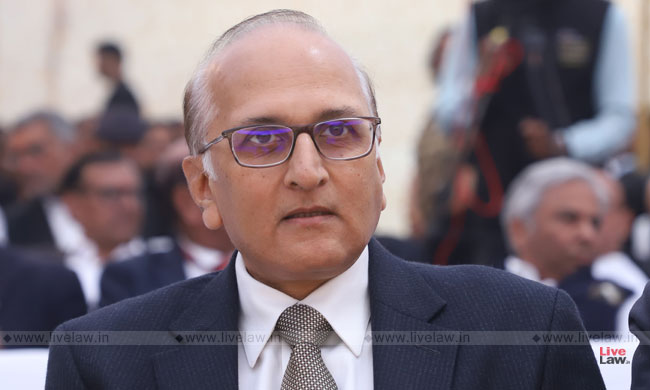 "When I started my law career, I had not thought that I would be where I am. When I am travelling and the car stops at the signal and I look at children begging for money, I think that I could quite easily have been him. That is the feeling we have to eliminate, bring in that sense of inclusiveness", Justice Ravindra Bhat has expressed."All the children in the Child-Care Institutions are...

"When I started my law career, I had not thought that I would be where I am. When I am travelling and the car stops at the signal and I look at children begging for money, I think that I could quite easily have been him. That is the feeling we have to eliminate, bring in that sense of inclusiveness", Justice Ravindra Bhat has expressed.

"All the children in the Child-Care Institutions are not there for reasons of their own."

"Even a child in conflict with the law is a mirror of what we are. The background they come from and the behaviour that he is in for is a reflection of what he has seen. If I say that all that matters is me and my family, you will have a selfish, greedy and avaricious child. If a child comes from a family where he sees that petty crime is the order of the day, he will follow it. You can't find fault with the child. It is our job to restore the child with the rest of the world", he said.

The Supreme Court judge was speaking at the Fourth Round Table Conference on the Implementation of Juvenile Justice System in the Union Territories of J&K & Ladakh. The conference was organised by the Juvenile Justice Committee, Supreme Court of India, Juvenile Justice Committee, High Court of J&K and Ladakh in collaboration with the Jammu and Kashmir government and supported by UNICEF.
Speaking of the Covid pandemic repercussions, Justice Bhat mentioned that there have been alarming press reports which have revealed serious rights violations with a spike in child sexual abuse cases, trafficking, forced labour etc.

"The challenge which Covid put to us was whether children should be institutionalised or sent back to the family? One short answer was we could send them back wherever families exit. But that 'one size fits all' approach did not speak to me because several children came from very violent and negligent families and that likelihood of being trafficked was very real", he continued.

Justice Bhat flagged as the first area of concern the problem of exclusion- "There are children who are not part of any child care institutions, juvenile institutions or observation homes. During the pandemic, all our institutions were sensitised to the issue of children becoming orphans. Now, there are court orders and policies. The idea of having a census or survey throughout the state to look at the situation of children is an excellent idea. Please come out with a paper on this, take suggestions from all departments and stakeholders and carry this out. We did carry out one kind of census when I was in Delhi and I consulted the concerned department. They took a census of the children who were left out of the education system. It was startling that some 50,000 odd children were completely out of the education system! In Delhi, we have migrant labour. There were linkages- the primary school system was different from the secondary school system. So we created linkages. But please carry out some census to determine where the children are and what needs to be done".
He stated that the second aspect would be training of people working in child care institutions.
"One of the objectives of the JJ Act is the rehabilitation of the juveniles in conflict with the law. Any effective delivery can only be through trained personnel, that is, if you have the personnel there. I am aware that the social welfare department has its own challenges for the state government as well as the Centre especially when it comes to funding etc, but I would repeatedly emphasise that it is important to flag and create a system for the prompt filling of vacancies in all child care institutions, in all observation homes, children's home etc."
"There needs to be a realistic appraisal of the homes and their requirement of manpower. In one state, I found even though there was the sanction of posts, the tendency was to contract them out and outsource them and give them by way of contractual appointments. In my opinion, that is not the correct approach if you are looking at investing in the future and ensuring that these children become as participating citizens of this country as all of us. We must make sure that all of those who are posted are our people and not just people who are there till the contract comes to an end. The government is the guardian, it has the responsibility and ownership of these institutions, these children are as much our children", urged the judge.
He emphasised the importance of teachers, providing equitable quality education to all. He opined that health and sports are very important in addition to education for children in these institutions, pointing out mental health problems aggravated by prolonged lockdown, inability to socialise between children, lack of access to education itself, lack of digital infrastructure.

"We cannot always expect poor people to have smartphones. These are problems that have to be faced at the structural level. If you are going to see non-physical and virtual schools for a prolonged period, it is important that we have policies on it", he said.

Justice Bhat was of the view that the institutional frameworks must make it a priority to carry out anti-trafficking measures through local community safety networks, stringent verification and vetting and awareness drives.
Justice Bhat addressed the aspect of legal aid, indicating that the Legal Services Authorities Act mentions children as those who are entitled to legal aid- "Presently, the NALSA framework predominantly provides legal aid for the benefit of adults. In 2008, the Supreme Court had issued directions for the improvement of the juvenile justice system, suggesting that the State legal services authority may direct the district authority to establish a panel of defenders in every Juvenile Justice Board, to prepare a list of young lawyers who are willing to work in a child-friendly manner. There is a need to focus our energies on sensitisation of not just only the police or other parts of the administration and judicial officers but also these legal aid lawyers in their approach under the Juvenile Justice Act".
Continuing, he discussed, "One more area I want you to consider is what happens after the final stage of the repatriation of a child. For instance, there is a concern that the evidence by the child of the offence committed, of child labour etc, becomes difficult to procure during the trial for the purpose of punishing the accused. There is also follow-up which has to take place after repatriations, both with the child and the parents or the guardian. This calls for a strong monitoring mechanism. Under section 107 of the JJ Act, there is a provision for a child welfare police officer. He is supposed to be someone not below the rank of their assistant sub-inspector with special training at every police station. And you have at the district level someone who is of the rank of the deputy superintendent of police. There also is to be an effective coordinating mechanism, for not just children in conflict with the law, but also for monitoring on a day to day basis if there are instances in other institutions such as children homes and observation homes".
Justice Bhat pointed out that a bi-annual audit of the implementation of the JJ Act, "which the law mandated after the Supreme Court judgement", will undoubtedly help in the process and provide assistance for the decision making.

"There is a need to gather a clearer picture of these challenges and their unique effect in J and K and Ladakh. One more challenge that you have is remoteness that many areas are faced with accurate empirical data needs to be gathered", he added.

The Chief Secretary of the government of J & K being present at the event, Justice Bhat indicated to him that while the UTs have 22 Juvenile Justice Boards, yet there are only 8 sanctioned posts for the presiding officer of the Juvenile Justice Boards. "Chief Secretary sir, you would be aware that the Juvenile Justice Board's presiding officers are magistrates. I believe in the state of Jammu and Kashmir, every day there are something like 50 cases assigned to every judicial magistrate in each court across the state. That being the case, if the task of also handling the juvenile issues is thrust upon him on her, the burden becomes impossible to handle. It is then not possible to discharge the duties under the Act. The presiding member of the board is not only a magistrate in the sense that he would have the power of judicial enquiry or overseeing trials, but secondly, he has the oversight of the manning of the child care institutions, observation homes etc and the duty to oversee rehabilitation. If we are to see any meaningful implementation of the Act, we have to have these presiding members. So I would urge you, sir, to take this with the most immediate priority and to see that the needful is done for all the rest of the districts".
Justice Bhat also insisted on the need for orientation to police and armed forces personnel, being the first point of contact for a juvenile in conflict with law or a child who has been lost or kidnapped- "They would be handling the children, so what are the steps to take? There can be a blue book. And not just an SOP, there is a need for training sessions repeatedly, for refresher courses".
TagsJuvenile Justice Act #Justice S. Ravindra Bhat Children In Conflict With Law Union Territory of Jammu and Kashmir Juvenile Justice Committee Child Care Institutions #Repatriation Legal aid Juvenile Justice Boards (JJBs) Supreme Court COVID 19
Next Story
Similar Posts
+ View more
Law Firms
+ More