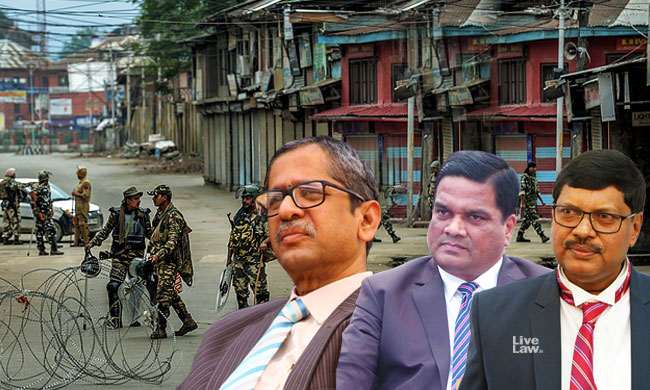 Hearing in Enakshi Ganguly's case :"The report submitted is...we don't want to say...but have all allegations been appreciated? Has there been an application of the mind?", wondered Justice N. V. Ramana on Tuesday in connection with the report submitted by the Juvenile Justice Committee of the Jammu & Kashmir High Court on the detention of children in the state. The court was...

"The report submitted is...we don't want to say...but have all allegations been appreciated? Has there been an application of the mind?", wondered Justice N. V. Ramana on Tuesday in connection with the report submitted by the Juvenile Justice Committee of the Jammu & Kashmir High Court on the detention of children in the state.

The court was hearing Senior Advocate Huzefa Ahmadi, for petitioner Enakshi Ganguly, who expressed the concern that the report of the JJC, filed on the order of the Supreme Court, has merely quoted the report of the DGP.

"The allegations were based on newspaper reports. And the report only contains the reply by the DGP. His denial, his version", noted the bench.

"I have a modification on principle. We are dealing with an unusual situation there...there is this statutory committee, which comprises, not of private persons, but of 4 Hon'ble judges of the High Court. I would be failing in my duty if I don't highlight this- whether we should trust the Committee and let the law take it course, or would we sit in appeal over the Committee? The petition was filed on September 16 under Article 32, it was asserted on behalf of the petitioner that it is not possible to move the J & K HC. In a report called for by this court, the Chief Justice of the HC clarified that the HC has been functioning regularly from day 1, how many cases have been filed and how many have been disposed off, and the petitioner's assertion was shown to be false. Then on September 20, this court ordered the JJC to submit its report...Under normal circumstances, in a petition before this court, would Your Lordships intervene on a false assertion? It would set a wrong precedent in my submission. Your Lordships entertaining this petition would prima facie mean the HC is not working. It would be a serious prejudice against the judiciary of the state. Let everything be gone into by this Committee. Let the petition not remain...there is an Act in force and the law will take over", advanced Solicitor General Tushar Mehta.

"These are four hon'ble judges who only had limited time to submit the report. We should trust them and let law takes it course", he insisted.

Agreeing with the stance of the state of J & K, Attorney General K. K. Venugopal also said that the JJC had a time constraint in filing its report and that the court may go back to the Committee for a more elaborate consideration and analysis of all facts and details.

"The position is much better today. The directions of this court (regarding the exercise to be undertaken by the JJC) could not be complied with because of time constraints. There is no other reason. We are not questioning your jurisdiction...('It is about judicial propriety', the bench noted')...But I have three submissions- Let there not be sent the message that the HC is not functioning. That could be the motive of some of these petitions...Please don't allow any of us to sit in appeal over the JJC, that something was considered or something was not considered. Please ask the Committee to submit its report only to satisfy Your Lordships' conscience under 32...No novel approach. The JJC has 4 judges who know the exact situation there. This is not a lis between private parties...", urged the SG.

The bench had also earlier objected to the use of the term 'abdication' by Mr. Ahmadi in connection with the act of the JJC- "the dictionary meaning of 'abdication' is failure to carry out the duty. The order (of another bench headed by Chief Justice Ranjan Gogoi) was passed and within 2 days, the report was submitted...what is the mechanism for these judges? Nobody will come forth to give evidence...they have to make do with whatever material is available to them...please withdraw the word..."

"This is not fact-finding committee, but one under the Act. There are four judges of the HC. What is our wisdom to say anything? We just want to satisfy ourselves whether your allegations are correct or not prima facie. Let's have faith in the Committee", said Justice Raman, initially even reluctant to indicate a specific time frame to the Committee.

"Because of shortage of time, they couldn't apply their mind independently. Had they done so, would we have said anything?", observed the bench while ordering the JJC to submit a fresh report by December 3 addressing the issues raised by the petitioners.

"I am the editor of a newspaper called the Kashmir Times which is in circulation in Kashmir and in Srinagar. Because of the shutdown, there couldn't be a Srinagar edition. From 11th October, a truncated version of the newspaper has been resumed...", began Advocate Vrinda Grover on Tuesday on behalf of petitioner Anuradha Bhasin.

"There is no internet, no 3G, no 4G! All forms of data have been shutdown- internet and broadband! I can use my mobile to make a call but cannot check my mail or use any other app. Prepaid mobiles are not even working in the Kashmir valley. There are no landlines! Public transport in the Kashmir valley is very limited! It has been 90 days since the shut down!", she continued.

The bench headed by Justice N. V. Ramana made a note of the services abandoned, also insisting that they be brought to the notice of Solicitor General Tushar Mehta who is expected to reply on Wednesday.

"I need reporters on the ground for news gathering. Then I need to collate the paper, editorial inputs are required, pages have to be designed. After all this, it has to be sent for printing to a press which is 12 km away. Everything is debilitated because of the shut down!", she pleaded.

"The freedom of expression, the right of press itself has been extinguished! This curtailment of the right of access to internet has to be tested on the touchstone of reasonableness and proportionality...they have an apprehension of misuse of data services by anti-national elements which might create a law and order situation, resulting in loss of life? But their own data shows that terrorism incidents have been on a downward spiral from the 1990s, when there was no internet, to 2005 when the state got internet, to 2009...is there any connection between internet and terrorist acts?"

Next, Ms. Grover proceeded to discuss the Rules framed under section 7 of the Indian Telegraph Act to regulate the temporary suspension of telecom services in case of public emergency or for public safety- "The word 'temporary' will now lose all its meaning! It has been 90 days"

She indicated section 5(2) of the Act which provides that the Central or the state government may, for reasons to be recorded in writing, order that any message or class of messages to or from any person or class of persons, or relating to any particular subject, shall not be transmitted, or shall be intercepted or detained, or shall be disclosed to the Government- "Some messages may have to be detained or stopped from being transmitted, that too for reasons which are based on some findings and are to be recorded. Not all the messages in the entire region can be detained!"

Further, she referred to the Proviso to the said sub-section- that press messages intended to be published in India shall not be intercepted or detained, unless their transmission has been prohibited under this provision. "We are a separate and different class of messages. We are protected by the Proviso. We are not covered under the general order, there has to be a specific prohibition"

Finally, she drew the bench's attention to the order of the Inspector General of Police, Kashmir Zone, which was only to reduce 3G/4G services to 2G, in apprehension of the misuse of data by anti-national elements. "Then on August 4 was the confirmation order of the Principal Secretary. It only confirmed this order to reduce the speed of the internet for Kashmir, and not shut it down altogether!"

"Then there is the cutting off of landline services. Why? They don't use any data! This shows there has been no application of mind in passing the orders!", she concluded for the day.

The hearing will resume tomorrow.