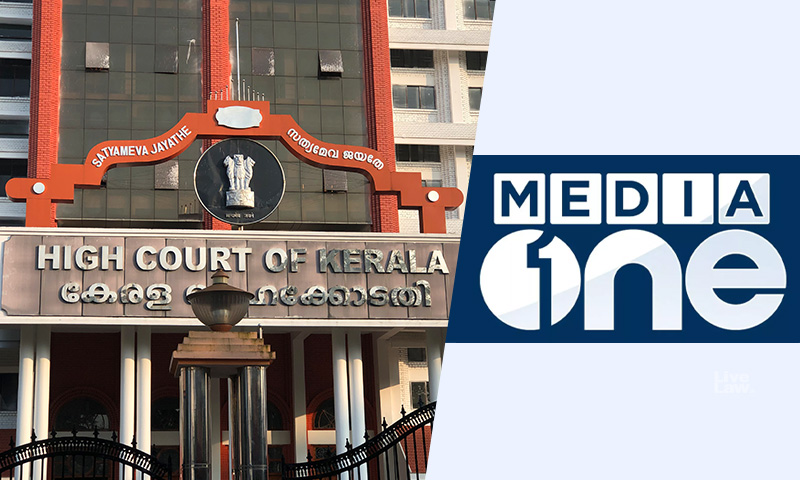 The Kerala High Court on Tuesday upheld the order passed by the Union Ministry of Information and Broadcasting to not renew the license granted to Malayalam news channel MediaOne for broadcast. The Court dismissed the writ petition filed by Maadhyamam Broadcasting Ltd (the company running the channel) challenging the Union's decision.Justice N. Nagaresh held that after perusing the...

The Kerala High Court on Tuesday upheld the order passed by the Union Ministry of Information and Broadcasting to not renew the license granted to Malayalam news channel MediaOne for broadcast. The Court dismissed the writ petition filed by Maadhyamam Broadcasting Ltd (the company running the channel) challenging the Union's decision.

Justice N. Nagaresh held that after perusing the files from the Union Ministry of Home Affairs, it has found intelligence inputs that justify the denial of security clearance to the channel.

"Going through the files, I find that the Ministry has called for intelligence inputs. Based on the intelligence inputs, the committee of officers has found that security clearance should not be given. The Ministry has decided to accept the finding of the Committee of Officers. There are inputs justifying the denial of security clearance. Therefore I am dismissing the writ petition."

Notably, the Court emphasised that national security was an executive responsibility where the legislature and the judiciary only had complementary roles.

"Since national security must be paramount, natural justice must then give way."

Justice Nagaresh further said that the petitioner's reliance on Supreme Court's Pegasus judgment was not worthwhile as it was rendered in the context of the right to privacy.

The judge further said that the Supreme Court's judgment in the 2019 case Digicable (Network) India Pvt Ltd v Union of India which held that there is no right to a prior hearing when clearance is denied on grounds of national security was more relevant in deciding this case.

"This court is not inclined to interfere with the denial of renewal of the petitioner's license. The writ petition fails and is accordingly dismissed", the order said.

Though Senior Advocate S Sreekumar, the counsel for the channel, requested that the judgment be kept in abeyance for two days to enable the filing of an appeal, the bench did not accept the same.

"I'm not inclined. I understand the situation of the company and the employees, but I cannot extend it(the interim order) even for an hour", Justice Nagaresh said.

Last week, the Court had called for the files from the Union Ministry of Home Affairs which cited security reasons to recommend the revocation of the channel's license.

The plea was filed last week a few hours after the Ministry suspended the channel's telecast citing security concerns. Accordingly, MediaOne, which is owned by Jamaat-e-Islami,  went off the air on the same day.

However, upon hearing the preliminary arguments set out by both sides, the Court granted the channel an interim relief allowing it to telecast, which was extended on two occasions till today.

In its plea, the channel had contended that it had not involved itself in any sort of anti-national activity and thereby prayed that considering the huge investment involved in the business, the order of the Ministry be withdrawn.

However, the Central government had informed the Court through a statement that the channel's license was cancelled due to security reasons, which could not be revealed to the public.

The Centre had earlier issued permission enabling the petitioner channel to uplink and downlink TV programmes, and this permission was valid till 29.09.2021.

The petitioner was reportedly issued with a show-cause notice by the Centre on January 5, 2022, on why the Centre should not revoke its license in consideration of national security and public order. In response to this notice, the company had requested not to proceed with the notice without affording an opportunity of hearing and that they were not informed of the reasons why the security clearance was denied.

However, the Ministry allegedly proceeded to revoke the permission granted to the petitioner with immediate effect, thereby removing the channel from the list of permitted channels. It was alleged that such a rash move without affording an opportunity of hearing or informing the particulars of their contravention jeopardised the channel.

Meanwhile, two intervening petitions were filed in the matter by the Kerala Union of Working Journalists and some employees of the channel.

Arguments On Behalf of MediaOne

Senior Advocate S Sreekumar appearing for MediaOne assisted by Advocate K. Rakesh had submitted that national security cannot be a reason to cancel the license without prior notice. He referred to the Supreme Court's judgment in the Pegasus case to submit that State can't merely cite national security to withhold information.

Reliance was also placed on Supreme Court's judgment in the Anuradha Bhasin case to convey that the State has to respect freedom of the press. The senior counsel sought to distinguish the case cited by the ASG by expressing that it was an instance of a fresh application, whereas MediaOne had been in operation for many years.

The senior counsel added that such a notice could only be served by the Ministry of Home Affairs, and not the Ministry of Information and Broadcasting according to the Policy Guidelines laid down for uplinking and downlinking of television channels. He had also argued extensively on the procedural differences in applying for a fresh security clearance and for renewal.

Senior Advocate Jaju Babu appearing on behalf of KUWJ further submitted that even after new restrictions were brought into place through amendments, security clearance issued to MediaOne was renewed. He added that the order of the Ministry affects the freedom of the press and that this was concerning. The senior counsel added that the license was revoked without following any due process of law or the statutory mandate and that no reasons were assigned to prove that there was a breach of national security.

Arguments On Behalf of Centre

Assistant Solicitor General of India S Manu produced the reasons why the Ministry suspected security threat by the channel's telecast in a sealed cover upon court directions. The ASGI referred to a 2019 Supreme Court decision that upheld the cancellation of Cable TV licenses observing that the applicant has no right to prior notice when national security issues are involved.

He further pointed out that as per the relevant guidelines, the security clearance from the Ministry of Home Affairs is necessary to grant permission for telecast. It was also vehemently argued that the Court should not grant the interim order since it was similar to granting the final relief sought for in the petition.