Lakhimpur Kheri Violence : Supreme Court 'Not Satisfied' With UP Police Probe; Asks 'Is This The Way You Treat Accused In Other Murder Cases?By Sending Summons?' 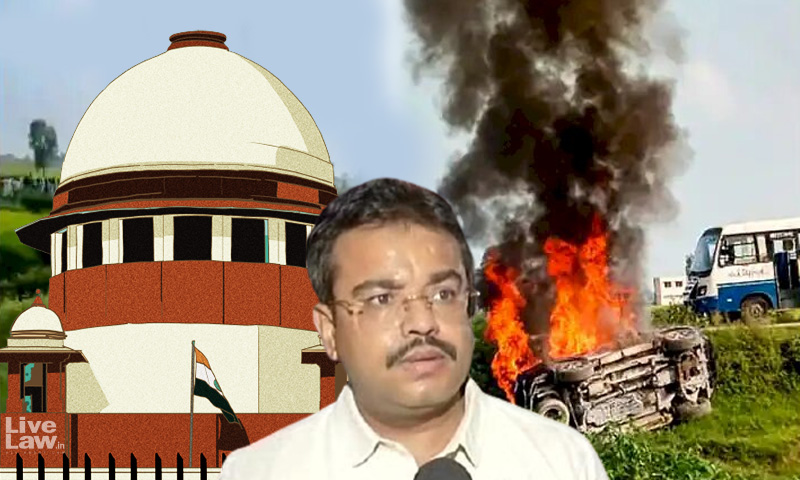 The Supreme Court on Friday recorded its dissatisfaction over the investigation done by the Uttar Pradesh Police in the Lakhimpur Kheri violence, which claimed the lives of 8 people, four of them being farmers protesters who were allegedly mowed down by the vehicles in the convoy of Ashish Mishra, the son of Union Minister and BJP MP Ajay Kumar Mishra.A bench led by the Chief Justice...

The Supreme Court on Friday recorded its dissatisfaction over the investigation done by the Uttar Pradesh Police in the Lakhimpur  Kheri violence, which claimed the lives of 8 people, four of them being farmers protesters who were allegedly mowed down by the vehicles in the convoy of Ashish Mishra, the son of Union Minister and BJP MP Ajay Kumar Mishra.

A bench led by the Chief Justice of India recorded in the order that the court was not satisfied with the actions of the state.

"We are not satisfied with the actions of the state...", the bench recorded in the order.

Senior Advocate Harish Salve, who appeared for the State of Uttar Pradesh, assured the bench that satisfactory steps will be taken and investigation by an alternate agency will be explored. Taking note of this, the bench has adjourned the matter to October 20, without making further comments.

The bench also recorded in the order that Senior Advocate Salve assured that he will speak to the higher officials of the State Police to do the needful to preserve the evidence and materials in the matter.

During the hearing, the bench asked why the accused has not been arrested. When Salve said that the police has served summons on the main accused Ashish Mishra, the bench asked if that was the norm in all murder cases.

Senior Advocate Harish Salve appeared for the State of Uttar Pradesh today. He submitted that summons were issued to Ashish Mishra to appear at 11 AM tomorrow, and if he does not appear, the rigour of law will take its course.

"Is it the way you treat the accused in other cases as well? Sending notice?", the Chief Justice of India said at the outset.

"We expect this to be a responsible government. When there is a serious allegations of murder and gun shot injury..how the accused in other parts of the country are treated? Sending notice like please come please tell us?", the CJI asked.

Salve said that he had asked this to the police and he was told that the post mortem report did not show any gun shot injury, though there was an allegation of firing.

"It is a serious matter", Salve said.

"If it is serious, then the way it should've proceeded it has not proceeded is what we feel. It appears its only in words & not in actions", the CJI said.

"They should have done the needful", Salve said.

"Mr.Salve, as the saying goes, the proof of the pudding is in eating", Justice Kohli quipped.

"What is the message we are sending?In normal circumstances, if 302 case is registered what will police do? Go and arrest the accused!", the CJI stated.

"And it is a case of brutal murder of 8 people. Law must have taken its course against whoever is involved", Justice Surya Kant joined.

Mr.Salve said that whatever needs to be done will be done.

The CJI also pointed out that all the members of the Special Investigation Team of the UP Police are local officers. "This is what happens when all the people are local people", CJI said.

"Has the state made any request for CBI investigation?", the CJI asked.

"The state has not...it is completely in your lordships hands...may I suggest. Your lordship may keep it after vacations and in the meantime the State will take steps", Salve replied.

"Mr.Salve, we have respect for you. We hope the state will take necessary steps. Because of the sensitivity of the issue, we are not making any comments. And CBI may not be a solution for reasons you better know....because of persons... Better some other mode you find out, we'll take up immediately after vacation", the CJI said.

Salve admitted that what "they(UP Police) have done is a hash" and should have done better to "instill confidence".

"We've heard Sr Adv Harish Salve. The learned senior counsel explained the various steps taken filed by State & status report was also filed. However we are not satisfied by steps taken by state. The learned senior counsel has ensured that steps will be taken by next date, to satisfy this court and alternatives will be considered to have investigation by another agencies. In that view, we're not inclined to go in detail, list after vacation. Meanwhile, he has ensured that he will communicate to highest police officer in the state to take steps to protect evidence and other materials".

Bench: We've heard Sr Adv Salve, he explained steps taken filed by State & status report was also filed. However we are not satisfied by steps taken by state. #LakhimpurKheriViolence #SupremeCourt

The Court had yesterday directed the Uttar Pradesh Government to file a status report by today regarding the investigation in the Lakhimpur Kheri violence,

The Court stated that the status report should contain the details of the accused and should mention if they have been arrested. The bench also told the UP Government to ensure medical aid to the mother of deceased Lovepreet Singh, who was said to be unwell due to mental shock.

A First Information Report (FIR) has already been lodged against the son of Union Minister of State for Home Affairs and BJP MP Ajay Kumar Mishra 'Teni', Ashish Mishra alias Monu in connection with the recent violent incident of Lakhimpur Kheri, in which a total of 8 people died, four of whom were mowed down by a vehicle allegedly being driven by Mishra.

The FIR has been filed under Indian Penal Code (IPC) Sections 302 for murder, 304-A for causing death due to reckless driving, 120-B for criminal conspiracy and 147 for rioting, 279 for rash driving, 338 for causing grievous hurt to any person by doing any act so rashly or negligently as to endanger human life along with other penal provisions at the Tikunia police station.

A letter petition has also been moved before the Allahabad High Court seeking CBI probe into the incident arguing that due to this dreadful incident, the law and order of the State of Uttar Pradesh is in great danger and any miss happening may take place if preventive actions are not taken by the state at an earliest.

Allegedly, the SUV was the part of the convoy of Union Minister of State for Home Affairs and BJP MP Ajay Kumar Mishra.

The police has filed a first information report against Ashish Mishra (son of minister Ajay Kumar Mishra) and several others in connection with the violence under Section 302 IPC.