[Land Acquisition] Why SC Read 'OR' In Sec 24(2) As 'AND'/'NOR' In Indore Development Authority Case? 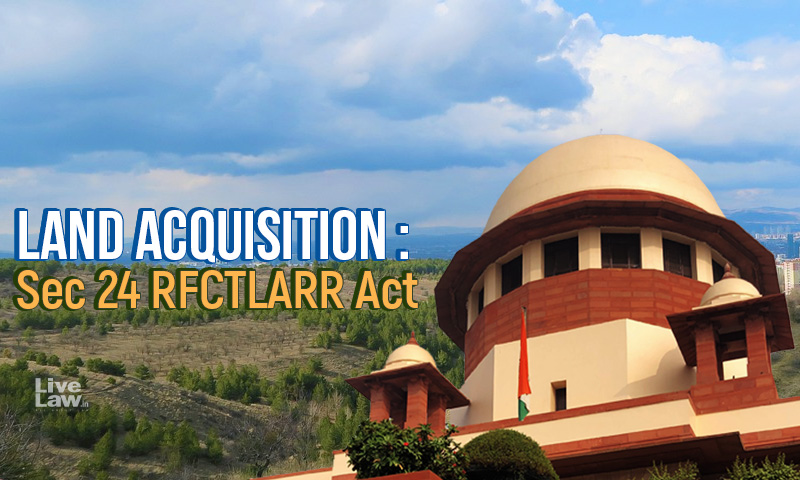 One of the crucial issue considered by the Constitution bench in Indore Development Authority vs Manoharlal and others while interpreting Section 24 of the Right to Fair Compensation and Transparency in Land Acquisition, Rehabilitation and Resettlement Act, 2013, was whether the word "or" in Section 24(2) of the Act of 2013 used in between possession has not been taken or compensation...

One of the crucial issue considered by the Constitution bench in Indore Development Authority vs Manoharlal and others while interpreting Section 24 of the Right to Fair Compensation and Transparency in Land Acquisition, Rehabilitation and Resettlement Act, 2013, was whether the word "or" in Section 24(2) of the Act of 2013 used in between possession has not been taken or compensation has not been paid to be read as "and"?

As per Section 24(2) of the Act, in case of land acquisition proceedings initiated under the Land Acquisition Act, 1894, where an award under the said section 11 has been made five years or more prior to the commencement of this Act but the physical possession of the land has not been taken or the compensation has not been paid, the said proceedings shall be deemed to have lapsed and the appropriate Government, if it so chooses, shall initiate the proceedings of such land acquisition afresh in accordance with the provisions of this Act. 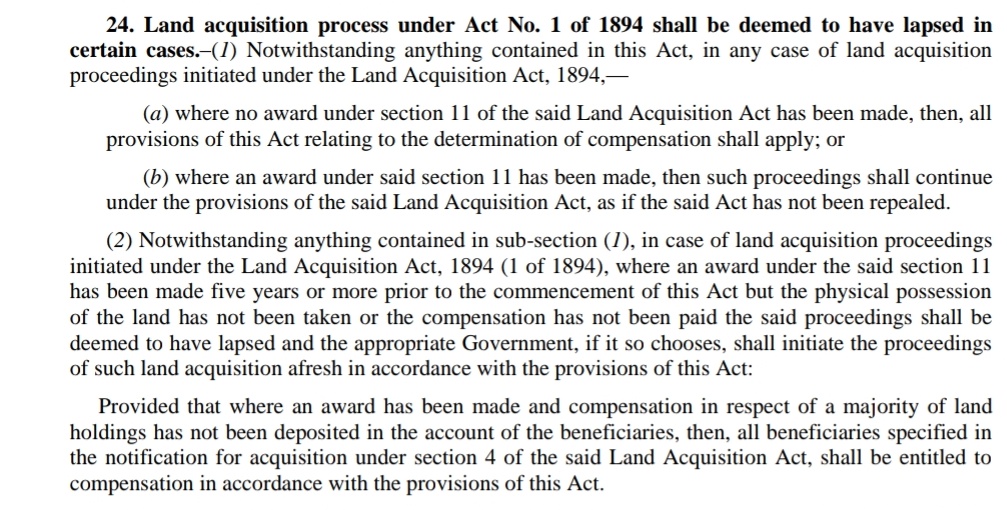 According to the State, when two negative conditions are connected by "or," they are construed as cumulative, the word "or" is to be read as "nor" or "and."  In other words, the State argued that for proceedings under old Act to lapse, both the conditions should exist - failure to take possession and failure to pay compensation. The landowners argued that lapse of acquisition occurred in case of either of the eventualities. Answering this issue in favour of the contention adopted by the State, the bench held:

"Word "or" is to be read as 'and' or as 'nor,' even if one of the requirements has been fulfilled, i.e., either possession taken or compensation paid, there is no lapse unless both conditions are fulfilled, i.e., compensation has not been paid nor has possession been taken; the legality of the concluded proceedings cannot be questioned. It is only in the case where steps have not been taken by the Authorities. The lapse or higher compensation is provided under Section 24(2) and its proviso under the Act of 2013."

It was held in conclusion :

Following are the reasons given in the judgment authored by Justice Arun Mishra for holding thus:

According to the bench, since two negative conditions have been prescribed in Section 24(2), even if one condition is satisfied, there is no lapse. It also noted that In M/s. Ranchhoddas Atmaram and Anr. v. The Union of India and Ors.,a Constitution Bench had observed that if there are two negative conditions, the expression "or" has to be read as conjunctive and conditions of both the clauses must be fulfilled. In Prof. Yashpal & Ors. v. State of Chhattisgarh & Ors., the expression "established or incorporated" was read as "established and incorporated.", the bench noted. Various other foreign and Indian judgments have been referred to, in which OR has been read as AND.

Any other interpretation would entail illogical results. That apart, if the rule of interpretation with respect to two negative conditions qualified by "or" is used, then "or" should be read as "nor" or "and".

Absence of provisions of refund of compensation

The Court observed that interpreting "or" under Section 24(2) of the Act of 2013 disjunctively, would result in an anomalous situation - because, once compensation has been paid to the landowner, there is no provision for its refund. The bench said:

It was fairly conceded on behalf of the landowners that they must return the compensation in the case of lapse if possession has not been taken. In case possession is with the landowner and compensation has been paid, according to landowners' submission, there is deemed lapse under Section 24(2) by reading the word "or" disjunctively. It would then be open to the State Government to withdraw the money deposited in the Reference Court. It was also submitted that it is inherent in the notion of lapse that the State may recover the compensation on the ground of restitution. In our opinion, the submissions cannot be accepted as an anomalous result would occur. In case physical possession is with the landowner; and compensation has been paid, there is no provision in the Act for disgorging out the benefit of compensation. In the absence of any provision for refund in the Act of 2013, the State cannot recover compensation paid. The landowner would be unjustly enriched. This could never have been the legislative intent of enacting Section 24(2) of the Act of 2013. The principle of restitution, unless provided in the Act, cannot be resorted to by the authorities on their own. The absence of provision for refund in the Act of 2013 reinforces our conclusion that the word "or" has to be read as conjunctively and has to be read as "and." The landowners' argument about the State's ability to recover such amounts, in the absence of any provision, by relying on the principle of restitution, is without merit, because firstly such principle is without any legal sanction. The State would have to resort to the remedy of a suit, which can potentially result in litigation of enormous proportions; besides, the landowners can well argue that the property (i.e. the amounts) legally belonged to them and that the limitation for claiming it back would have expired. Several other potential defences would be available, each of which would result in multifarious litigation. Therefore, the contention is ex-facie untenable and insubstantial.

Referring to the speech made by Jairam Ramesh, then Minister where he stated that if the award has been passed and no compensation has been given and no physical possession has been taken the new law will be applicable., the bench said:

"the Minister concerned has stated that there would be lapse only if in case possession has not been taken and compensation has not been paid. The emphasis right from the beginning was on possession. Thus, from the perusal of debate too, it is apparent that the word "or" had been understood as "and"."

As per provisions of section 24(1)(b) where an award has been passed under section 11 of the Act of 1894, then such proceedings shall continue under the provisions of the said Act as if it has not been repealed. Rejecting the contention of the land owners that the proviso to Section 24(2) as part of Section 24(1)(b), the bench said thus:

Considering the placement of the proviso, semicolon having been used at the end of section 24(2), considering the interpretation of section 24(1)(b) and the repugnancy which would be caused in case the proviso is lifted which is not permissible and particularly when we read the word 'or' as 'nor' in section 24(2), it has to be placed where the legislature has legislated it, it has not been wrongly placed as part of section 24(2) but is intended for beneficial results of higher compensation for one and all where there is no lapse, but amount not deposited as required. Higher compensation is contemplated by the Act of 2013, which intention is fully carried forward by the placement and interpretation.