'Law Must Not Only Be Validly Framed, It Must Have The Moral Authority To Rule': Tripura HC Chief Justice Akil Kureshi 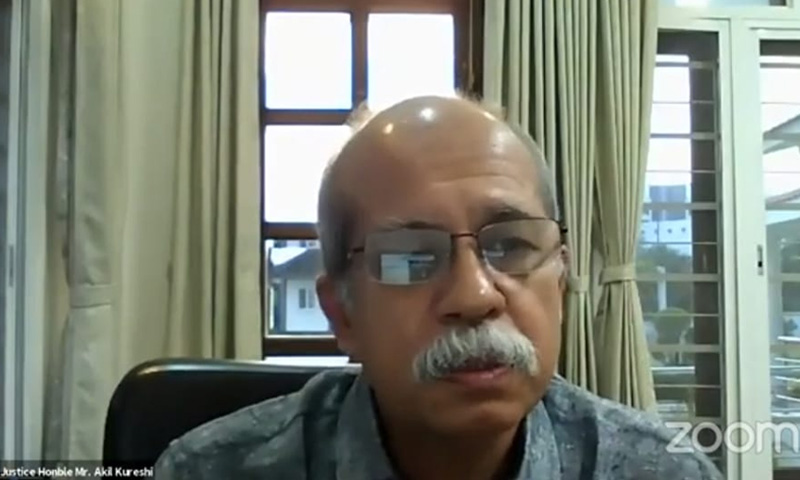 Speaking on the influence of Gandhian principles in law, Justice Akil Kureshi, Chief Justice of the Tripura High Court stated on Saturday,

"Law must not only be validly framed but must also be a just law. The very concept of justness is inbuilt in every sphere of law."

Justice Kureshi was speaking in a webinar on 'Gandhian Influence on Law' – organised by the Delhi High Court Women Lawyers' Forum in association with LiveLaw on the occasion of Gandhi Jayanti.

"Gandhiji challenged the might of the empire only through one principle, that law itself is not enough. It must have the moral authority to rule."

He further stated that one of the two contemporary examples of this idea of law that has been imbibed in our legal system is the evolution of the principle of 'manifest arbitrariness' by former Supreme Court judge, Justice Rohinton Nariman as the third element of challenge to the constitutionality of a legislation.

Before 2017, there were only two qualifications for laws to pass the constitutionality test- whether the Parliament has the legislative competence to enact such a law and whether the law violates any of the fundamental rights or any other constitutional provision. However, a third i.e. whether the law is manifestly arbitrary was added in 2017.

The principle of 'manifest arbitrariness' was first used by Justice Nariman in 2017 to strike down the practice of triple talaq. Consequently, the principle has been used consistently by the Supreme Court. For instance, homosexuality as well as adultery were both decriminalised for being manifestly arbitrary.

Another example of Gandhian influence on the legal system is former American Supreme Court Justice Benjamin Cardozo's advocacy of the pragmatic approach to law.

"He always advocated the pragmatic approach to judging, do not just go by the letter of the law. The final cause of law's very existence is the well-being of the society", Justice Kureshi said referring to Justice Cardozo.

Lessons to be learnt from Gandhiji's practice as a lawyer

Speaking on the lessons that can be imbibed by emulating Mahatma Gandhi's practice as a lawyer, Justice Kureshi stated,

"At all stages he realized that he did not have enough knowledge or experience. When he came back from England and started his practice as a lawyer, he had no idea of Indian laws. He realized that cross examination of witnesses is the most important skill that a trial lawyer must have."

Justice Kureshi further pointed out that Gandhiji always empahsised on the importance of facts in any case in order to truly honour the delivery of justice.

"He was of the opinion that facts cannot be divested from law in any case. Every case rests on its perspective and as he pointed out he always put enormous importance on facts. In one case he said, that equity is in favour of his client, the law is against him. He paid homage to all facts until he brought about a convergence between justice and law", he stated.

Opining on Gandhiji's belief in the power of persuasion and negotiation, Justice Kureshi stated that for Gandhiji both in his capacity as a freedom fighter or as a lawyer, any form of combat was always the last resort.

"For him, either as a lawyer or as a freedom fighter, taking up a fight or a battle was always a matter of last resort. He continuously tried negotiation, persuasion, conciliation on and off the record till all doors were shut, he only then went for a fight and a battle", he opined.

The other important virtue that Gandhiji practiced even as a lawyer was an adherence to human values.

"He was truthful to his client, when he did not know the law, he always came clean. He never held an inconvenient fact back from the Court. He was fair to his opponents and above all he was always truthful..", Justice Kureshi enumerated further.

He further remarked that over time, Gandhiji's belief in law as a tool to bring about social change started to wane. Gandhiji realized that law was being used as a 'tool' to subjugate the Indian population both in South Africa as well as in India. Thereafter, the principle of Satyagraha or peaceful resistance was embraced by Gandhiji.

Great Trial of 1922- An insight into Gandhiji's philosophy

Justice Kureshi made a reference to the sedition proceedings that were initiated against Mahatma Gandhi and Shankarlal Ghelabhai Banker (publisher) under Section 124A of the Indian Penal Code for their articles in Young India in the wake of the Chauri Chaura incident and the Jallianwala Bagh massacre.

The trial which lasted for only a day had taken place on March 18, 1922 before C. N. Broomfield, District and Sessions Judge, Ahmedabad,

Referring to the speech of Mahatma Gandhi, Justice Kureshi pointed out that the speech was completely extempore and is one of the greatest speeches of a century. He then proceeded to read certain excerpts from the speech which still strike a chord.

"Before I read this statement I would like to state that I entirely endorse the learned Advocate-General's remarks in connection with my humble self. I think that he has made, because it is very true and I have no desire whatsoever to conceal from this court the fact that to preach disaffection towards the existing system of Government has become almost a passion with me, and the Advocate-General is entirely in the right when he says that my preaching of disaffection did not commence with my connection with Young India but that it commenced much earlier… he is quite right when he says, that as a man of responsibility, a man having received a fair share of education, having had a fair share of experience of this world, I should have known the consequences of every one of my acts. I know them. I knew that I was playing with fire. I ran the risk and if I was set free I would still do the same. I have felt it this morning that I would have failed in my duty, if I did not say what I said here just now", Gandhiji had stated in his historic address.

Mahatma Gandhi had subsequently been imposed with a sentence of 6 years of imprisonment after he wilfully pleaded guilty of sedition.

"This one trial which lasted less than a day shook an empire. On one side there was the British empire with all its might and they used to say it is an empire where the sun never sets…against the full empire was an unarmed half-clad fakir", Justice Kureshi stated while enumerating upon the enormous significance of the trial.

Our Constitution has imprints of Mahatma Gandhi all over it

He further remarked that the abolition of untouchability, the introduction of the principle of universal adult suffrage were all a result of Gandhian influence.

"Perhaps for the first time in the history a democracy started by giving voting rights to every one of its adult citizens…The USA did not start this, the Blacks and Women got voting rights much later", Justice Kureshi stated.

The extension of citizenship rights under Article 7 of the Constitution sans any reference to religion, caste or creed was also heavily influenced by the ethos of Gandhiji, Justice Kureshi stated.

Furthermore, it was stated that Gandhiji's philosophy of 'Purna Swaraj' did not entail only freedom from British Rule, instead, the core idea behind Purna Swaraj was the guarantee of equal rights for all.

"Gandhiji's thought of poorna swaraj—he said that freedom from the British rule is not my idea of freedom, I want equality, I want elimination of untouchability from the hearts of the people, I want every citizen to have equal rights—that is my concept of poorna swaraj", Justice Kureshi remarked.

Message For Young Lawyers- What You Choose, Defines You As A Person

Encouraging young lawyers to make choices in life that they are proud of, Justice Kureshi stated,

"You are young, energetic and full of new ideas and that is how it should be. Remember life will sometimes present difficult choices and what you choose will define you as a person, make sure you make a choice later on that you will be proud of and everything else will fall in place"

"This pandemic has hit everyone very hard. It has the hit the weakest and the poorest of the world the hardest. So wherever you are, in whatever stage of your career you are, think of people who are less fortunate, be kind and gentle to others because life is too short to fill it up with hatred and mistrust."