Whether LIC IPO Amounts To Expropriation Of Surplus Meant For Policyholders? Supreme Court To Examine 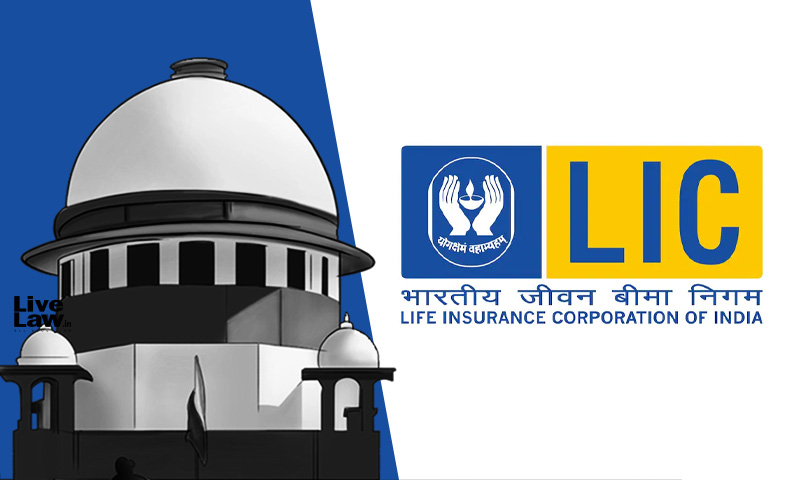 The Supreme Court on Thursday issued notice in the petitions challenging Central Govt's decision to trade 5% of its shareholding in the Life Insurance Corporation through IPO.

The bench of Justices DY Chandrachud, Surya Kant and PS Narasimha refused to grant any interim relief against the LIC IPO.

The bench said that the contention raised by Senior Advocate Indira Jaising for the petitioner that the the amendment to Section 28 of the LIC Act to facilitate the IPO amounts to expropriating the surplus available to policyholders in favour of shareholders would "warrant further deliberation". Jaising argued that it would amount to violation of property rights under Article 300A of the Constitution.

As regards the challenge to the amendments made to the LIC Act 1956 through the Finance Act 2021 which has been passed as a money bill, the bench tagged the matter along with the reference pending before the larger bench on the money bill issue in the Rojer Mathew case.

The bench in their order said, "We are inclined to issue notice. On the question of Section 28 of the LIC Act, the submission by the petitioner would warrant further deliberation. The Court has been apprised of the fact that 73 lakh applicants have subscribed to the IPO & it has been subscribed over 6 times even in the category which has been reserved for Policy Holder's.

It is necessary to note that the dilution of LIC has been 3.5%. 22.13 crores equity shares of face value are being offered at premium of INR 939 and receipts in the Consolidated Fund of India is of Rs 20500 crores; IPO opened for anchor investors on May 2 2022. For General Public on May 4 and closed on May 9; IPO has been oversubscribed.

The directions were issued in the pleas which had also challenged the constitutional validity of the provisions of sec 130, 131, 134 of the Finance Act 2021 & certain provisions of the LIC Act 1956.

The bench was considering a writ petition challenging the amendments to LIC Act and the petitions challenging the orders of the Madras and Bombay High Courts which refused to interfere with LIC IPO.

Appearing for the petitioners, Senior Advocate Indira Jaising submitted that the process which led up to enactment of the amendment to LIC act was on the basis that it was a money bill. On this aspect, it has been submitted that the constitutional issue relating to passage of bill a money bill has been referred to the Constitution Bench in the Rojer Mathew case in 2019.

It was also her contention that as result of amendment to Section 28 of the LIC Act, the character of LIC which is in the nature of mutual benefit society is being sought to be converted into a joint stock company. She further contended that this amounted to expropriation of surplus from participating policy holders to shareholders to whom shares would be allotted. She further argued that earlier 95% of surplus went to Participating Policyholders while 5% was with the government and this would be altered by the amendment which has been brought and this would violate Article 300A.

She further argued that though the IPO IPO has been closed on May 9 2022, an interim order was necessary to obviate further complexities. Against this backdrop, she submitted that either the court may direct that the money which has been placed in ASBA Account shall be retained in those accounts during the pendency of these proceedings or alternatively the rights of the investors will be dependent on the outcome of the proceedings pending.

Senior Advocate Shyam Divan has appeared on behalf of the plea arising from judgment of Madras High Court & Senior Advocate Anita Shenoy appeared for the SLP challenging the ad interim order of the Bombay High Court.

Appearing for the Union and LIC, Additional Solicitor General Venkataraman submitted that the bill which eventually resulted in Finance Act 2021 was passed on March 28, 2021 nearly 15 months ago. He further contended that the plea under Article 32 has been instituted on May 9 2022, the date on which LIC IPO stands closed.

As regards the judgment of Madras High Court, it has been submitted that the SLP was filed on May 2 2022 and though the Bombay High Court had declined ad interim relief on April 11 2022 a precipice was declined.

Objecting to the grant of interim relief, ASG submitted that Sec 28 of LIC ACT as originally Act did not confer any contractual right to Participating Policyholders to appropriate the 95% surplus and was always dependent on the notification of the Central Government. He further contended that no guarantee has been made to the participating policy holders on the quantum.