'Members Of Bar Have Right To Know Why A Competent & Fearless Judge Is Transferred' : Madras HC Lawyers Write To SC Collegium Over CJ Sanjib Banerjee's Transfer 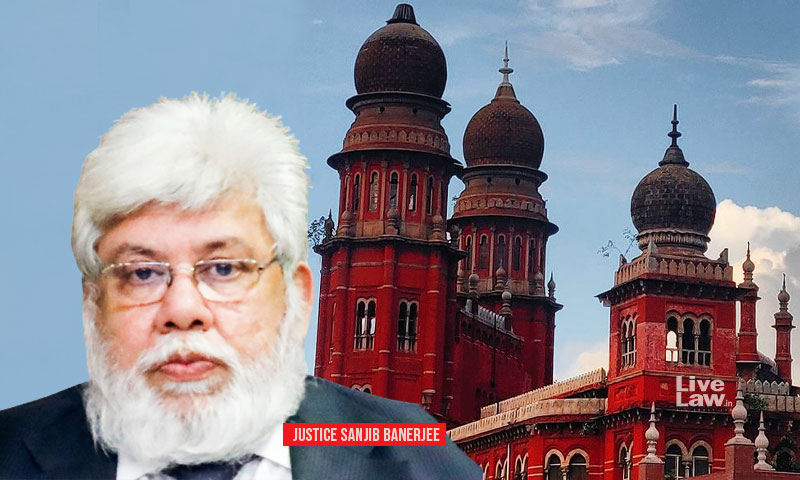 The proposed transfer of Madras High Court Chief Justice Sanjib Banerjee to the Meghalaya High Court pursuant to the Supreme Court Collegium's recommendation dated September 16 has resulted in over 200 practising advocates of the Madras High Court writing to the Chief Justice of India, N.V.Ramana and other four members of the Collegium expressing their anguish over this seemingly abrupt...

The proposed transfer of Madras High Court Chief Justice Sanjib Banerjee to the Meghalaya High Court pursuant to the Supreme Court Collegium's recommendation dated September 16 has resulted in over 200 practising advocates of the Madras High Court writing to the Chief Justice of India, N.V.Ramana and other four members of the Collegium expressing their anguish over this seemingly abrupt decision. It may be noted that the September 16 recommendation of the Collegium was only made available to the public on Tuesday raising further doubts over such a delayed publication.

The memorandum signed by 237 advocate along with their enrolment numbers has been addressed to the members of the Supreme Court Collegium- CJI NV Ramana, and Justices U.U.Lalit, A.M.Khanwilkar, D.Y.Chandrachud, and L.Nageswara Rao.

Whether the transfer of Chief Justice Banerjee is in 'public interest' and 'for better administration of justice?'

At the outset the memorandum questions the basis of such a transfer by stipulating as to whether the decision can be termed to be in "public interest" and "for better administration of justice", two factors held to be relevant by judicial dictum. It also states that such a transfer of Chief Justice Banerjee within merely ten months of assuming office has been preceded by the elevation of No.2 Judge, Justice M.M.Sundresh to the Supreme Court, and the transfer of the No.3 Judge, Justice T.S.Sivagnanam, to the Calcutta High Court.

The memorandum further underscores that the transfer of Chief Justice Banerjee from a chartered High Court with a sanctioned strength of 75 judges to the High Court of Meghalaya, established in 2013, with a current strength of two judges, raises disconcerting questions.

"While transfers for better administration of justice may be necessary in principle, members of the Bar have a right to know why a competent, fearless judge and an efficient administrator of a large High Court where more than 35000 cases were filed this year should be transferred to a Court where the total number of cases instituted in a month is on an average 70-75", it states further.

Secrecy surrounding Collegium's decisions lead to a perception of arbitrariness

Making a reference to similar transfers in the past, the memorandum further avers that such a transfer raises the following speculations-i) whether the transfer was caused due to improprieties by the concerned judge or ii) whether there were external factors that penetrated the decision making process when such strong pointers existed. It damages an honest judge's reputation and tends to lower the image of the judiciary in public.

"It is the secrecy that surrounds the Collegium's decisions and lack of stated criteria that lead to a perception of arbitrariness . Ultimately, the judiciary as an institution stands to lose", the advocates state further.

It may be noted that in 2019, the then Chief Justice of Madras High Court VK Tahilramani had been transferred to the Meghalaya High Court. Without accepting the transfer, Justice Tahilramani had tendered resignation.

Questioning the lack of transparency and opacity in decision making by the Collegium, the advocates have stated,

"The Collegium of the Supreme Court appears to have recommended the transfer of Justice Banerjee on 16th September, 2021. This decision was made public only on 9th November 2021.This raises the worrisome question of lack of transparency and opacity in decision making by the Collegium. Even if the Collegium is privy to information that may have prompted such a drastic measure, members of the Bar and the public have a right to know the reasons for this transfer. Until that is done, the only conclusion that can be drawn is that a judge is being rebuked for discharging his duties without fear or favour"

The memorandum has also highlighted that Chief Justice Banerjee has steered the High Court through an unprecedented and a difficult period by ensuring that the justice system continues to function unhampered and unhindered by the pandemic. It has been pointed out that the Chief Justice Banerjee has consistently sought accountability from authorities at all levels in their discharge of constitutional and statutory duties.

"He is known to be impartial, open to suggestions from all quarters for improving the functioning of the justice system and has undertaken proactive measures to strengthen the judiciary. Chief Justice Banerjee recently steered a massive gender sensitisation programme covering 1700 staff of the judiciary and has assured that the programme would be extended to the judiciary too in the State, including High Court judges", the memorandum avers further.

'Inexplicable' that in ten months the Collegium has revised its opinion

Noting that the Collegium had recommended Chief Justice Banerjee only in December 2020 after considering his vast experience as a judge of the Calcutta high court and suitability to head a Chartered High Court, the memorandum has questioned how within only ten months, the Collegium could revise its opinion and transfer him to a Court "where any avenue for utilising his vast experience would be severely limited".

"Short tenures and abrupt transfers stand in the way of a cohesive leadership and meaningful administrative reforms. A change in leadership every few months will have an adverse impact on not just the administrative functioning of the High Court, but crucial decisions to be taken by the High Court Collegium will be delayed or suffer from the loss/lack of experience that is gained over several months", the advocates have highlighted further.

The memorandum has pointed out that the Chief Justice in the recent past has passed several orders upholding constitutional rights and values of free speech, secularism, free and fair elections, right to health and state accountability that may well have earned the ire of those in power. In a recent order dismissing a Public interest litigation seeking to prevent the Chief Minister of Tamil Nadu from chairing an advisory committee under the Hindu Religious and Charitable Endowments (HR&CE) Act until he takes a pledge in front of a Hindu god in a nearby Hindu temple, Chief Justice Banerjee had held,

"There has to be a time when the prejudice and vendetta have to be shed particularly when it comes to practicing religion. This is a secular country and secularism implies tolerance for the other religion."

"It is known in legal circles in Tamil Nadu that in order to ensure a totally free and independent judiciary, inquiries were afoot under the tenure of Chief Justice Banerjee to check corruption in the judiciary. His intolerance for corruption and inefficiency is well known and widely appreciated. The instant transfer would quell any such effort to strengthen the judiciary in the State", the memorandum read.

It was further pointed out that just before the elections, the Chief Justice had passed orders directing the Election Commission and the Puducherry police to investigate as to how phone numbers linked to aadhar cards of voters that were not available in public domain, were available with functionaries of the Bharatiya Janata Party for their election campaign.

Such "punishment transfers" send out an alarming signal

The memorandum further stipulates that such transfers have been used to move upright and honest judges who passed orders against the executive to "safer" and "less important" locations. It has been further stated that it is important that the reasons for the transfer of any judge should be made transparent in public interest, for the public ought to know if a judge is being victimised for his fearless actions or is being punished for his inconvenient actions.

"Such "punishment transfers", as they came to be known during the infamous Emergency, send out an alarming signal that honest and fearless judges are subjected to political retribution and independence of the judiciary is under threat. Further, the power to transfer has also been used as a punitive measure when allegations of corruption or nepotism are made against a judge", the advocates note further.

It has also been clearly stated that the memorandum must not be seen as espousing the cause of an individual, but as an earnest request to protect the institution and the independence of the judiciary. The advocates have therefore requested the Collegium to reconsider in public interest its decision to transfer Chief Justice Banerjee to Meghalaya High Court to insulate the judiciary from any external interference.