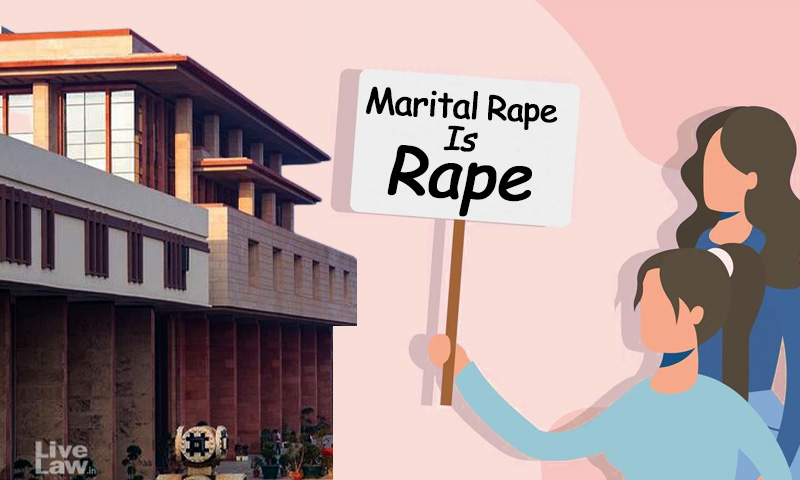 The Delhi High Court on Thursday continued hearing a batch of petitions challenging the exception to Section 375 of the Indian Penal Code, which exempts forceful sexual intercourse by a man with his own wife from the offence of rape.Advocate J Sai Deepak representing Men Welfare Trust today made rejoinder submissions opposing the criminalisation of marital rape before a bench of Justice...

The Delhi High Court on Thursday continued hearing a batch of petitions challenging the exception to Section 375 of the Indian Penal Code, which exempts forceful sexual intercourse by a man with his own wife from the offence of rape.

Deepak submitted that a Court cannot strike down a law or a provision to create a new offence or expand the scope of an existing offence. The Court cannot change the dynamics or objective of the law as intended by the legislature.

He further made submissions on two aspects: one, on the test of constitutionality and two, on various criminal provisions under the Indian Penal Code.

On the aspect of the constitutionality of exception 2 to Section 375, Deepak submitted that his arguments were two fold, first, on the question of jurisdiction or separation of powers and second, is there a case made out to adjudicate upon the vires of the provision on the anvil of the constitution.

Deepak argued that a challenge to legislation cannot be mounted on the ground that the same is inadequate according to the petitioners, or merely because the legislature's view is "loggerheads from the petitioners' view". He, therefore, argued that having different views is no ground for challenging a legislation as unconstitutional.

Deepak relied on the decision of Anuja Kapur v. Union of India (2019) and Saregama India Ltd. v. Next Radio Ltd., to argue that the court in the exercise of judicial review cannot supplant the terms of the provision through judicial interpretation by re-writing statutory language.

"My clients are certainly not against recognising spousal sexual violence. They are merely sayıng it merits a separate and slightly special treatment which the legislature has already done. In addition, the special treatment has been accorded to it in other jurisdictions also," he argued. "The idea is to try and protect the institution of marriage so that there are not any deleterious or psychological impact on the use of word rape", he submitted.

Court cannot enlarge the scope of an offence

It was argued that if Exception 2 to Section 375 is struck down, it will enlarge the scope of an existing offence thereby creating a new species of offence when the legislature had already taken a position to the contrary.

He also argued that while the Courts can issue an advisory or make its mind clear with respect to the issue but cannot dictate the final outcome, as it is within the domain of the legislature. He stressed the issue was more of which is the right forum to raise the issue, the judiciary or the legislature.

Deepak also took the Bench through various provisions under the IPC including Sections 375 and 376B to argue that there are four gradations of sexual offences in the Code.

By submitting so, he argued that there is an intelligible differentia in the manner in which various classes of offences, all of the offences being sexual in nature, are treated differently by the legislature. He pointed out that offences relating to marriage are dealt with separately in the Indian Penal Code under Chapter XX, whereas the offence of rape comes under Chapter XVI which deals with offences against the human body. Hence, it was advanced that there was an intelligible differentia within the Penal Code itself with respect to marriage.

Deepak further argued that context cannot be separated from consent.

"A marriage creates an ecosystem. Marriage casts upon both man and the woman multiple obligations and responsibilities. The issue of consent cannot be divorced from the issue of context," he argued.

Comparision with Section 376B

He referred to Section 376B of the IPC which deals with the offence of sexual intercourse by a husband with wife without her while she is living separately. It was pointed out that as per the provision, the separation could be under a decree of separation or otherwise.  Highlighting this, it was argued that the provision covers a situation where a couple is living separately even without a judicial intervention. It was further highlighted that the punishment for Section 376B is lesser than Section 376.

Therefore, if a current husband is brought under Section 376, it will lead to an anomalous situation as the punishment for a former husband under Section 376B is lesser. It was also highlighted that Section 376B does not use the word "rape" and uses the expression "sexual inrercourse without consent".

He also pointed out that Section 376C deals with sexual offences by persons in position of authority or trust. Husband is not mentioned in that provision. This means that the legislature wanted to treat the husband differently. He also referred to Section 198B CrPC, which says that cognizance of the offence under Section 376B can be taken only on a complaint by a wife, that too after a prima facie satisfaction.  This section was also inserted after the 2013 amendments. So, even in the post-Nirbhaya scenario, the legislature intended a different treatment with respect to husband and wife.

Deepak will now continue his submissions tomorrow followed by rebuttal arguments by Senior Advocate Colin Gonsalves who will be appearing for one of the petitioners.

Yesterday, Advocate RK Kapoor representing NGO Hridey had submitted that sexual intercourse between a husband and his wife in a marital relationship cannot be labelled as rape and at worst, can only be called a sexual abuse. He said that the said fact would be clear from the definition of cruelty as defined under the Domestic Violence Act 2005.

He had also argued that a wife cannot compel the Parliament to prescribe a particular punishment against the Husband to satisfy her ego, while seeking to criminalize the act of marital rape.

Previously, Senior Advocate Rebecca John appearing as amicus curiae in the matter concluded her submissions. She submitted that the retention of exception 2 of Sec. 375 of IPC will not be constitutional.

John had also submitted that availability of other provisions in various legislations including  Sections 498A, 304B of IPC, Domestic Violence Act and other civil remedies, are insufficient to deal with the offence of rape under sec. 375, as regards to a wife alleging rape by her husband.