Communal Far-Right Going All Out In The Name Of Majoritarianism To Attack Freedom Of Speech : N Ram 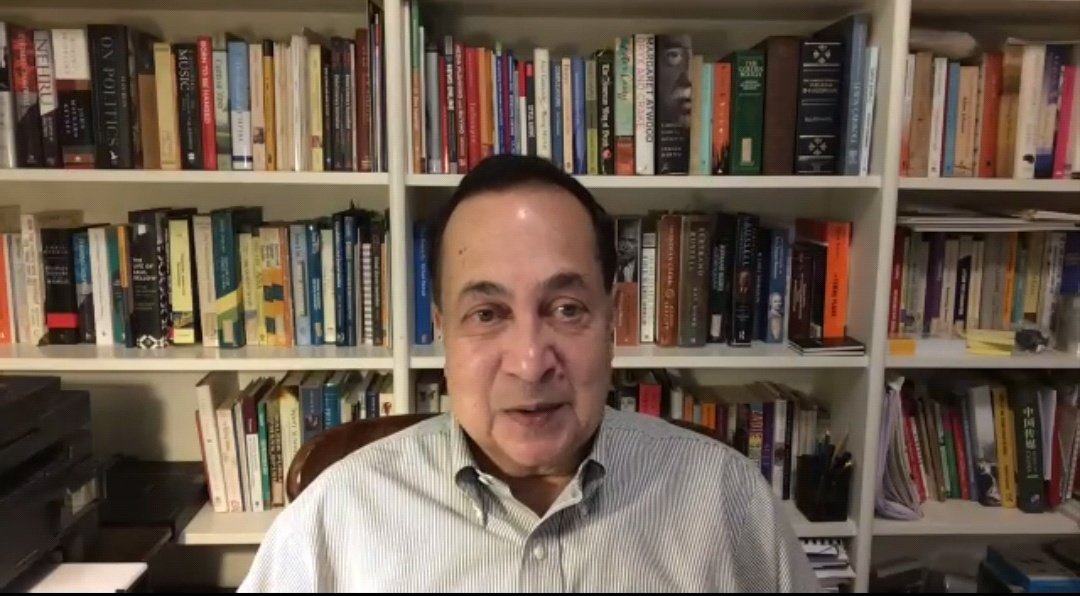 N.Ram, the former editor-in-chief of 'The Hindu', voiced concerns about the emergence of 'communal far-right', which is attacking freedom of speech and causing subversion of institutions.He addressed the "elephant in the room", what he described as the "communal far right", which is "going all out in the name of majoritarianism to attack the freedom of speech" and, in the process, causing...

N.Ram, the former editor-in-chief of 'The Hindu', voiced concerns about the emergence of 'communal far-right', which is attacking freedom of speech and causing subversion of institutions.

He addressed the "elephant in the room", what he described as the "communal far right", which is "going all out in the name of majoritarianism to attack the freedom of speech" and, in the process, causing "a subversion of institutions".

The veteran journalist was addressing the virtual audience at the webinar on 'Criminalising Journalism and Cinema' organised by Live Law.

"There was a time when it was thought that so far as the freedom of press and free speech is concerned, India was an enviable position as compared to the other developing countries. This was some 40 years ago, when we were coming out of the emergency – When journalism was characterised with buoyancy, animal spirit, new opportunities. It was called 'India's newspaper revolution'", he explained.

He referred to the recent instances of arrests and criminal cases against journalists and other artistic persons. "This has widened and exposed the fault lines in the Constitution of India and the law, not just in terms of free speech and the freedom of press but also as regards the rights to the freedom of assembly and movement. The protection is not as good as we believe and there are numerous violations made possible by escape clauses, Executive overreach and the failure of the Judiciary to protect the rights", he said.

Quoting from an article in "The Hindu", he called out the "asymmetry in application of laws"- "There are inconsistencies. It is a mixed bag- while some judgements are good, like the one to free the stand-up comedian Munawar Faruqui. There are some good High Court orders also. We hail and welcome the Supreme Court's order in the Munawar Faruqui case. But it still remains that the High Court did not do the needful in the case. Even after successive hearings, it refused bail. It speaks something about the system. The precariousness in the freedom of press has come to be exposed"

"By and large, the higher judiciary has failed to protect these rights to freedom", declared Mr. Ram.

"The journalists are constantly under pressure and attack. Even though nothing may eventually happen, because the cases are generally flimsy and a lot of relief is available in the law, there is a precariousness in the rights to these freedoms in doing creative work, as we witnessed in the Taandav case. Alhough it is not like the Emergency, which was characterised by total censorship and detention of journalists, but there are enough violations for us to be very, very deeply worried", he continued.

"There is this instance of everyone, from the IT department to the Enforcement Directorate to the CBI, attacking one of the few independent TV channels (NDTV) that we have today. I have seen the papers and the cases are totally baseless", commented Mr. Ram.

He spoke of the tremendous pressure on the owners and proprietors of media platforms– takeovers, desperate sales, editors being forced out, advertisers being threatened.

"In the wake of such vulnerability of the business, the scope of the proprietor protecting the independence of journalism is precarious", he remarked.

He indicated the violence that Delhi in witnessed in February last year over the CAA, the police action and how victims have come to be punished. "It is not just the physical terror, the violence or the force, but there is a majoritarian authority at play"

He cited the example of Tamil Nadu- "In Tamil Nadu, the majoritarian party is weak, as everyone knows it. But after the last Lok Sabha election, their brain cells concluded that Tamil Nadu news channels are to be blamed for doing badly. They put pressure on some of the main ones to change editors. Now, these people are not partisan reporters but professionals, some of whom come from humble backgrounds. While one editor was shown out, there was this other instance where even though the proprietor was under pressure, he said 'we know what is happening in the state and have full faith in our editor' and went on"

"It would be absurd to say that media is acting as the 'fourth estate' of today. International rankings now place India at par with Pakistan in terms of the freedom of speech and of the press...Sachin Tendulkar said 'you can be spectators but you can't participate'. I don't know who taught him this...There are killings of journalists. We are not doomed to live like this", continued Mr. Ram.

Moving on, Mr. Ram cited examples of "bad laws" which he wishes are either struck down or read down and stringent conditions imposed for their invocation- "There are some bad laws – like the criminal defamation. All developed countries have done away with it. So has Sri Lanka. We had a disappointing judgement on this aspect. It needs to be referred to a Constitution bench. Secondly, the element of 'scandalising the court' (in the Contempt of Courts Act) has no place in a democracy. Then there is section 124 A of the IPC on sedition. The Patna High Court had struck it down but unfortunately, the Supreme Court reinstated it. There is the Official Secrets Act – we were protected by the judgement of the Supreme Court in the Rafale case, which concerned the freedom of press and the use of stolen, unauthorised documents. The court said 'do not punish the recipient'. But these laws are all out-of-place, out-of-time and inconsistent with the Fundamental Rights!"

While he termed the business situation in the country as "bad", he credited the commendable work being done by digital platforms like The Wire, The Caravan, The Quint and The Scroll.

"There are some voices on news TV, good articles in mainstream press, magazines, there are bloggers, comedians and other creative persons who have done a good job", he appreciated.

Mr. Ram voiced the assertive view that "this structure of repression"- with its "toxic ideologies", the "Hindu Rashtra project", "in the name of minorities", "other dangerous ideas"- cannot sustain.

"We must resolve to this end and mobilise this. Other countries have shown that strong governments can be defeated – see what happened in the US when the government went far right", he urged.

On the regulation of the media

"I agree that the media needs regulation. In India, we have the worst news TV in the world- hate speech is a major problem with many of them and we must deplore this. There is a need to protect the public against rogue journalism and unauthorised exercise of power by the press", conceded Mr. Ram.

"In the UK, they had a huge problem with tabloids-'red tops', as they called them. Then there was the Leveson inquiry, and what followed was a good model – self-regulation underpinned by statute", advanced Mr. Ram.

He was of the opinion that such a model would be a good proposal for even the Indian scenario- "Here, in India, the regulatory body is a toothless one- it has too many representatives of the press, journalists and even MPs. Why should MPs be on it?"

"The BBC has a public broadcaster- Ofcom looks over its standards. There is a need for somebody to keep a broad-eye on the standards which are laid down by the law and make sure that the standards are maintained", Mr. Ram said.

"You need to build a culture. The legal professionals can be of great help here. There are freelance journalists, who are not backed by big organisations. So a fund can be set up to provide legal support to them.There is a need for partnership between journalists, creative people and lawyers", he suggested.

"We need to build a culture of values and freedom. It is an ongoing process, it began with the freedom struggle and it has to continue. There are obstacles in the way- there are laws which have no place in modern democracy. But we have a good Constitution and structure of laws. Secondly, we need to focus on young people. If you focus on values, these people respond well. But once they move into the newsroom, they go out of sync with what they have learnt at the journalism school. We need to start journalism education and training programmes, bring in experts. These young people are innocent of the ways of the world, but if we teach them values like dissent, it will go a long way", Mr. Ram expressed, signing off.