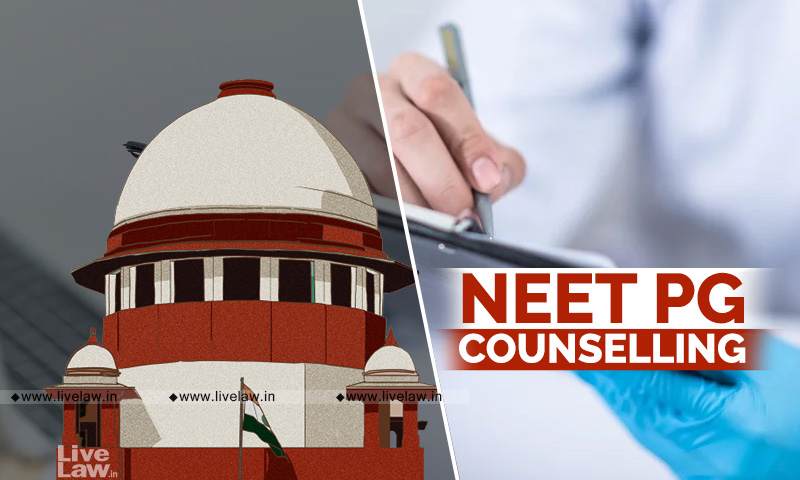 In the NEET-PG Counselling matter, the Supreme Court on Wednesday agreed to consider tomorrow the issue related to the counselling process in the State Quota in Maharashtra.An application has been filed by a group of doctors seeking a clarification that the restriction in the March 31 order of the Supreme Court for State Quota candidates to join Mop-Up round applies only to those...

In the NEET-PG Counselling matter, the Supreme Court on Wednesday agreed to consider tomorrow the issue related to the counselling process in the State Quota in Maharashtra.

It may be noted that the bench headed by Justice DY Chandrachud on March 31, 2022 had cancelled the Mop-Up Rounds and directed the holding of a Special Round of Counseling for the 146 seats and has allowed students who have joined the AIQ or the State Quota in Round 2 to participate in this round for 146 seats.

The Court has also upheld the March 16 advisory which prevents students who have taken seats in State Quota after Round 2 from participating in the Mop-Up.

On Wednesday, the application was mentioned for urgent listing before a bench led by Justice Chandrachud.

Advocate Sachin Patil, for the State of Maharashtra, told the bench headed by Justice D. Y. Chandrachud, "By your lordships order dated 31st March, now they are prevented to participate in All India quota. For them, we gave a choice that, as the mop up round of all India quota is cancelled, we gave them a choice to come and join again in the second round state quota. We gave them the choice that they can come and join by 5 PM today"

The advocate for the applicants urged, "We don't want that. We want our earlier status to be reinstated"

When the bench agreed to hear the matter on Thursday, it was prayed on behalf of the applicants that the process not be locked at 5 PM, as intended by the state.

However, Justice Chandrachud merely remarked that the Court will be considering the matter on Thursday.

"In line with the regulations which have been notified on 5 April 2018, students who have joined in round 2 of the state quota or round 2 of the AIQ shall not be eligible to participate in the mop-up round for All India Quota."

It is stated that the Applicants had exercised their choice to resign from their seats in accordance with the Notice No. 8 dated 17.3.2022 within the stipulated deadline. Therefore, it is prayed that the restriction in Para 3(v) against participation in Mop-Up Round should not apply to such candidates who resigned from State Quota before 31.03.2022.

In a related development, the Supreme Court on Tuesday clarified that a candidate will lose the seat allotted in Round-2 of All India Quota Counselling only if she joins a seat allotted in the Special Round for the newly added 146 seats.

The Court clarified the Frequently Asked Questions(FAQ) list issued by the Medical Counselling Committee for the Special Round. As answer to FAQ Number 2, the MCC had stated "If you are allotted a seat in Special Round you will have no claim on the earlier /old seat".

A contempt petition was filed against the FAQ alleging that it was contrary to the Court's order passed on March 31. It was submitted that mere allotment of seat in the Special Round should not result in the loss of seat allotted in Round 2.

A Bench comprising Justices DY Chandrachud, Surya Kant and Bela M Trivedi clarified that FAQ No.2 should mean as if a candidate is allotted and have joined the seat allotted in Special Round, the old seat will be lost. The Bench stated so based on a clarification made by Additional Solicitor General Aishwarya Bhati.

The Bench stated in the order as follows :

"On 2nd April, a notice was issued by the DGHS of Union Govt. The notice sets out FAQ's with answers. During the course of hearing, it has been Clarified that the last sentence to FAQ 2 above should correctly read as follows, "IF YOU ARE ALLOTTED AND HAVE JOINED A SEAT IN SPECIAL ROUND YOU WILL HAVE NO CLAIM IN OLD SEAT"