[Breaking] No Coercive Action Against Employers On MHA Order For Full Payment Of Wages : SC 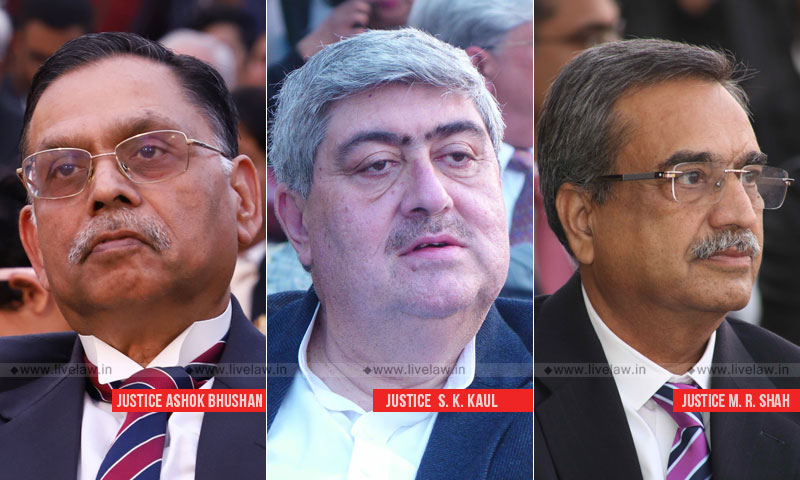 The Supreme Court on Thursday passed an interim order that no coercive action should be taken against employers for failure to comply with the March 29 order of the Ministry of Home Affairs (MHA) for full payment of wages.The Court reserved orders for June 12 on the petitions challenging the MHA notification and restrained coercive action till then. "No coercive action will be taken...

The Court reserved orders for June 12 on the petitions challenging the MHA notification and restrained coercive action till then.

"No coercive action will be taken against any employers pursuant to March 29 MHA order. Therefore, interim order to continue till June 12. All parties given liberty to file written submissions within three days", ordered a bench comprising Justices Ashok Bhushan, S K Kaul and M R Shah.

The direction issued by the Ministry of Home Affairs was intended to prevent human suffering amid the national lockdown, said Attorney General, KK Venugopal.

"The notification is for preventing human suffering", said the AG in response to a batch of petitions challenging the order issued on March 29 invoking the powers under Disaster Management Act.

"People were migrating in crores, they wanted the industries to continue. The notification was to keep the workers put, they would only stay put if they are paid", the AG explained.

The AG also submitted that the National Executive Committee under the Disaster Management Act can issue the notification, as the Act gives it wide powers "lay down guidelines of any kind" to deal with disasters.

The bench comprising Justices Ashok Bhushan, S K Kaul and M R Shah however raised concerns regarding the viability of direction to pay 100% wages when the industries and establishments were forced to shut down.

"We are concerned with 29 March notification. It asks for 100 per cent payment and prosecution. We have reservations over this. Some discussion should be held to work out some solution for this period of time", Justice S K Kaul observed.

The bench also noted that the Government invoked Disaster Management Act, instead of the Industrial Disputes Act, and insisted that employers should pay 100% wages.

"The question is do you have power to get them to pay 100 per cent and on their failure to do so, prosecute them...There is a concern that workmen should not be left without pay, but industry may not have the money to pay", Justice Kaul remarked.

The bench said that there has to be negotiations with the industry, and government should play the role of a facilitator.

"We can find out via media. Give us a practical solution", the bench told the AG.

"The most appropriate thing would be to consider the humanitarian situation due to which this order was issued", he said.

The bench also invited the AG's attention to the prayers of some petitioners seeking to direct the Government to subsidize wages.

The AG replied that the Government has already taken a decision to infuse Rs.20,000 crores into the MSME sector.

The bench stressed that there should be negotiations with the employers.

"Some negotiations have to happen between employers and workmen to iron out what to be done for the salary for these 54 days", Justice Bhushan observed.

Justice S K Kaul added "On one hand you say you're trying to put money in the pocket of worker, so now some negotiation is required for a solution".

Financial incapacity not a ground to challenge the order : MHA affidavit

Earlier, the MHA filed a counter-affidavit in the cases, defending the March 29 notification. Financial incapacity cannot be a reason to challenge the notification, the MHA said.

"Financial incapacity is a legally untenable ground to challenge a direction issued by a competent authority in the exercise of its statutory power", stated the MHA's counter affidavit.

The MHA explained that directions were a temporary measure to "mitigate the financial hardship of the employees and workers specially contractual and casual during the lockdown period."

The MHA also informed the Court that the March 29 notification has ceased to have with effect from May 18.

On May 15, the SC had passed an interim order in the petitions filed by Hand Tools Manufacturers Association and Jute Mills Association that that no coercive action should be taken against the petitioners for non-compliance of the MHA direction.

On May 26, the SC had issued extended the interim orders passed in the cases of Hand Tools Manufacturers Association and Jute Mills Association

The petitions challenged the order issued by Home Secretary on March 29 invoking powers under Section 10(2)(l) of the Disaster Management Act 2005, which directed as follows :

"All the employees, be it in the Industry or in the shops and commercial establishments, shall make payment of wages of their workers, at their work places, on the due date, without any deduction, for the period their establishments are under closure during the lockdown"

The MHA direction was challenged as unreasonable and arbitrary and as violative of the fundamental right to trade and business of the employers. Since operations are completely shut down during the lockdown, it is impossible for the employers to continue to bear the burden of full salary of employees, the petitioners submitted.

The petitioner(s) have also raised the argument that the impugned direction was beyond the scope of powers conferred under the Disaster Management Act.

"Interpreting Section 10(2)(l) of the Disaster Management Act 2005 as conferring power on the Central Government to direct Private Establishment to make full payment of wages to the employees during the lockdown period is arbitrary and violative of Articles 14, 19(1)(g) and 300A of the Constitution of India", said one of the pleas.